FERC's latest monthly "Energy Infrastructure Update" report (with data through November 30, 2020) also reveals that natural gas accounted for 29.0% of the total, with very small contributions by coal (20 MW), oil (5 MW), and "other" sources (5 MW) providing the balance. There have been no new capacity additions by nuclear power or geothermal energy since the beginning of the year.

Moreover, all of the new generating capacity added during the past six months (i.e., June through November) was provided by wind (2,987 MW), solar (2,218 MW), and hydropower (24 MW). In November alone, all new U.S. utility-scale electrical generation capacity added was attributable to five new “units” of wind (882 MW) and ten units of solar (626 MW).

In addition, FERC data suggest that renewables’ share of generating capacity is on track to increase significantly over the next three years (i.e., by November 2023).  “High probability” generation capacity additions for wind, minus anticipated retirements, reflect a projected net increase of 27,622 MW while solar is foreseen growing by even more - 32,784 MW. By comparison, net growth for natural gas will be only 21,489 MW. Thus, wind and solar combined are forecast to provide nearly three times as much new generating capacity as natural gas over the next three years.

While hydropower, geothermal, and biomass also are all projected to experience net growth (1,018 MW, 178 MW, and 105 MW respectively), the generating capacities of coal and oil are projected to plummet - by 22,621 MW and 5,055 MW respectively. In fact, FERC reports no new coal capacity in the pipeline over the next three years and just 6 MW of new oil-based capacity. Nuclear power is likewise forecast to drop sharply - by 4,330 MW, or more than 4% of its currently operating capacity.

In total, the mix of all renewables will add more than 61,707 MW of net new generating capacity to the nation’s total by November 2023 while the net new capacity from  natural gas, coal, oil, and nuclear power combined will actually drop by more than 10,500 MW .

In fact, renewables’ share could - and probably will - be even higher. Over the past 22 months, FERC has been regularly increasing its renewable energy projections in the monthly “Infrastructure” reports. FERC's first such projection - provided in its March 2019 report - forecast the addition of 24,560 MW of wind and 12,048 MW of solar during the ensuing three years. In its most recent report, those forecasts had grown to 27,622 MW of new wind capacity and 32,784 MW of new solar over the next three years.

"FERC's projections for strong growth by renewable energy sources, especially solar and wind, may very well prove to be unduly modest,"  noted Ken Bossong, Executive Director of the SUN DAY Campaign. "With a very supportive incoming Biden Administration, coupled with Democratic majorities in the U.S. Senate and House of Representatives, this trend should not only continue but rapidly accelerate during the next few years."

[1] Capacity is not the same as actual generation. Capacity factors for nuclear power and fossil fuels tend to be higher than those for most renewables. For example, for calendar year 2019, the U.S. Energy Information Administration (EIA) reported that renewables accounted for 18.2% of the nation's total electrical generation - that is, somewhat less than was their share of installed generating capacity (22.1%) for the same period. Conversely, coal's share of generating capacity in 2019 was 20.9% while its share of electrical generation was 23.3%.

[2] FERC generally only reports data for utility-scale facilities (i.e., those rated 1-MW or greater) and therefore its data do not reflect the capacity of distributed renewables, notably rooftop solar PV which - according to the EIA - accounts for nearly a third of the nation's electrical generation by solar. That would suggest that the total of distributed and utility-scale solar capacity combined may be as much as 50% higher than the solar capacity of 4.2% reported by FERC -- i.e., closer to 6%.

FERC's 6-page "Energy Infrastructure Update for November 2020" was released on January 5, 2021. It can be found at https://www.ferc.gov; open the link "Industries and Data," then follow to "FERC Staff Reports and Papers," and then to "Energy Infrastructure." For the information cited in this update, see the tables entitled "New Generation In-Service (New Build and Expansion)," "Total Available Installed Generating Capacity," and "Generation Capacity Additions and Retirements."

The U.S. Energy Information Administration issued its "Electric Power Monthly" report for calendar year 2019 on February 26, 2020. It may be found at: https://www.eia.gov/electricity/monthly

Follow the link to "previous issues" and then to "December 2019". The data cited in this update can be found at, or extrapolated from, Tables ES1.A and ES1.B.

Renewable energy sources now account for 23.52% of the nation’s total available installed generating capacity and continue to expand their lead over coal (19.97%).

Encouraging progress-- and it's not just capacity, EIA recently reported about renewable generation passing that of coal: https://www.eia.gov/todayinenergy/detail.php?id=46142

Forget coal, coal is toast. When will wind and solar will pass methane, aka "natural gas"?

Here's when: never. Shell and Chevron are counting on wind and solar to deliver unending profits, buoyed by the errant enthusiasm of "renewable" energy advocates and trillions of cubic feet of gas reserves. 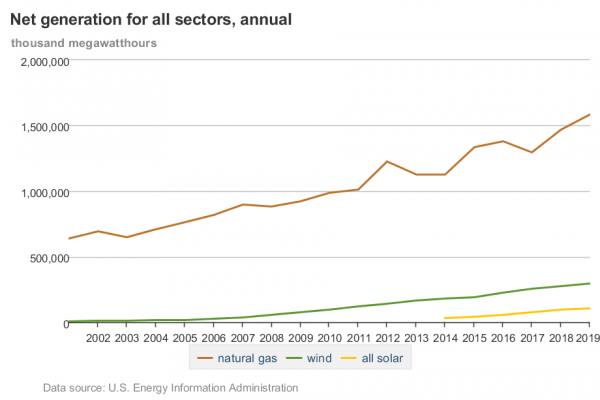 U.S. Energy Information Administration (EIA) reported that renewables accounted for 18.2% of the nation's total electrical generation - that is, somewhat less than was their share of installed generating capacity (22.1%) for the same period.

Even more encouraging is that renewables´ total generation is much closer to installed generating capacity than some would have us believe.

Offshore wind developments will drive the numbers for both actual and capacity higher in the next few years.

A high school journalism teacher once told me, "If a news article's headline ends with an exclamation point, it's not news." This article is a perfect case in point.

We can take all of the inflated capacity numbers and divide by (at least) five. Because treating solar "capacity" as "electricity" assumes a capacity factor of 100% - the ridiculous premise it's noon on a sunny day, and stays that way forever. Especially when it's compared to nuclear energy, which consistently has a capacity factor of > 92% - one often over 100%.

"How can any source of energy have a capacity factor over 100%?", you ask.

Here's how: capacity is based on rated capacity at time of installation. Unlike solar farms, which produce an average of 1% less electricity each year, state-of-the-art nuclear plants like Diablo Canyon in California, through improvements in plant efficiency, actually generate more clean energy than they did when they were built 35 years earlier.

"But Bob, how many times have you told us 'efficiency is irrelevant for nuclear energy'...hmm?"

After a plant's capital costs are recovered, it's true - efficiency is irrelevant. By then, all we're considering are the costs of operation, and uranium is cheap, emissions are nil. So a plant could even be operating at less than it's rated capacity and still be economical.

One of the biggest criticisms of nuclear energy, however, is its costs of construction - its capital costs - and it shouldn't be. When electricity customers invest in a new nuclear plant, their investment improves over time.