On July 31, 2020, Public Service Enterprise Group (PSEG) announced that the company is exploring strategic alternatives for subsidiary PSEG Power’s non-nuclear fleet, including about 6,750 MW of fossil generation and about 467 MW of solar resources.  The company’s Chairman, President and CEO Ralph Izzo, said, “Our intent is to accelerate the transformation of PSEG into a primarily regulated electric and gas utility – a plan the company has been executing successfully for more than a decade.”  In the company’s news release, Izzo went on to say, “a separation of the non-nuclear assets would reduce overall business risk and earnings volatility, improve the company’s credit profile and enhance an already compelling ESG (Environmental, Social and Governance) position driven by pending clean energy investments, methane reduction, and zero-carbon generation.”

There are several rating agencies producing ESG scores and risk factors that take into effect exposure (material issues like climate, and other factors), and management, (which includes leadership direction, practices, and policy).  On July 6, 2020, financial services company Morningstar acquired ESG ratings and research firm Sustainalytics.  The company’s ESG Risk Ratings represent a well-known benchmark among institutional asset managers, pension funds, and other financial market participants.  The current Sustainalytics ESG Risk rating for PSEG is 29.2, ranking the company 119 of 466 utilities tracked.  The Risk Rating positions PSEG as ‘high’ on exposure and ‘strong’ on management.  One of the lowest ESG Risk ratings in the utility sector is Iberdrola, S.A. with a score of 17.3 (8/466) with a ‘low’ rating on exposure and a ‘strong’ rating on management.  In comparison to the ratings above, consider the following Sustainalytics ESG Risk Scores by large investor-owned companies: Ørsted (20.9), Enel SpA (23.4), Exelon (24.3), NextEra Energy (29.8), Southern Company (32.1), Duke Energy (33.0), and American Electric Power (34.9).

By divesting the remaining fossil fleet, which is primarily made up of natural gas and coal power resources, PSEG will be in a strong position to lower the company’s ESG Risk Score.  Over the past decade, PSEG has made great strides reducing the company’s carbon footprint by retiring and phasing back coal as a core power generation fuel.

In the news release, CEO Izzo added, “We are proud to have served the needs of our customers and key stakeholders for the last 117 years and are excited to explore new opportunities.”  He went on to comment that, “It is a future focused on advancing our business as a sustainable, customer-focused provider of essential electricity and natural gas services.”

The company continues to evaluate an investment in offshore wind and expects a decision regarding the opportunity to invest in Ørsted’s Ocean Wind offshore development project later this year.  The proposed 1.1-gigawatt (GW) Ocean Wind, if approved and financing is secured, is expected online in 2024.  PSEG is considering acquiring a 25% share of the project.  The company is also evaluating participation in other upcoming offshore wind solicitations in New Jersey and other Atlantic coastal states.

The strategy is to retain nuclear assets

The company anticipates the non-nuclear fuels strategic evaluation to launch later this year and be completed sometime in 2021.  Goldman Sachs and Wachtell, Lipton, Rosen & Katz have been engaged by PSEG as advisors for the evaluation.  The company cited that the transition from fossil fuel power would accelerate their transition to a primarily regulated and contracted business, with zero-carbon generation.

Over the past two decades, the ratio of fossil fuel electricity production to nuclear power production has remained relatively flat but the shift within fossil from coal to natural gas has been significant.  According to data compiled by Hitachi ABB Power Grids’ Velocity Suite research team, as recently as 2005, coal accounted for 38.2% (21.4 million MWh) of the company’s total electric generation.  In 2019, coal accounted for only 6.7% (3.9 million MWh) of all electricity production from owned power plants.

Nuclear has been a mainstay contributor to PSEG’s overall fuel mix for decades.  During 2019, nuclear powered 30.2 million MWh – representing 52.2% of the total fuel mix. 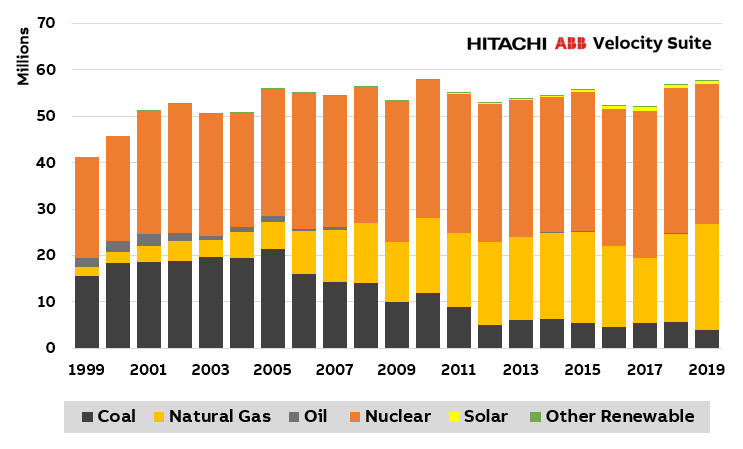 There are nine operating fossil fuel plants PSEG either owns outright or partially.  The list below includes the largest six facilities based on electric output in 2019: 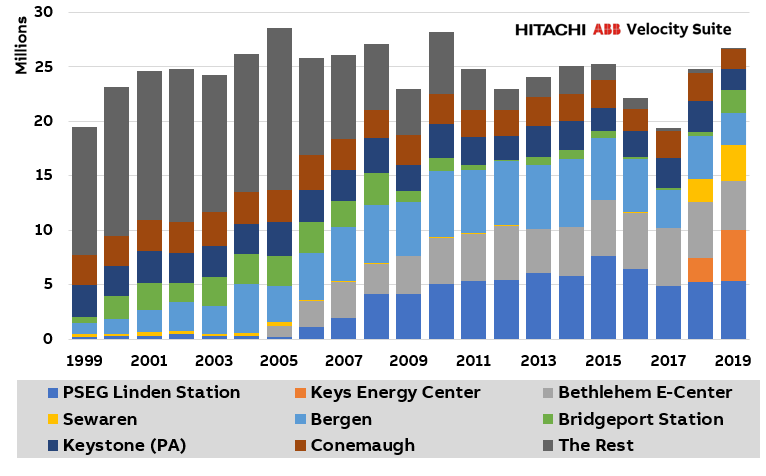 PSEG on a fast track to phase out fossil generation

The company has closed or sold off interest in several fossil plants over the years including the following coal plants:

PSEG Power produced 57.7 million MWh from owned facilities in 2019, with 52.2% (30.2) generated at nuclear power plants and 39.7% (22.9) at natural gas-fueled plants.  Coal accounted for just 6.7% of the fuel mix in 2019, while solar and other renewables contributed 1.4%.  With the sale of PSEG’s 23% shares in Conemaugh and Keystone in 2019, coal’s share is expected to all but disappear. The only operating coal plant in PSEG’s portfolio is Bridgeport Station in Connecticut, but so far in 2020, the facility is only burning natural gas at the combined-cycle units that came online in 2019.  The two coal units, built in the late 1960s, are planned for retirement next year.

The closing or divestiture of PSEG’s fossil assets will go along way towards improving the company’s ESG rating and will keep the company on track to become one of the most carbon-free power companies in America.

Are any of these nuclear assets at risk of closure in the coming years, whether due to licenses running out or outside pressure?

Hi Matt, I am not sure about liceneses . . . but most nuclear plant owners and operators have been able to extend their operating licenses when they refile.  Nuclear represents a large source of zero-carbon power which is important to most utilities trying to reduce their carbon-footprint to meet state and corporate goals.

Kent - as normal, great data and analysis.  This is a concerning trend where individual companies are improving their ESG ratings by selling assets to others.  They will still own the regulated transmission and distribution assets that generate guaranteed returns while delivering the same electricity generated in the same way by different owners.  Classic moving of capital with no significant improvement in the overall situation.  Several of their gas plants are less than 5 years old so high quality assets that based on just consumer demand will have to run for decades.  Not sure if the regulators get caught up in this "improvement" of the environmental part of their ESG rating, I am sure that the plant employees will not get much help on the "S" part of ESG.

Gary, thanks for your comments.  Like you point out . . . most of the targeted divestiture is gas plants that are relatively new.  I would think they'll continue to operate.  The grid still needs quick dispatchable resources for when the market is stressed from extreme weather, and in the future, when more and more intermittent generating renewables come online, they'll need the gas plants even more.