Nuclear reactions at Chernobyl are spiking in an inaccessible chamber

Subreactor room 305/2, which has been inaccessible since the Chernobyl meltdown 35 years ago, is emitting neutrons that point to a growing nuclear fission reaction

Nuclear reactions at Chernobyl are spiking in an inaccessible chamber

Subreactor room 305/2, which has been inaccessible since the Chernobyl meltdown 35 years ago, is emitting neutrons that point to a growing nuclear fission reaction

Charley, though this "analysis" by two computer programmers in the Ukraine is the height of irresponsibility, they've managed to get a lot of attention. Which seems to be the goal of every anti-nuclear activist, these days.

Bob-- can you provide a reference disputing the findings/their implications? I'd love to read more from thought leaders that are providing this other viewpoint

Matt, at this moment there are two computer programmers telling us that radioactivity in Subreactor Room 305/2 is increasing. How much, or how fast, or for how long, we have no idea. It's quite possible flooding of the chamber has increased radioactivity there - slightly. Water is a moderator - it slows neutrons emitted either by fission or natural decay - and makes them more likely to bump into another nucleus and keep the reaction going.

But since 1986 radiation in the reactor sarcophagus, in the surrounding area, and around the world from Chernobyl is >1/100 of what it was in 1986. Hyperbole like "nuclear reactions are spiking", or that they might lead to "a runaway nuclear reaction" is only slightly less silly than believing transuranic waste from Three Mile Island would burn a hole all the way through the Earth to China (after viewing The China Syndrome in 1979, many Americans honestly believed it was possible).

Though Chernobyl remains part of an official exclusion zone, many areas are less radioactive than areas in the United States. Homes in Chernobyl average .2 µSv/h (microsieverts/hour), the same as standing next to the granite countertop in my kitchen in Burbank, CA, and only slightly more than standing my backyard: 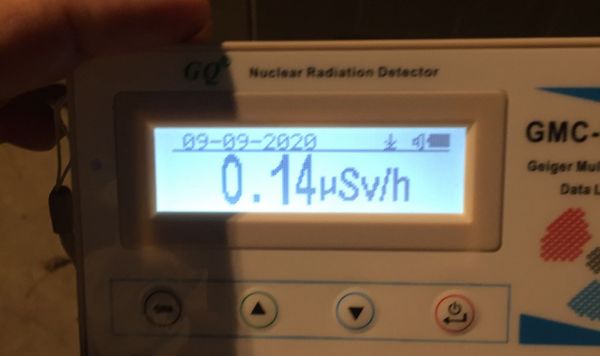 People would think you were crazy if you walked the roads around Unit #4, which remain at elevated levels to this day (2.4 - 2.6 µSv/h), but wouldn't think twice about hopping on a round-trip flight to NYC. On the way, they'll be exposed to even more radiation for a period of hours - both ways: 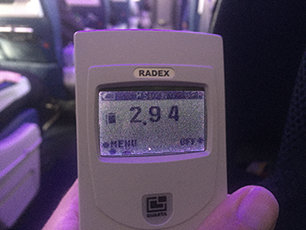 Where Audra lives near Denver, residents are exposed to 1.30 µSv/h night and day. Part of the radiation is from living at altitude, but more comes from radon gas seeping from the ground. Interestingly, cancer rates are markedly lower in the Denver/Boulder area than they are in most metropolitan centers, though, a phenomenon that isn't well understood. Some hypothesize it's because Coloradans live a healthier lifestyle, an explanation frequent visitors like me would find credible (very few natives are overweight). A more controversial hypothesis, known as hormesis, is that constant exposure to radiation makes one more resistant to it.

I have no reason to doubt reports from the computer programmers at Chernobyl. But over and over again, journalists or armchair experts latch onto these relatively benign statements and exaggerate them simply because it multiplies pageviews at their website, or draws listeners to their podcast. There's no evidence that will change anytime soon. But we have to start putting things in perspective - to understand that any risks we accept by powering the world with this amazingly energy-rich, clean source of energy are far outweighed by its benefits.

Not sure I have anything to say about this topic specifically other than it does sometimes seem like some of the news published today is more about clickbait than reporting real scientific data. The article Charley shared below is behind a gate so I did not access it.  But, I would love the community to follow this story to see if any additional information is shared. This whole story fascinates me.

On another note,  I had to comment about Colorado.  We had the issue with Rocky Flats in Boulder and I thought at one point we had reported a higher rate of cancer from those who lived nearby (but not positive on that).  In any case, we do tend to be more outdoorsy and active.

Audra, I was able to access the article - don't know why - but here are my two cents: