Maple Grove, Minnesota-headquartered Great River Energy announced earlier this month that the company would be retiring their 1,210 MW Coal Creek Station.  The 40-year-old plant is located just southwest of the community of Underwood, North Dakota, about 50 miles north of the state’s capital city Bismarck. The power plant is one of the most reliable, safe, and low-cost coal-fueled generators in the United States. 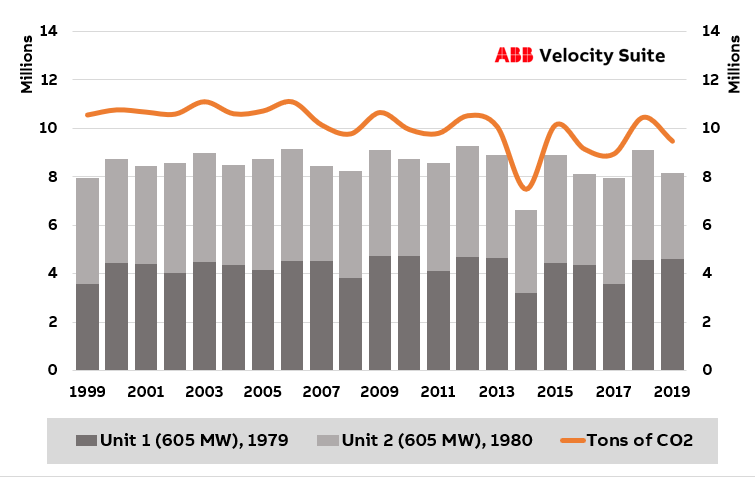 The early closure is set for the second half of 2022.  The company cited unfavorable economics as the primary driver behind their decision.  The generation and transmission cooperative serves roughly 700,000 customers through 28 distribution member cooperatives spread across Minnesota.

Construction on Coal Creek Station began in the fall of 1974.  The plant started generating electricity from unit 1 in 1978 and from unit 2 in 1980.

Falkirk Mining Company, a subsidiary of the North American Coal Corporation of Plano, Texas, is the operator of the nearby Falkirk mine, which is the sole supplier of coal to the plant.  The mine produces roughly 8.5 million tons of lignite grade coal per year.

Power is transmitted to the Minnesota market via a 436-mile high-voltage direct-current (HVDC) transmission system that ties Coal Creek Station to a DC/AC converter station in Dickinson, Minnesota, just west of the twin cities of Minneapolis and St. Paul.

Along with the large volume of electricity production, the power plant provides steam to the Blue Flint Ethanol project located next to the power plant.  Blue Flint, a partnership of Great River Energy and Headwaters Incorporated, produces about 50 million gallons of ethanol per year.

The decision to retire the plant comes only one year after the completion of a $130 million HVDC transmission system upgrade undertaken by ABB.  The project was completed ahead of schedule and under budget.  Actual construction began on March 7, 2019, and was completed on May 17, 2019.  The 74-day upgrade effort involved the replacement of all the equipment in the converter stations including replacing conversion equipment (valves), controls, cooling towers, and smoothing reactors as well as updating the DC switchyards.

The newly upgraded transmission project is one of the most valuable grid assets in Great River’s portfolio.  ABB built the original HVDC transmission system back in 1978, at about the same time the first unit came online at the power plant. The transmission asset has value within the region’s Midcontinent Independent System Operator (MISO) power market, with the potential to enable additional wind resources in North Dakota a path and a market to the urbanized load centers in Minnesota and possibly further eastward.

The company has explored selling or even giving the plant away but so far has not found any takers.  North Dakota government officials would like to find a buyer for Coal Creek Station, which is an important baseload power asset in the state.

The relatively low production costs combined with the valuable HVDC transmission connection between Coal Creek and the converter station in Minnesota looks like an attractive proposition on the surface, but with Minnesota’s current Renewable Portfolio Standards (RPS) calling for 31.5% this year for Xcel Energy, and 25% by non-IOU utilities like Grand River Energy by 2025, it will be difficult to find a buyer for the electricity.  Xcel Energy plans to shut down all (4) of their coal plants in Minnesota between 2023 and 2030, and that could create an opportunity to receive additional wind power from North Dakota wind farms via the recently upgraded HVDC transmission connection. 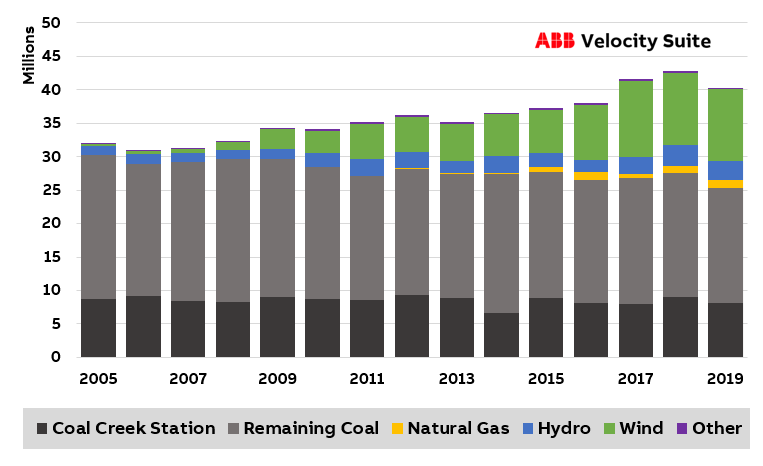 Despite North Dakota’s large position as an oil and gas producing state, natural gas as a power fuel has a relatively small footprint.   In 2019, power production from the state’s 3 natural gas power plants generated only 3.2% (1.3 Million MWh) of total output.

To replace Coal Creek’s energy, Great River has plans to contract for 1,100 MW of wind capacity from five projects, with four located in Minnesota and one in South Dakota. The wind farms are expected online by the end of 2023.  The estimated $1.2 billion investment will allow the company to produce about two-thirds of their power supply from wind – today the company derives about 50% of its supply from coal.  After the plant is officially shut down, Great River estimates its carbon emissions will fall by 95% from where they stood in 2005.  The company also plans to convert its smaller coal-burning Spiritwood plant (106 MW), located in Stutsman County near the community of Spiritwood, to burn natural gas.  Spiritwood currently provides steam for the Dakota Spirit ethanol plant near Jamestown, ND.  In order to meet the need for dispatchable power once Coal Creek is shuttered, the company will turn to their roughly 1,300 MW of operating natural gas units.

Along with the announcement to close Coal Creek in 2022 and the wind buildout investment, Great River announced they will build a pilot long-term energy storage project developed by Massachusetts-based Form Energy.  The storage project will employ new battery technology that allows for up to 150 hours of storage.  The 1 MW pilot project will be operational in late 2023.  Along with the resource shift from coal to renewables, Great River intends to purchase additional power in the competitively-priced MISO market in the years to come.

Driven by ever-increasing renewable portfolio standards, investment preferences, and most importantly, the economics of operating coal facilities, the nation’s coal fleet is quickly shrinking.  For Great River Energy, further downward pressure on the utilization of fossil fuels is driven by the fear of losing the support of their distribution members companies.  Great River Energy, like several other generation and transmission (G&T) cooperatives spread across the country, is adopting renewable energy quickly.  Meanwhile, there are ongoing debates on how the stranded fossil investments will be spread across members.  Grand River made the decision to close Coal Creek by looking closely at the economics and the needs of its member company customers.

On the other hand, the valuable, recently upgraded HVDC transmission asset has great value for moving electricity from windfarms located in the area of the power plant, which is near the Missouri River valley (one of the best wind resource areas in the United States), to urban load centers in Minnesota and beyond.

The clarity of knowing what you want!

In the quest of development, we are exploiting the mother nature recklessly and injecting poison in the natural environment. Now this has exceeded the limit, earth’s surface is getting warmer, the ecological system of earth started dying. This..

World-first hydrogen-to-homes networks will use clean offshore wind power to heat homes while cutting out carbon.Hydrogen end to end system Scotland Join at at he hydrogen for heat https://bit.ly/3qmNcVE professionals group

Laurent, thanks. The focus and desperation of renewables supporters to convince us nuclear is in its death throes can only be viewed as an...

I don't know that I'd go so far as saying the nuclear industry is in need of an autopsy-- if I'm comparing it to a person's lifetime, maybe it's be

Matt commented on ...
Jumping on the bandwagon: EDF embraces hydrogen and carbon capture in bid to keep Sizewell C relevant

We're lucky to be in a moment where there's such a suite of potential solutions out there to transform the industry-- there's no silver bullet...