Adopted in 2015, 196 countries signed the Paris Climate Agreement (to date 188 of them have ratified it) accepting global ambition to limit global warming to “well below” 2C and adding an aspirational goal of limiting warming to 1.5C. The Paris deal also commits signatories to balance greenhouse gas emissions and sinks in the second half of this century.  This has become understood to mean “Net Zero” emissions.

By the end of August 2020, over 125 countries (including the European Union) had set or were actively considering long-term net-zero emissions targets by about 2050.  As opposed to strategies to simply reduce emissions by 20 or 30%, a net zero target requires finding ways to totally eliminate fossil emissions and meet all of our energy needs with very low carbon options. 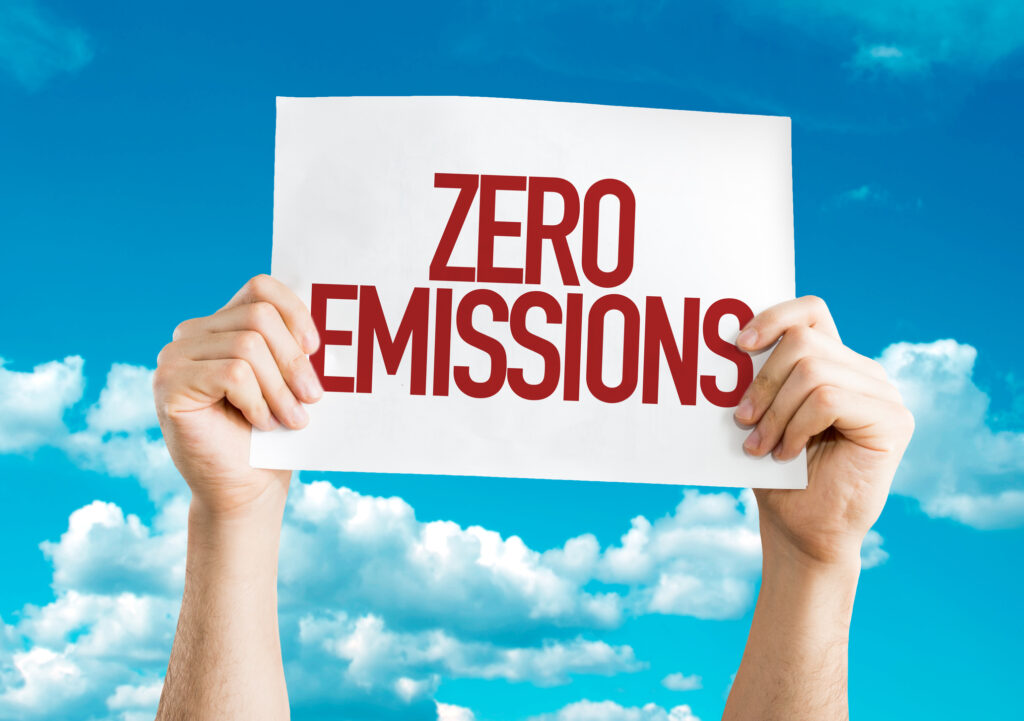 The magnitude of the challenge is enormous, and more and more governments are realizing this means there is no single technology that can provide the complete solution.  Rather, the time has come to stop thinking about competition between different energy sources and instead look at how they can best work together if there is to be a realistic chance of success.

In its current World Energy Outlook (WEO 2020), the International Energy Agency (IEA) recognized this push to net zero. In addition to its traditional Stated Policies Scenario (STEPS), based on today’s policy settings and Sustainable Development Scenario (SDS) which examines what actions would be necessary to achieve 2030 climate goals; it created a new scenario, the Net Zero by 2050 (NZE2050) scenario to show a possible path for the world to reach net zero by 2050.

The NZE2050 scenario assumes large reductions in energy demand and massive increases in renewable generation, with a modest increase in nuclear power, all to replace fossil fuels which show dramatic decline.  This is a useful exercise.  However, rather than provide a clear path to net zero, this scenario succeeds in demonstrating the sheer magnitude of the challenge ahead if we are to meet this ambitious goal.

For example, in this NZE2050 scenario primary energy demand falls by 17% between 2019 and 2030, to a level like 2006, even though the global economy is twice as large.  This would be achieved through electrification, efficiency gains and behaviour changes.  To put this in context, this same report estimates that energy demand will fall by about 5% in 2020 because of the global covid pandemic and the associated reduction in economic activity.  It also points out there will be around 660 million people who will not have access to electricity and 2.4 billion who will not have access to clean cooking by 2030 globally if we stay on the stated policy scenario path. This makes it very hard to imagine achieving a demand reduction of 17% by 2030 with a fully recovered healthy global economy while trying to bring energy to those that are currently under served.

And yes, we certainly do agree that solar development has been nothing short of astounding and fully support continuing with this rapid growth.  At the same time, it is hard to imagine the optimum solution to massive energy transformation requiring the large-scale replacement of much our energy infrastructure could be led by the electricity source (solar) that has the lowest energy density (requiring huge amounts of land) and that produces electricity only between about 13 and 23% of the time (when the sun shines).  The WEO recognizes this large growth in variable renewables leads to issues related to system flexibility and creates further challenges requiring large investments in infrastructure including new sources of energy storage.

On the positive side, the IEA, as do many others, now clearly acknowledge that nuclear power is an important low carbon source of energy and that it must play a role.  In its analysis, nuclear and renewables grow while fossil use drops.  The problem is that in this scenario, nuclear power only grows by about 36% to 2050.  The result is the global share of nuclear hardly moves from today with renewables left to do the heavy lifting.

A larger nuclear share would provide energy security, reliability and be cost effective, mostly by reducing the large system (flexibility) costs required to implement such a large share of variable renewables all while reducing the pressure to reduce overall energy use.  The IEA itself acknowledges that nuclear power plays a much larger role in many Intergovernmental Panel on Climate Change (IPCC) 1.5 °C scenarios, than in its NZE2050. (Half of IPCC 1.5 °C scenarios imply an increase in nuclear generation of 60% between 2019-30 compared with a 36% increase in the NZE2050).

The nuclear industry through the World Nuclear Association (WNA) has proposed its Harmony goal of 25% electricity generated from nuclear by 2050.  This means about 1,000 GW (1000 large reactors) of new nuclear by then, which would be equivalent on an energy delivered basis to the growth assumed for solar adding a large amount of always on, 24/7 energy to the system.  Achieving this goal requires strong commitments from governments and industry.  This would complement the growth in renewables nicely and result in less pressure on demand reduction, less issues with flexibility requiring less infrastructure development and an overall lower cost energy system.

We are seeing exceptional innovation as vaccines for covid are being made available in time frames never before seen to address this pandemic.  This shows what we can do as a society when we all work together to a common goal.  As stated by Associate Deputy Minister of Natural Resources Canada Shawn Tupper in a web chat with OECD Nuclear Energy Agency Director-General William Magwood, “We’ve got to stop talking about Utopia; we’ve got to stop just talking about what our targets are and actually articulate our plan starting tomorrow … what are the building blocks to getting there.”

So, the time has come to talk less and do more to make sure nuclear can reach its full potential and set the world on a real path to net zero.

We are seeing exceptional innovation as vaccines for covid are being made available in time frames never before seen to address this pandemic.  This shows what we can do as a society when we all work together to a common goal.

I fear there's still a parallel here in the negative way-- there's a lot of skepticism and fear by the less informed about vaccines, which may downgrade the efficacy as a whole. SImilarly, less informed people may still fear nuclear energy-- so just like the tech is there, we still must wrestle with public acceptance.

Milton, what is your understanding of the term "net-zero"? When "net" is used in accounting, it means what's left over, as in "net profit" - what's left over after expenses are deducted from revenue.

The only way to "deduct" carbon emissions, however, is to sequester them - and not one technology has shown promise for sequestering emissions at the scale needed to have a measurable effect.

Why IEA doesn't simply call for zero CO2 emissions is worrisome. It seems "net" is being used as more of a fudge factor: "Okay, so we might be emitting some carbon, but we'll donate to good causes, or bake our neighbor some cookies." No?

The nuclear industry through the World Nuclear Association (WNA) has proposed its Harmony goal of 25% electricity generated from nuclear by 2050.  This means about 1,000 GW (1000 large reactors) of new nuclear by then, which would be equivalent on an energy delivered basis to the growth assumed for solar adding a large amount of always on, 24/7 energy to the system

To meet the Harmony goal, we will need to build 1000 GWe of new nuclear capacity by 2050. The average build rate required is:

How much nuclear is now under construction?  55GW

So the goal is 290 GW for the 2020s, but be might get 55-65GW instead.  Even worse, this does not take into account retiring nuclear. We could easily see 50GW of nuclear retire in the 2020s.  In other words, capacity will stay flat.

Don't be sad, Joe. IEA's view of nuclear's future isn't nearly as dark as the dystopia you're imagining:

"In 2017, the IEA introduced the 'Sustainable Development Scenario' (SDS), which 'portrays an energy future which emphasises co-benefits of the measures needed to simultaneously deliver energy access, clean air and climate goals.' In WEO 2020, the SDS projects nuclear capacity to increase to 599 GWe by 2040."

Smile! That's 599 GW of clean electricity that doesn't go away at night! 😄

Interesting Bob - I googled "IEA Sustainable Development Scenario" and this article from the World Nuclear News popped up from June 2020.

According to IEA data on nuclear power, in 2019, 5.5 GW of additional nuclear capacity were connected to the grid and 9.4 GW were permanently shut down, bringing global capacity to 443 GW.

Let's dig a little deeper and actually look at the recent IEA Report and its nuclear section:

Here's the chart from that section showing as you said nuclear could grow to 599GW by 2040. 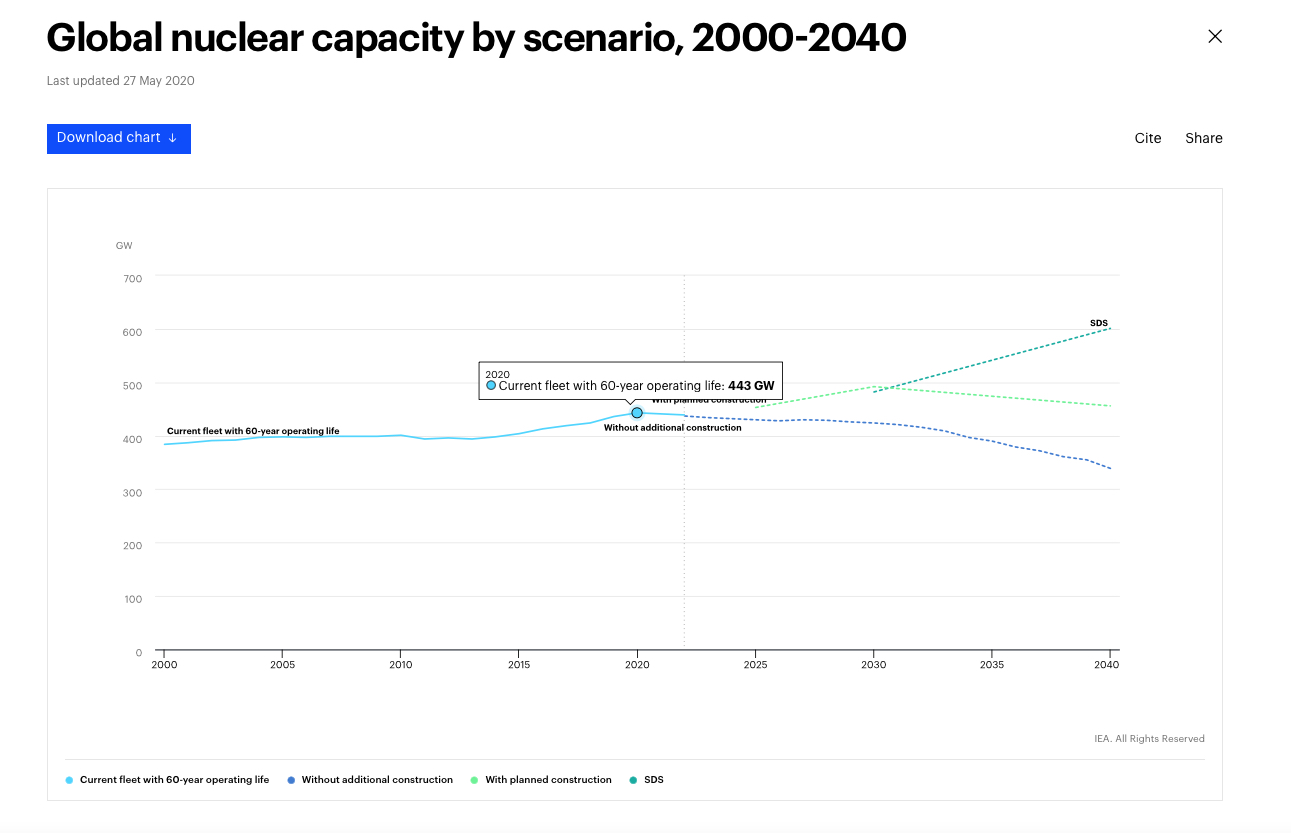 Note: with capacity at 443GW and WW generation at 2795 TWh in 2019 the Capacity factor for nuclear was 72%.  Effectively nuclear wasn't available for 7 hours/day.  Are you sure it doesn't go away at night?

In 2019, 5.5 GW of additional nuclear capacity were connected to the grid and 9.4 GW were permanently shut down, bringing global capacity to 443 GW. New projects were launched (about 5.2 GW), and refurbishments are under way in many countries to ensure the long-term operations of the existing fleet. Nevertheless, while the existing nuclear fleet remains the world’s second most important low-carbon source of electricity, new nuclear construction is not on track with the SDS. According to current trends, nuclear capacity in 2040 will amount to 455 GW – well below the SDS level of 601 GW. Additional lifetime extensions and a doubling of the annual rate of capacity additions are therefore required.

So this IEA report is saying that using current trends nuclear will go from its current 443GW to 455GW by 2040. In other words basically flat. Where have I heard that before?

Thanks for the reference Bob.

Milton - very good post, we should be more focused on carbon free electricity vs. renewables as the term "renewables" excludes legacy large scale hydro and nuclear, it may also exclude some forms of biomass.  All of these technologies have achieved a strong position in many countries generation profile and position those countries well for increase electrification of industry and transport and addition of additional renewable generation that may not be as responsive generation assets.  Countries like France (https://www.nei.org/resources/statistics/top-15-nuclear-generating-count...) could be 100% carbon free and maintain a cost competitive and responsive electrical grid.