Back in November, Somerset Operating Company, subsidiary of Riesling Power LLC, filed a request with the New York State Public Service Commission (NYSPSC) to waive the state’s required, 180 day notice to shut down the 674 MW Somerset Station coal-fired power plant, allowing the facility to be retired on February 15, 2020.

Somerset, better known as the Kintigh Generating Station, was named for longtime leader and former CEO and President of New York State Electric and Gas (NYSEG), Allen Ellis Kintigh.  He was instrumental in providing vision and leadership in the development of the project before he retired in the early 1990s.

When the unit began operating in 1984, it was hailed as one of the cleanest coal-burning power plants in the United States, having integrated the best emissions control technology of the time.

The Kintigh power plant is the last operating coal-fueled power plant in New York state.  The plant is located near Lake Ontario in Niagara County, about 40 miles north of Buffalo, NY.

Earlier this fall, the Cayuga coal-fueled power plant in Tompkins County, NY started the process of closure.  Cayuga was the second to last operating coal unit to shut down in the state. 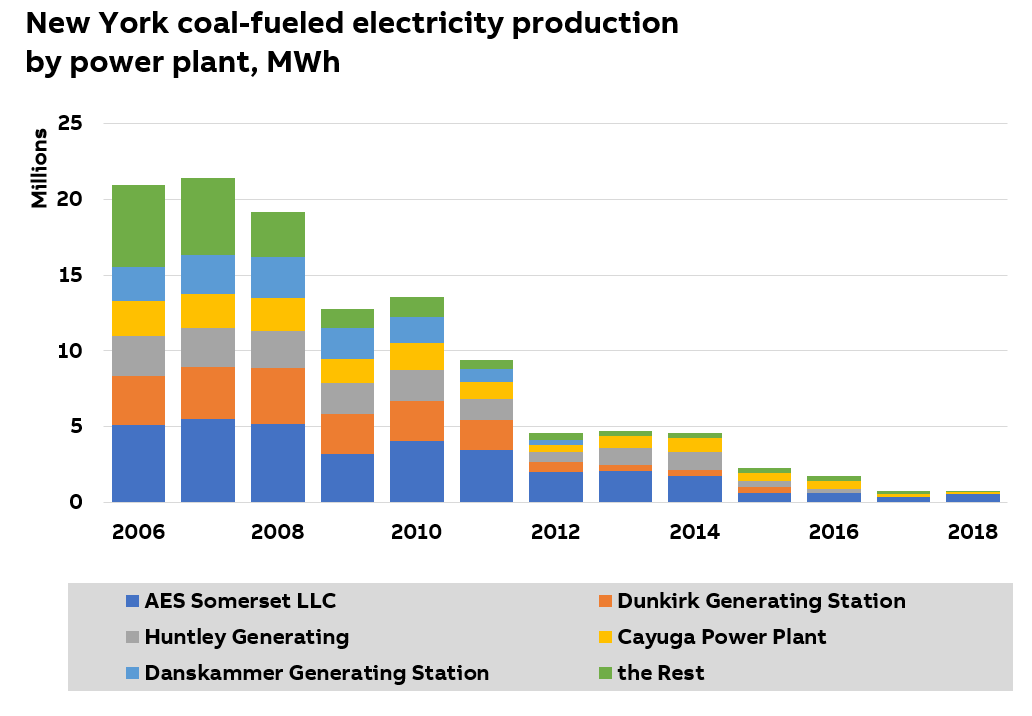 The proposed closure of Kintigh early next year is contingent on approvals by both NYSPSC and the New York Independent System Operator (NYISO), the state’s organized power market.  NYISO will determine if the plant closure will have an adverse effect on grid reliability going forward. 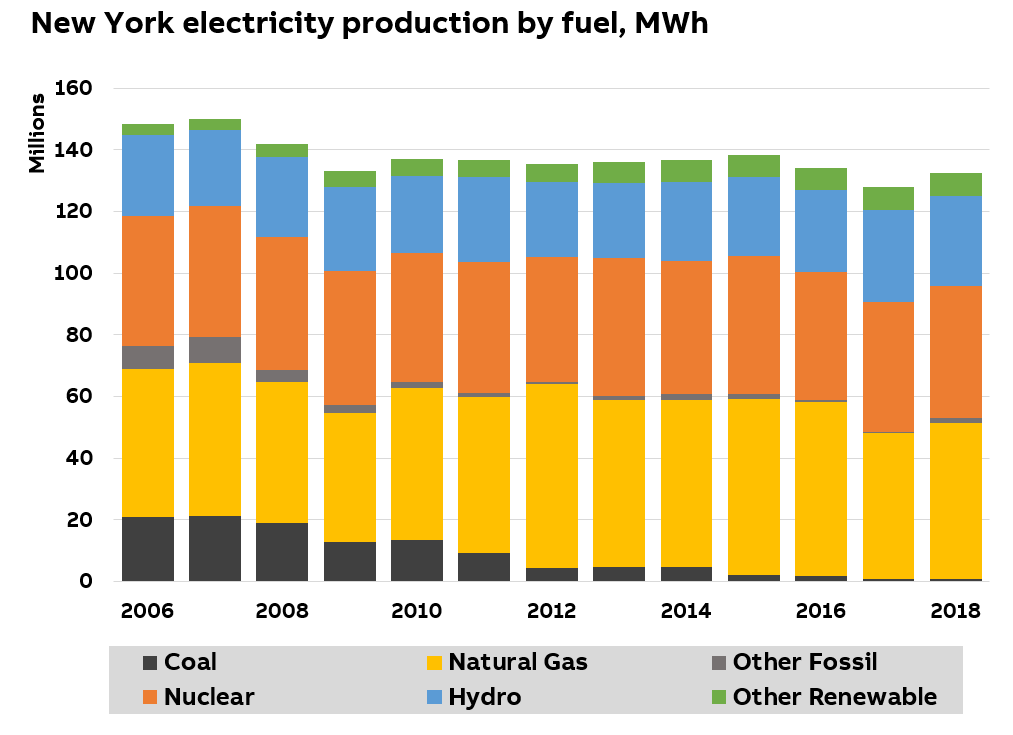 The plant closure announcement supports New York governor Andrew Cuomo’s recent proclamation to reduce greenhouse gas emissions across the state by 40% by 2030 and 80% by 2050.  As part of the plan, the state hopes to supply 100% carbon-free power by 2040.

The task of meeting zero-carbon power by 2040 will become more complicated when the two operating, zero-emission nuclear reactors (2.4 GW) at the Indian Point Energy Center scheduled shutdown over the next two years.  In 2018, Indian Point generated 12.3% (16.3 million MWh) of the state’s electricity production, more than two times the output produced by non-hydro renewable energy resources across the state.

Owned and operated by Entergy Corporation, the Indian Point nuclear power plant is located on the east bank of the Hudson River just south of Peekskill, in Buchanan, New York.

When the Kintigh coal plant stops generating electricity, it will be the end of an era.  New York will join the ranks of California and Idaho as the only states to have had operating coal-fueled power plants all shuttered over the years.

It looks like gas decreased from 16 to 17 and then jumped back up in 18, presumably from new plant(s)? Where will that figure continue to go? Will gas fill in for the lost power from coal or is nuclear/renewables poised to step in?

Matt, nuclear is stepping out. Next year one-fourth of Westchester County's (and NYC's) electricity, currently generated by Indian Point Nuclear Energy Center, will be replaced by natural gas, increasing New York's CO2 emissions by 8 million metric tons/yr. As in California, Governor Cuomo's office has been linked to bribes from Competitive Power Ventures, Inc., a gas generation builder, to shut down Indian Point.

Solar is a joke. With a capacity factor of 14%, it doesn't generate enough electricity to merit its own category (lumped together with "Other Renewables").

The loss of 16+ million MWh of nuclear power (Indian Point) during the next two years is the real issue. It will need to be replaced by increased imports of hydro-power from Canada -- which needs more transmission investment.  If not, natural gas will likely take up the slack until offshore wind can start contributing midway through the next decade.  Interesting times ahead for many states across the U.S.

It will need to be replaced by increased imports of hydro-power from Canada -- which needs more transmission investment.

I know that transmission investment comes with its own unique set of challenges, but beyond that-- there's of course a limit to how much excess hydropower is available from the neighbors to the north. Are we close to reaching that point?

Matt, the proposed Champlain Express is a 1,250 MW DC cable which, in theory, will be laid underneath the Hudson River to bring hydropower from Quebec to NYC. The cable would, also in theory, be capable of replacing half of Diablo Canyon's clean output.

Though Quebec has increased hydropower capacity by 6,000 MW since 2000, like all renewable sources hydro isn't dependable - it has a capacity factor of 65%, and would require natural gas backup during dry years.

That has Competitive Power Ventures (CPV) and Advanced Power (AP) foaming at the mouth. The CPV Valley Energy Center went online last year to pick up some slack and emit CO2 (I guess planners thought emissions were a little low).

How can these two fossil fuel hogs ever be economical with all that hydropower coming from Canada?

Sierra Club has apparently figured out laying electrical transmission under the Hudson River will disrupt local ecosystems more than Indian Point ever has.

"'We believe that [the Champlain Express] is a very bad thing,' said Shay O’Reilly, the Sierra Club’s New York City organizing representatives. His group believes that renewable energy sources should be developed locally rather than being imported from more than 300 miles away."

Translation from renewable baby-talk: environmental concerns and cost will doom the Champlain Express (failure was built into the project's design); CPV and AP will replace Indian Point with gas, and an imaginary offshore wind project will be scheduled for 20XX to relieve New York of its dependence on fossil fuel.

And the world gets warmer.