Everything is NOT fine in Fukushima.

CNN recently ran a story about the path of the Olympic torch through parts of Fukushima.   It noted that

“just about a  block away (from the Olympic torch route)…buildings and homes remain abandoned, decayed and in ruins, the result of the ongoing fears of radiation”.

The video goes on to discuss the results of ongoing measurements of radioactivity by local residents.  About halfway through the video:

“My dosimeter measures 2 to 3 microsiverts per hour. Point zero five  (0.05 level) is the level before the nuclear accident.”

The video raised two questions for me:

1.  Are the measurements taken in this video realistic?

2.  Are they a significant risk to the residents?

There have been several radiation monitoring studies completed for the area around Fukushima since the Fukushima meltdown as a result of the earthquake and tsunami on March 11, 2011. Here are some results:

This paper and presentation by authors from Lawrence Berkeley National Laboratory and the Japan Atomic Energy Agency reports:

"... with data from 2016  and earlier ... concludes that the predictive  modeling results showed that by 2026, the air dose rates would continue to decrease, and the area above 3.8μSv/h would be almost fully contained within the non-residential forested zone."

Note the red areas on the maps: 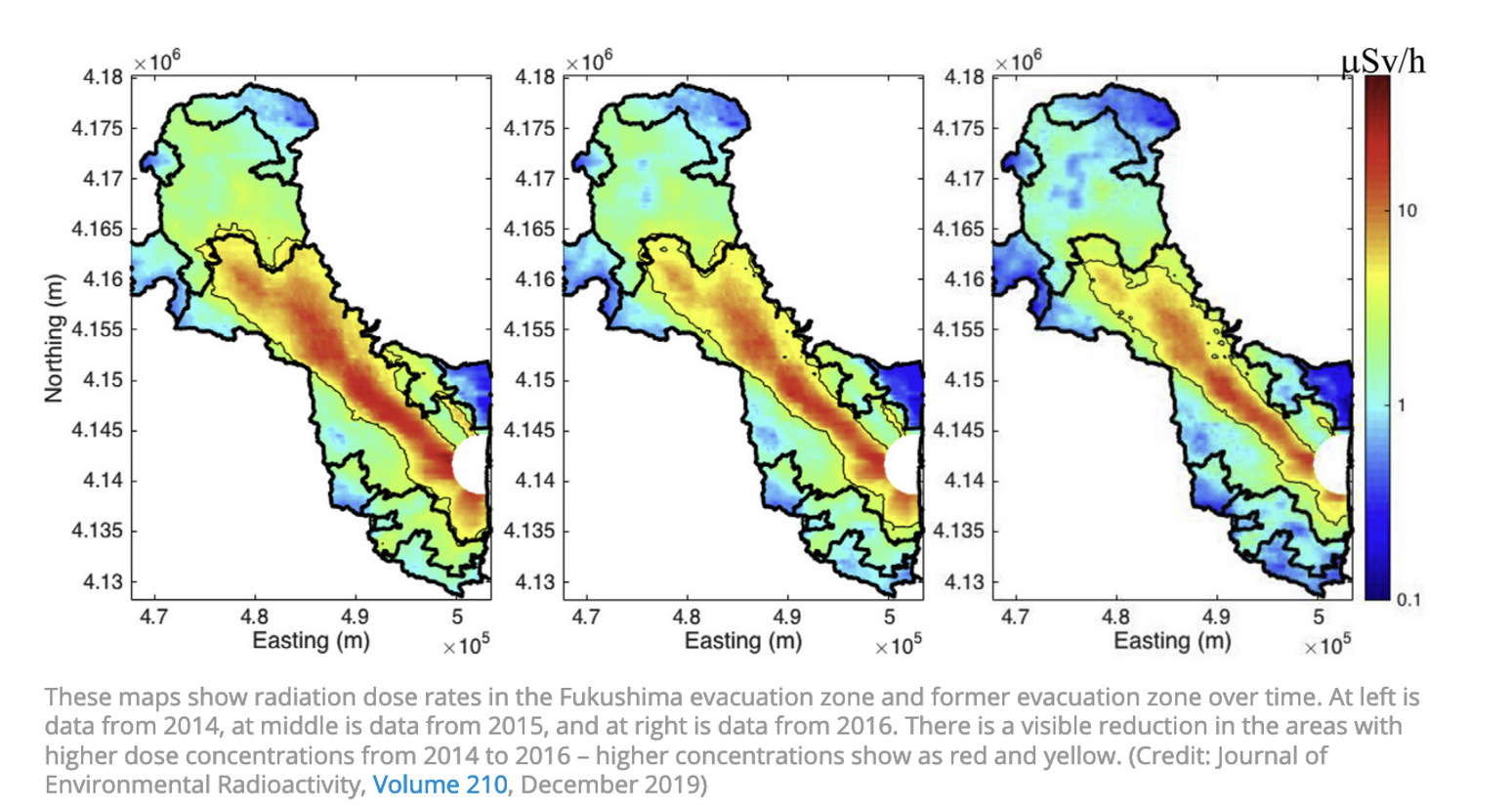 In other words, until at least 2026 residents will be exposed to at a minimum 3.8 microsiverts per hour. Until then, residents´ exposure, if they are outside 8 hours per day, would be over 11 millisiverts per year.  That may not be such a big deal, at least if no one lives in the "non-residential forested zone." Maybe the risk is not so very much elevated?

Another study, this one by Greenpeace (I know many will not believe Greenpeace. I have my doubts too.) discusses Japanese government policy regarding radiation exposure:

«...the current government’s long-term target levels of 0.23 microsieverts per hour (μSv/h). It is this target level that the government uses for its calculation to reach an estimated annual exposure level of 1 mSv/y. The government calculation is based on citizens spending an average of 8 hours per day outside and takes into account shielding from radiation while inside a wooden house. ...In the case of radiation levels in the highly contaminated exclusion zone of Namie the situation is even more severe. It will be at least many decades for some areas, and well into next century for others, before radiation levels start to even approach government targets of 0.23 μSv/h.The Japanese government continues to disregard scientific evidence of cancer and other health risks from low-dose radiation exposure, including in the range of 1-5 mSv/y».

«In the Obori hamlet, along a road and path where workers were operating on 23 October 2018, radiation hot spots were measured at 12 μSv/h at 1 meter, 19 μSv/h at 0.5 meters, and 64.9 at 0.1 meters. To put these figures into context, at this one location radiation readings at one meter were 300 times higher than the background level of 0.04 μSv/h in the prefecture before the March 2011 Fukushima Daiichi nuclear accident.»

The point here is that by the Japanese government´s criteria for exposure of 0.23 microsiverts per hour, people are greatly overexposed with the government´s approval.

So, what does this mean? This article explains:

The crucial measurements for people with long term exposure are per hour, as opposed to a single dose from a dental x-ray or plane trip.

"* Japan’s Chief Cabinet Secretary Yukio Edano: … radiation levels near the stricken plant on the northeast coast reached as high as 400 millisieverts (mSv) an hour. That figure would be would be 20 times the annual exposure for some nuclear-industry employees and uranium miners.

* People are exposed to natural radiation of 2-3 milliSv a year.

* Exposure to 100 mSv a year is the lowest level at which any increase in cancer risk is clearly evident. A cumulative 1,000 mSv (1 sievert) would probably cause a fatal cancer many years later in five out of every 100 persons exposed to it.

* There is documented evidence associating an accumulated dose of 90 mSv from two or three CT scans with an increased risk of cancer. The evidence is reasonably convincing for adults and very convincing for children."

But the people in Fukushima are exposed to these levels every day, for years. And yes, the doses are cumulative. And the figures appear to be conservative. Still, though, the numbers do not appear to be inordinately very high.

However, there are more data here.

"On April 6, the radiation level in the city of Fukushima was 13.9 μSv/h.  If we multiply that number by the number of hours in a year, the yearly radiation dose is about 122,000 μSv.  This number is more concerning.  Remember, the U.S. does not allow workers to receive more than 50,000 μSv per year at work."

In order to reach 100 millisiverts in a year, with an exposure for 8 hours per day, would require about 34 microsiverts per hour.  So, it looks as though the data is still generally lower than would be necessary to reach the level  "at which any increase in cancer risk is clearly evident."

But, it is well documented that children are much more sensitive to radiation. Therefore, consider this study.  This paper includes data through March, 2017.  The authors compared dose rates and thyroid rates in areas near to and distant from Fukushima.

"We found a positive correlation between the thyroid cancer cases reported in the FSS and the air-dose rates...”

"We do know that several Fukushima staff members and firefighters have been exposed to dangerous levels of radiation. At least six staffers were exposed to radiation levels greater than 100,000 μSv.  At least 50 firefighters received doses of 27,000 μSv."

This study divided the data into two parts:  the preliminary baseline survey (PBLS) and the full-scale survey (FSS). The PBLS is essential because, at the time of the accident, there was no epidemiological data in Japan using ultrasonography. Studies have suggested that the minimum latency period for radiation-induced thyroid cancer is 3-5 years. 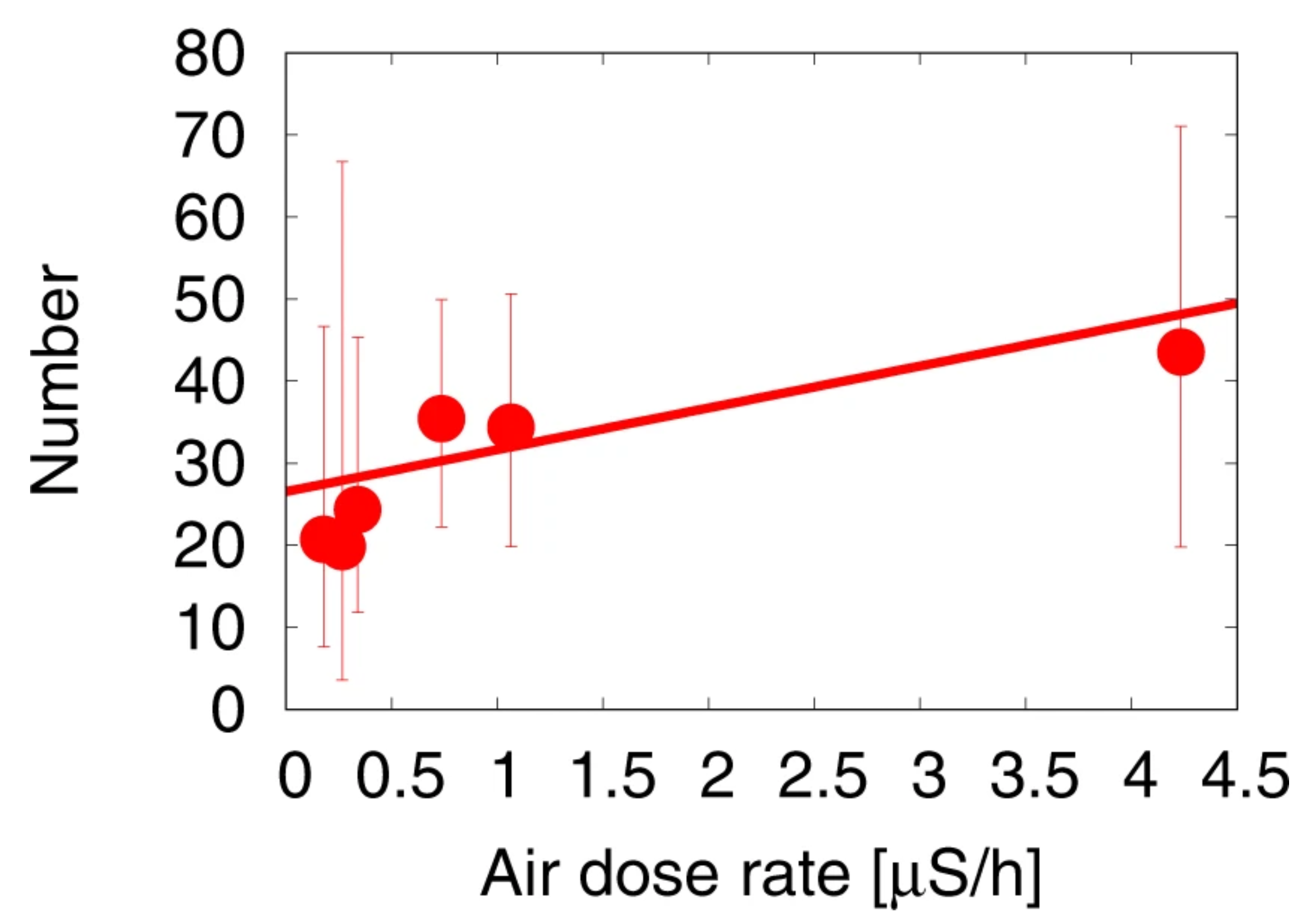 Of course, one should contrast these results with reports from the World Nuclear Association (WNA) who report:

“No harmful health effects were found in 195,345 residents living in the vicinity of the plant who were screened by the end of May 2011. All the 1,080 children tested for thyroid gland exposure showed results within safe limits…”

And in this report

"There have been no harmful effects from radiation on local people, nor any doses approaching harmful levels."

But the WNA had no problem reaching this conclusion in 2021:

"The premature deaths were mainly related to: physical and mental illness brought about by having to reside in shelters and the trauma of being forced to move from homes;"

Clearly, the World Nuclear Association did not do much homework before they proclaimed that there was no radiation problem in Fukushima soon after the disaster.  They may want to consult an epidemiologist.  And what were their sources for these profound conclusions? Please have a look, and at this. Not very helpful.

The data from the following report are quite a bit more indicative of increased cancer risk for the people, especially children, living in close proximity to Fukushima.

This report includes these data: 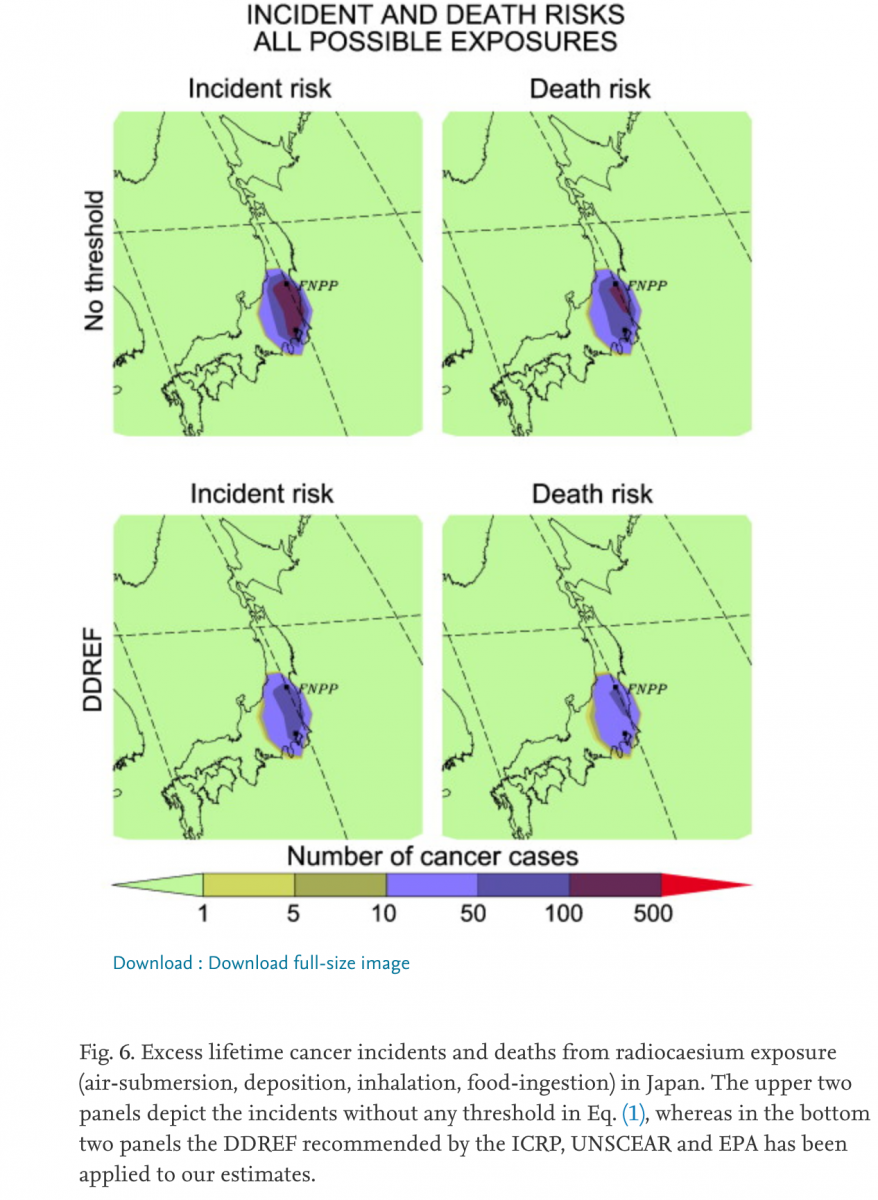 Note: For those of you who do not accept the "LNT" hypothesis for risk calculations,  believing that there must be a threshold dose below which no visible effects can be observed, the authors include alternative estimations for the excess lifetime risk calculations applying the DDREF. (Dose and Dose Rate Effectiveness Factor).

And now it is fully acknowledged, but only after 7 years, that at least one person died from acute radiation exposure at Fukushima:

"Radiation risks from Fukushima were more enhanced near the plant, while the evacuation measures were crucial for its reduction. According to our estimations, 730–1700 excess cancer incidents are expected of which around 65% may be fatal, which are very close to what has been already published."

It is also increasingly clear that far more than the one person has died or will die as a result of radiation exposure at Fukushima.  Unfortunately, they were most likely to be children, as they are the most vulnerable.

"Children are at a greater risk than adults of developing cancer after being exposed to ionizing radiation. Because of their developing bodies and long life expectancy post-exposure, children require specific attention in the aftermath of nuclear accidents and when radiation is used for diagnosis or treatment purposes."

A recent study  did indeed find an increase in thyroid cancer among children and adolescents just four years after the event.

"An excess of thyroid cancer has been detected by ultrasound among children and adolescents in Fukushima Prefecture within 4 years of the release..."

Assessment of the risk and result of a given dose of radiation is somewhat complex.  It is especially so when the estimations of the actual doses vary.   And it is difficult to point at any single case of cancer from which one can draw the firm conclusion that it was caused by chronic or acute exposure to radiation from the Fukushima nuclear plant meltdown.  But, the nuclear industry saw what it wanted to see, and disregarded the rest.  The families and the communities know better: The epidemiological data prove the cause and effect relationship between repeated and chronic exposure to radiation following the Fukushima meltdown and cancer, especially childhood cancer.  If the worst contaminated areas had not been promptly evacuated, there would undoubtedly have been far more casualties. Unfortunately, it appears that high levels of radiation reached a radius of 60 km. or more from the reactors.

There are inescapable conclusions from the sum of the research: Yes, Chernobyl was much worse than Fukushima. And many more died directly as a result of the earthquake and tsunami at Fukushima than from the nuclear plant disaster.  But, the number of deaths due to radiation at Fukushima is in the hundreds, at least. And more are likely to be reported in the coming years.

It is time to put a stop to the lie that everything is fine in Fukushima.