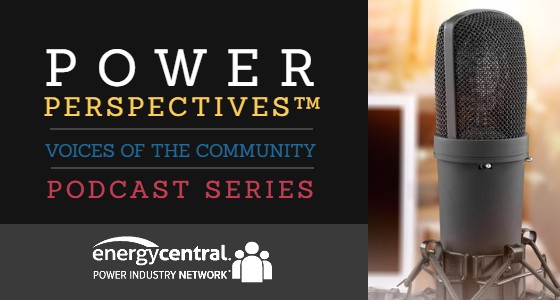 Energy Central is thrilled to announce that we’re finally getting into the podcast arena with our inaugural podcast series “Energy Central Power Perspectives™ Podcast.” With this first podcast series, we’re hoping to take some of the best and most engaging content already submitted to the Energy Central community and bring it to life with lively conversations that allow us to dig in deeper and really get to the heart of the issues that matter to utilities, the spirited energy debates, and the topics that will shape the sector moving forward.

To preview what you can expect from this podcast, we'll be looking for the authors of the most insightful articles and the members with most impactful voices within the Energy Central community and we'll invite them to discuss further so we can dive even deeper into these compelling topics. Each week we’ll connect with a new contributing member of the Energy Central community who submitted a piece of thought-provoking content or started a discussion that really resonated with our members and invite them to expand on their perspective and tell the deeper story in their own words via lively and purpose-driven dialogue about the state of energy today and tomorrow. So, for anyone posting in the community, be prepared because you may be the next one asked to join the podcast stage to discuss your work, your ideas, and your perspective!

The Energy Central Power Perspectives™  Podcast is hosted by Jason Price, Community Ambassador of Energy Central. Jason is a recent NYSERDA scholar and NYU Clean Tech diploma recipient, having worked extensively in a multi-owner, utility-scale microgrid business model. Jason is joined in the podcast booth by the producer of the podcast, Matt Chester, who is also the Community Manager of Energy Central and energy analyst/independent consultant in energy policy, markets, and technology.

Diving into our first episode, we gladly welcome esteemed community member and Energy Central expert Dan Yurman. For any of you who have spent time around the Energy Central platform, you’re likely already familiar with Dan’s prolific work in the community. He’s a nuclear energy guru, with a career that’s spanned multiple continents over the course of 40 years, with stops at Idaho National Lab, Bechtel, Rockwell Automation, and NASA. Today, Dan actively shares his insights on nuclear power and the wider energy sector through his posts on EnergyCentral.com, his blog Nuetron Bytes, and his Twitter feed @djysrv.

While any number of Dan’s content would be worth discussing, we pulled him into this episode thanks to his annual posting of “Dan’s Idaho Nuclear Chili Recipe.” As we’re nestled into two of the biggest food-related holidays of the year, Dan’s chili recipe had us drooling and its connection to the nuclear industry was both fascinating and gave us a fun segue to discuss the state of nuclear power across several different nations and the role nuclear energy will play in a constantly evolving grid.

Listen to hear the full story and Dan’s perspective on the role nuclear plays today in different areas across the globe and how that role will change moving forward.

If you want to be a guest on a future episode of the Energy Central Power Perspectives™ Podcast, let us know! We’ll be pulling guests from our community members who submit engaging content that gets our community talking, and perhaps that next guest will be you! Likewise, if you see an article submitted by a fellow Energy Central community member that you’d like to see broken down in more detail in a conversation, feel free to send us a note to nominate them.

Lastly, this official Energy Central podcast represents our dive into the podcast format as we’ve noticed an increasing number of our community members submitting their own podcasts to the site and readers seeking out these great new ways to consume relevant utility content. If you want to submit your podcast to Energy Central and maybe even get featured in a future special newsletter on the best podcasts in the Energy Central community, get started by using the "Add a Resource: Podcast / Audio" option.

Happy listening, and stay tuned for episode #2 next week! Like what you hear, have a suggestion for future episodes, or a question for our guest? Leave a note in the comments below.

All new episodes of the Energy Central Power Perspectives™  Podcast will be posted to the relevant Energy Central community group, but you can also subscribe to the podcast at all the major podcast outlets, including:

Twin HTR-PM reactors will drive a single 210 MWe turbine in China’s high-temperature pebble bed reactor. This new reactor could eventually be mostly factory mass-produced. The higher temperature will make it about 45% thermal efficiency...

As of now, 1,477 nuclear fuel element rod bundles have been produced, and nearly 13% of the annual objective has been completed.