Louis M. Michaud has 44 years of experience in the process and power industry, He was a leading process control engineer for a major petrochemical company for the last 24 years of his career. The...

Hurricanes are powered by the heat content of warm sea water. Raising surface air that has been sprayed with warm sea water can produce mechanical energy. The specific work, the mechanical energy produced per unit mass of air raised, can be calculated with engineering process simulators or with scientific calculators. Atmospheric models are not the only method of discovery. 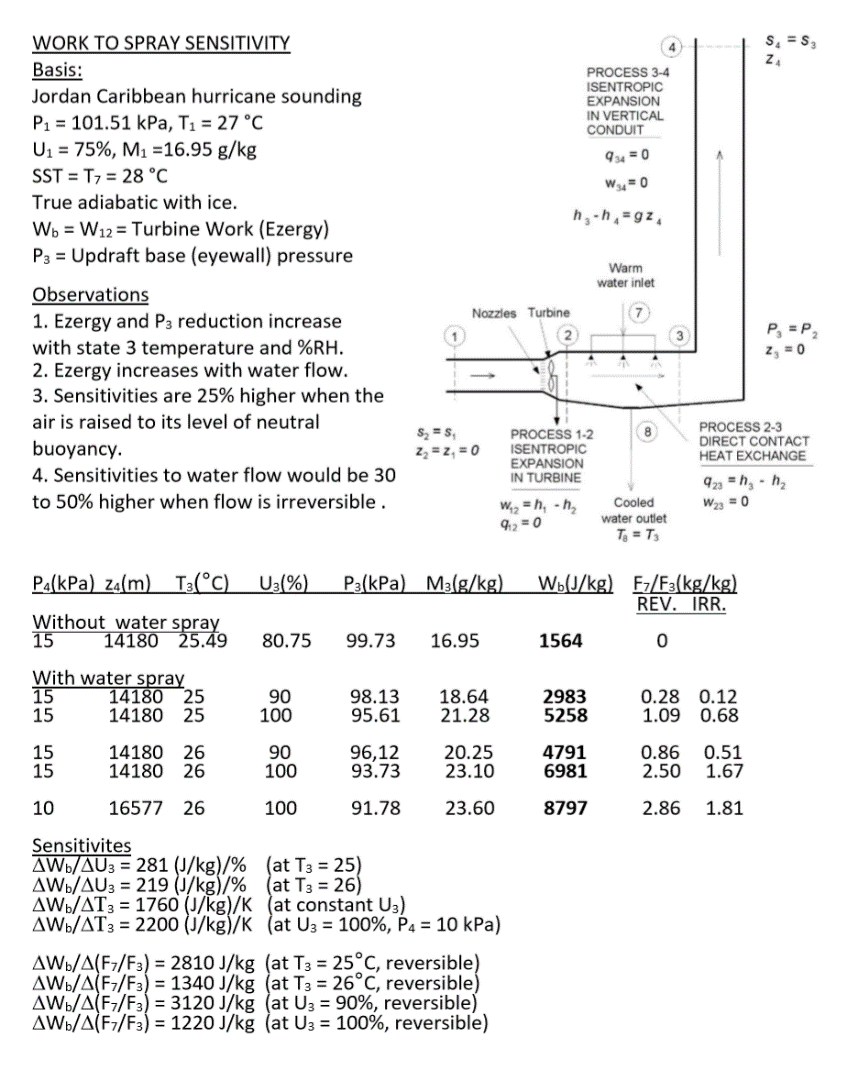 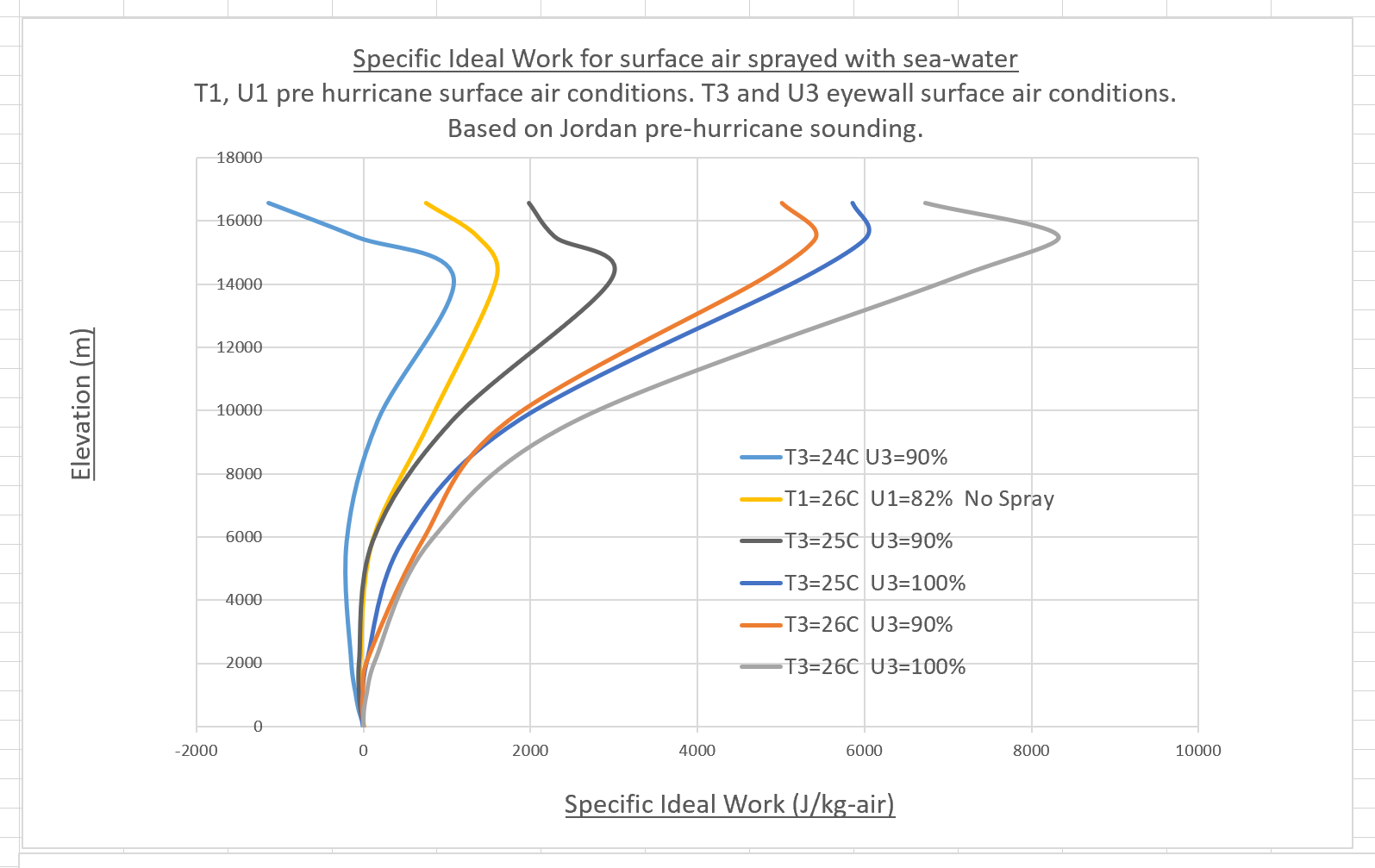 Upward flow in a vortex is roughly proportional to the square of diameter. A 30 m diameter waterspout could have an upward flow of 10,000 kg/s (10 t/s) corresponding to a power of 50 MW, at a specific work of 5,000 J/kg. A 300 m diameter tornado and a 3 km diameter hurricane could have an upward flow of 1000 t/s and 100,000 t/s corresponding to powers 5 GW and 500 GW respectively.
The world current electrical power production of 3 TW could be provided by 6000 500 MW atmospheric vortex engines. The engine and the vortex could have base diameters of 300 m and 100 m respectively. The stations could be a few hundred kilometers apart. The well controlled vortices at the center of the stations would not be a hazard.

In a vortex, the work of expansion is transferred downward like in a solar chimney. Centrifugal force acts like a physical tube, it prevents high pressure ambient air from being drawn in the rising air and transmits the mechanical energy to grade. 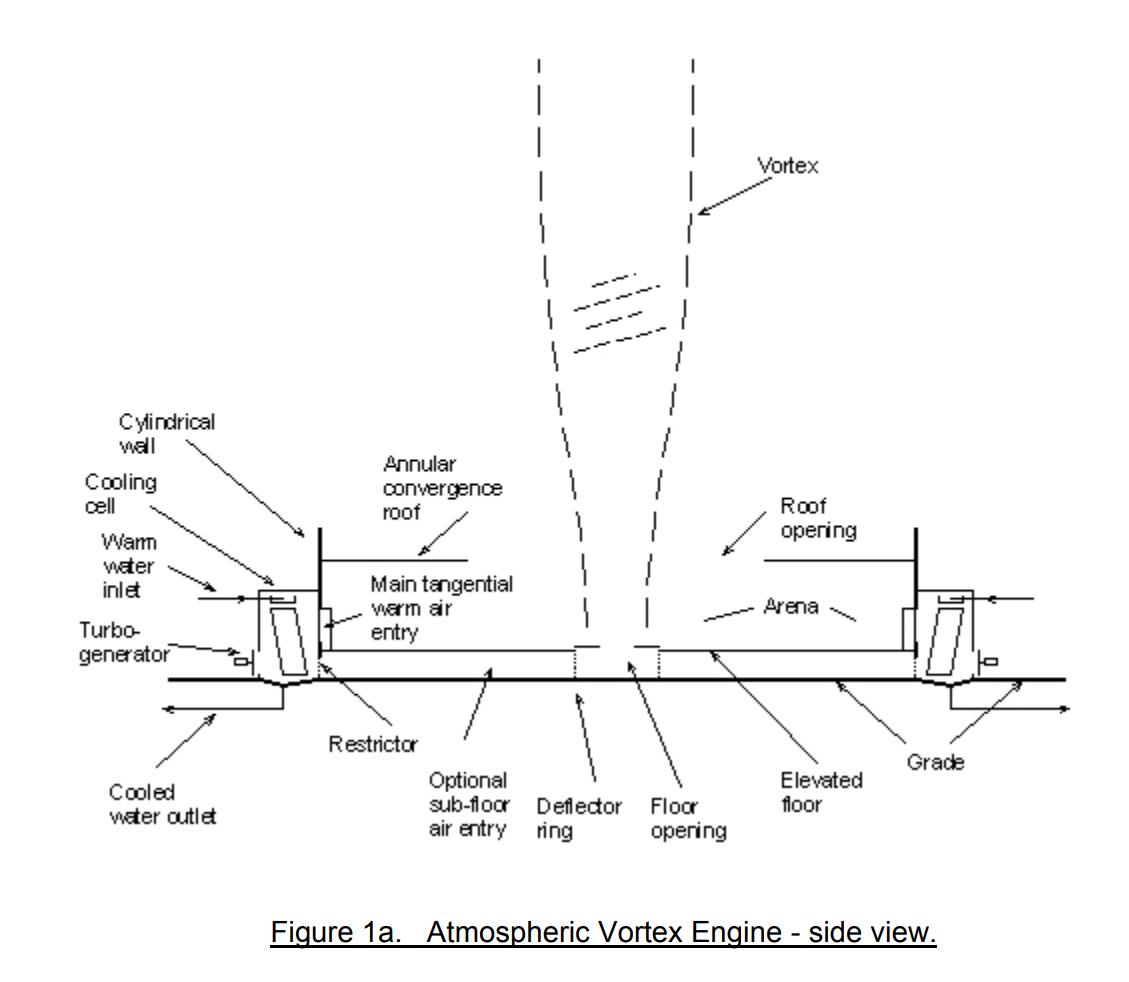 That is a tall order to try and captuer even a small part of a storms energy. In fact there must be a lot of damage to wind turbines and solar arrays with the very high winds. Add in the energy of lightning and you really have the tiger by the tail. More like a monster dragon by the tail. Go for it.

Yes, producing a controlled tornado is a tall order. That is why developing a process for doing so will require participation from the power industry. The energy comes from the preceding air that has risen well beyond its condensation level; it does not simply descend from above. We must go for it, together we can do it.

Here are videos of small prototypes.

It is one thing to bottle a tornado-like vortex to harvest for energy but a hurricane. I wrote about this idea ten years ago when Louis Michaud whose company, Avotec, was building an Atmospheric Vortex Engine. On the scale he was advocating for back then the vortex would have been contained in a structure no bigger than 200 metres in diameter, and 80 metres in height. The vortex within it would have taken up about half the space and reached a height of up to 20 kilometres.  As big as that sounds it's a pipsqueak when compared to attempting to harness the wind energy of hurricanes.

The title "Hurricane Energy" referred to capturing the energy source responsible for hurricanes and not to producing hurricane size vortices.

Read the whole post; it states that I am talking about producing about the same size as in my proposal of 10 years ago.

The post says:
"The world current electrical power production of 3 TW could be provided by 6000 500 MW atmospheric vortex engines. The engine and the vortex could have base diameters of 300 m and 100 m respectively. The stations could be a few hundred kilometers apart. The well controlled vortices at the center of the stations would not be a hazard."

The base diameter could not be more than half of the 300 m diameter vortex engine. Controlled vortices about 100 m in diameter could improve weather by distributing rain where needed.

I'm not scaling up from tornado to hurricane. Yes, a 100 m diameter tornado is a pipsqueak compared to a hurricane.

Interesting thoughts here.  I think the issue would be that these storms only occur every once in a while - does it even make sense to harness this - unless we can find ways for longer-term storage?

Michaud's original idea of artificial vortices could work. I don't know how the general population would look at a tornado as a power supply. I'm sure science fiction writers would have a say in predicting future disasters when a utility accidentally unleashes an artificial vortex or through the creation of one spawns natural companions. Michaud's vortex engines have fairly large footprints at 300 metres in diameter.

A vortex engine would not capture the energy natural storms. It would produce its own vortex from heat stored naturally in warm humid surface air, in warm sea water, or from thermal power plants waste heat. Surface air can be in a metastable state wherein it is denser than the immediately overlying air and can become less dense than the air at elevations of 3 to 12 km when raised. A starting heat source is required to overcome this metastable state. The starting heat source could be a steam sprayed in surface air raising its temperature to around 40°C. The sustaining heat could be 30°C waste heat or 28°C sea water. Waste heat could be sprayed in the air like in a wet cooling tower. A vortex acts like a tall chimney and transfers the work of buoyancy produced at high elevation to turbines located at grade.

There is no need for energy storage, the heat required to sustain the vortex and to produce the electrical energy is already stored at the bottom of the atmosphere and in warm seas. Fire whirls are common. Tornadoes and waterspouts are triggered by natural disturbances; suitable atmospheric conditions and are widespread. The vortex engine would provide the starting disturbance and control the rotation.

Thank you for your comment. Please have a look at my previous "Atmospheric Engine" post and to the associated links for additional information.