It´s ten years today since the earthquake, tsunami and meltdown of the nuclear power plant at Fukushima.  It´s worth having a look at this and related articles to remind us of what happened.

Even now — a decade after those deadly natural disasters on March 11, 2011, set off a catastrophic nuclear meltdown — the Japanese government has not fully reopened villages and towns within the original 12-mile evacuation zone around the Fukushima Daiichi nuclear plant. And even if it did, many former residents have no plans to return.

Within Japan, the disaster’s legacy still feels painfully immediate. A government proposal to release about one million tons of contaminated water into the sea has riled local fishermen, and cases against the government and the plant operator are winding through the country’s highest courts. The issue of nuclear power remains highly fraught.

And for miles around the plant, there are physical reminders of an accident that forced the exodus of about 164,000 people.

While background levels of radiation have fallen across the prefecture and scientists have deemed short-term risks minimal, they are divided about the long-term consequences for public health.

“We know relatively little about the long-term effects of exposure” to low doses of radiation, said Timothy Mousseau, a biologist at the University of South Carolina who has studied how radioactive contamination has affected animals and plants in Chernobyl and Fukushima.

A third article describes the distrust of the nuclear industry and the government with respect to nuclear waste.

The Japanese government was conducting a study of potential locations for storing spent nuclear fuel — a review of old geological maps and research papers about local plate tectonics. It put out a call for localities to volunteer. Participating would commit them to nothing.

Haruo Kataoka, the mayor of an ailing fishing town on the northern island of Hokkaido, put up his hand. His town, Suttsu, could use the money. What could go wrong?

The answer, he quickly learned, was a lot.

On top of a newly galvanized anxiety came a fresh mistrust of both the nuclear industry, which had built reactors susceptible to being overwhelmed in a natural disaster, and the government, which had allowed it to happen.

A parliamentary commission found that the meltdowns had been the result of a lack of oversight and of collusion between the government, the plant’s owner and regulators.

It is so difficult to maintain an appropriate level of anxiety regarding the risks of nuclear energy and the possible results of it going wrong.  But it would be wrong to ignore the experience of the people of Fukushima.

Not much of a "catastrophic meltdown" without any casualties, is it? Despite all of NYTimes's spooky photos/clickbait.

For a more balanced perspective, here's a photo of Fukushima City, a bustling metropolis of 238,000, and capital of the prefecture: 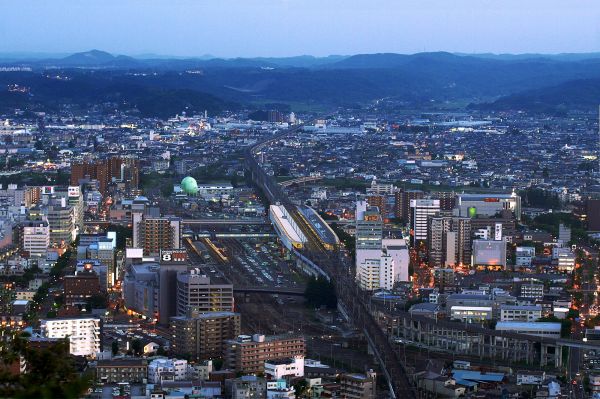 It was taken not in 1998, or 2010, but in May, 2011 - three months after the scary, dark, radioactive, frightening, cataclysmic, scary, catatstrophic disaster at Fukushima-Daiichi (did I mention it was scary?).

"It is so difficult to maintain an appropriate level of anxiety regarding the risks of nuclear energy and the possible results of it going wrong."

A good sign. As you learn more about nuclear energy you'll be less and less afraid of it.

Interesting post, Jim. From what I've read recently, while the Fukushima Daiichi disaster has slashed nuclear's share of Japan's electricity mix, the country hasn't entirely given up on nuclear.

The Ministry of Economy released a report last year that detailed a pathway to decarbonizing the economy by "Maximizing utilization of existing nuclear infrastructure, while aiming to decrease dependency on nuclear power." Japan still has nine operational nuclear plants and is considering them as a source for baseload power. Here's an interesting article about the problems with phasing out nuclear power in Japan: