The role of nuclear power in supporting global decarbonization was discussed more at this COP than at any previous one.  We have seen articles with headlines like “Nuclear Was the Quiet Hero of COP26” talking about the gains made in getting people to listen to the arguments in support of nuclear power.  World Nuclear Association Director General Sama Bilbao y León was in attendance and noted, “There has been a change in how nuclear is perceived at this COP.”

While there were many hard-working people who deserve thanks for their efforts in advancing the discussion on the merits of nuclear power, it is the energy and commitment of the nuclear young generation that really stood out.

Their efforts to advocate for nuclear power and influence world leaders and policy makers were well received.  Their message was heard in numerous talks and panel sessions right across the conference.

What was amazing is the way in which these young people engaged.  There were no old men in white lab coats giving monotonous lectures on the how nuclear power works.  Rather there were symbols like Melty the polar bear and Bella the 3 metres tall inflatable gummy bear who represents the amount of uranium that could power all of Glasgow’s electricity for 16 months.

Their voices were heard.  And they made a difference.  They even organized a flash mob to get attention to their slogan for the event – Net Zero needs nuclear.  Antinuclear activists and aligned politicians have called this video cringe worthy.  Yet in their criticism they also widely shared the video giving it even more attention.

As stated in one of the articles coming out of COP26, “Nuclear is losing its stigma, in other words, it’s been invited to the cool kids’ table.”  And these cool kids are smart passionate young people who are well on their way to being the future leaders of a strong global industry that is playing a major role in solving climate change.  From those of us that are not as young as we once were, but remain passionate about nuclear power, and are still young at heart – thank you.  The future is in good hands.

While nuclear power may be recovering from its post Fukishima stigma, it is falling further and further behind economically. There is no evidence other than optimistic claims from promoters that small modular reactors will produce power noticeably cheaper than large plants. They might have an application is some Northern regions where solar and wind are limited, local power demands are very high and there is a use for low grade heat in district heating systems. But in any case have shown little prospect of power at less than US$80-90/MWh. To achieve even those costs they will have to run at very high capacity factors. In most parts of the world that will mean they will need both seasonal and diurnal storage to cope with variations in demand.  If the storage is built, in most situations it will be more economical to recharge it with a combination of wind/solar/waste to energy and/or more active regulation of hydro than nuclear power.

Germany today achieves about 700 MWh/square km/y from renewables. If it replaced its roughly 200 million pre 2015 solar panels with latest technology as the panels reach 20-25 years old and added another 150 million over the next 10 years by 2030 it would generate about 3-4 times as much solar as it does now. Similarly if it replaces its 25,000 oldest wind turbines with 15,000 modern 5 MW class turbines it would more than double onshore wind to around 200 TWh/y. That would bring total onshore renewable generation to just under 400 TWh or 1,150 MWh/square km. its planned 40GW of offshore wind will add another 140 TWh. In total this enough to replace all current electricity use and about half land transport. Ongoing energy efficiency gains on the one hand and the reduction in energy use for the production and distribution of fossil fuels will probably see Germany provide at least 60% of its total energy use from renewables by 2032.

The US with far better wind, solar, geothermal and hydro resources, could achieve at least 1,800 MWh/square km by 2035. This would be around 4.5 times current electricity use or more than enough energy to displace 100% of current electricity generation, 80% of land transport and at least half of domestic and commercial heating. Even if SMRs were successfully deployed by then it is unlikely that there would be enough of them to replace lost capacity at closing large scale nuclear plants. As wind and solar cost about 1/3rd of nuclear power it is unlikely that preference will be given to nuclear by generating utilities.

In summary, it is highly unlikely that nuclear power will ever achieve much more than its existing share of world energy supply even in a fully electrified economy

Renewables are only lower cost when they're available, when renewables are not available Germany is burning coal.
Germany’s Energiewende approach of prioritizing renewables and closing non-emitting nuclear energy plants early has resulted in coal being Germany's primary electricity source in the first half of 2021. To meet their electricity needs Germany has been building more coal power and Germany still plans to shut down half of its nuclear fleet at the end of this month and the rest in 2022. In comparison, France's approach of using renewables partnered with nuclear energy has resulted in France's highest emitting day of electricity production still being cleaner than the best day of Germany.

During the launch of Bruce Power Net Zero Inc. on October 21, James Scongack shared "One of the single most significant climate change reduction initiatives in the world that has been achieved since the year 2000 was the phase-out of coal in Ontario, and the phase-out of coal fired electricity in Ontario was only possible through nuclear power."
Watching environmental advocates celebrate the closure of non-emitting nuclear energy in favor of fossil fuels is disheartening. It is a crime against future generations to close non-emitting power sources early and replace them with fossil fuels.  I do not understand environmental advocates who advocate against using nuclear energy. Canada will need to double the amount of clean electricity it produces to fulfil the government’s goal to reduce greenhouse gas emissions to “net zero” before 2050. It will take an all non-emitting sources approach that includes wind, solar, energy storage, hydro, tidal, offshore wind, wave, river, geothermal, and nuclear power generation if we are going to avert the catastrophe of climate change.
As I write this post Germany is emitting 300 gCO₂eq/kW. 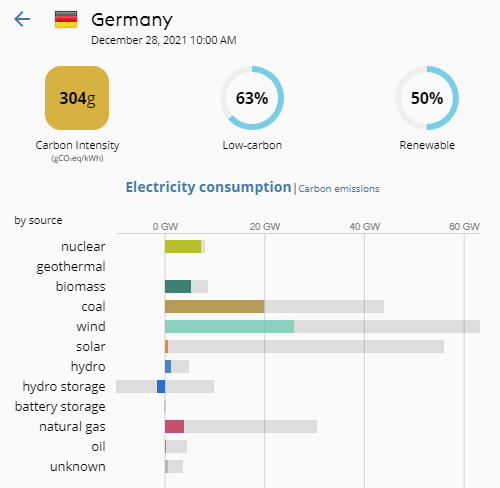 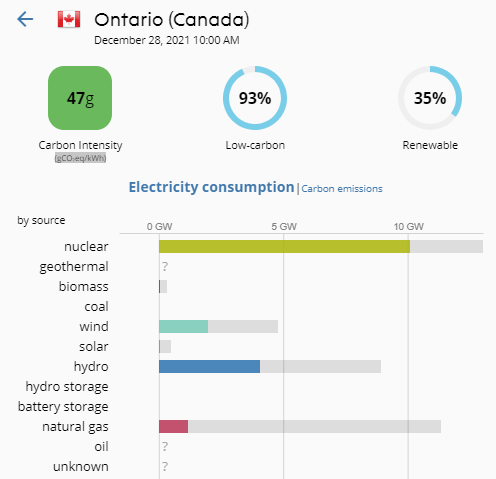 The global lowest emitters consistently rely on hydro and nuclear to support renewable energy.  The choice is not between renewable and nuclear power, it is between severe climate change and decarbonized energy systems.

Frankly, every country has the right to decarbonize as it sees fit.  For those who think it can all be done with renewables alone, just do it.......don't shut down existing nuclear now - wait until renewables can replace it.  Shutting down nuclear first and replacing it with fossil fuels seems to be disproving the case for 100% renewables rather than supporting it.

And as for the economics, no one is advocating to build non competitive projects.  Accepting nuclear is non emitting is what brings it to the table.  Again, then it is up to each utility to decide on any given project. Oh, and don't forget system costs.  A 2018 MIT study clearly showed that to fully decarbonize a system, a solution that includes nuclear is lower total cost than one that it based solely on intermittent renewables and storage.

Milton I absolutely agree with you re maintaining existing nuclear and even extending its life where feasible. In very dense countries like Korea and the UK new nuclear might even make sense but for the vast majority of the world renewables, energy efficiency and limited amounts of storage are faster and cheaper.

I am somewhat skeptical of MIT studies as far as I can tell they did not consider excess renewables, smart charging of EVs and water heating, municipal water transfer or even the increasing capacity factors of wind and solar. I have yet to read an MIT study that did not favor nuclear

The question is what do we do for the future. If we look at Germany for example they could build the equivalent of eleven plant Vogtles or more likely eight Hinckley Points on the sites of existing nuclear power plants to supply about 20% of the total energy needs by 2040. This would be world record pace of 17 MW/y/million people  vs China's planned rate of 11 MW/y/million. China's construction industry is orders of magnitude larger than Germany's and far more likely to be able to meet their target. Those new nuclear plants would supply about 180 TWh

On the other hand Germany can start a replacement program of its oldest wind and solar plants when they are between 20 and 30 years old. Panel for panel and one new wind turbine for two old.

Germany has about 23,000 wind turbines installed before 2015 with a total capacity of 38 GW. If they were replaced over the next 15 years with 12,000 wind turbines with an average capacity of 4.8 MW rotors with typically 50% larger per MW, that would increase output by about 150 TWh almost as much as the heroic nuclear program. At the same time its planed increase of 35GW of high output offshore wind will add about 160TWh. Then replacing its pre 2015 38 GW of 120-260 W solar panels with 400-600 W bifacial panels will increase solar output by about 60 TWh. There seems to be little problem with Germany continuing to install rooftop and wasteland solar not to mention agri-voltaics at its current rate of 5-6 GW/y thus adding a further 100 TWh per year for an additional total of 480 TWh/y, with less wind turbines and only a few more large ground mount solar installations. In addition to the 220TWh from existing renewables that is 700 TWh/y, not including geothermal or any increase in waste to energy, wave or tidal energy etc.

A simpler example is Plant Vogtle. US$26bn at latest estimates for 2.2GW peak capacity at 98% reliability and 17 TWh per year. Ten 250 MW wind farms and twenty 250 MW solar farms each farm fitted with a 120 MW 500MWh storage facility would cost about US $15 bn  have a 98% availability of at least 3.5 GW and supply around 21 TWh per year. Plant Vogtle will send about 40GL of water up the cooling towers and cost about $700m in operation and maintenance. the wind and solar plants will use less than 0.3GL of water per year and cost about $300m/y in operation and maintenance. Which investment is better????