Across the United States, the abundant supply of low-cost natural gas and a growing portfolio of gas power plants have put extreme pressure on coal power economically.  Combine that with the high growth in wind, solar and energy storage projects, and the ever-increasing carbon-reduction goals being set by states, communities, utilities, and corporations, and you have the perfect storm.  The result is reduced plant utilization rates and the continued stream of announcements for the early closure of coal assets, including some of the largest power plants in America.

For the better part of three decades, from 1985 through 2014, net operating coal capacity in the United States exceeded 300 GW.  By the end of 2020, it is expected to drop below 240 GW for the first time since 1978, and by 2030, based on plants scheduled for retirement, net capacity is expected to dip below 200 GW for the first time since 1975.  This is based on data compiled by the Hitachi ABB Power Grid’s Velocity Suite research team. 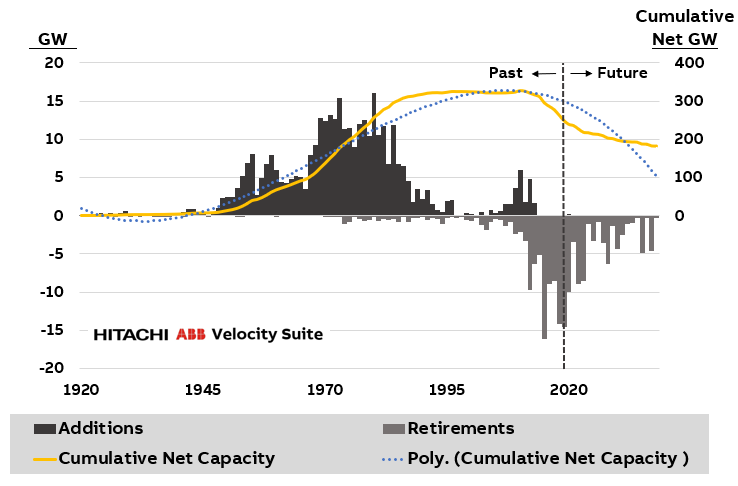 On June 26, 2020, the board of directors of Jacksonville, Florida-based utility JEA, announced they had signed a 20-year contract with Florida Power & Light (FPL) to replace power from the JEA’s minority ownership (23.6%) in the 891 MW Unit 4 at Georgia Power-operated Plant Scherer.  FPL owns the remaining 76.4% of Unit 4. 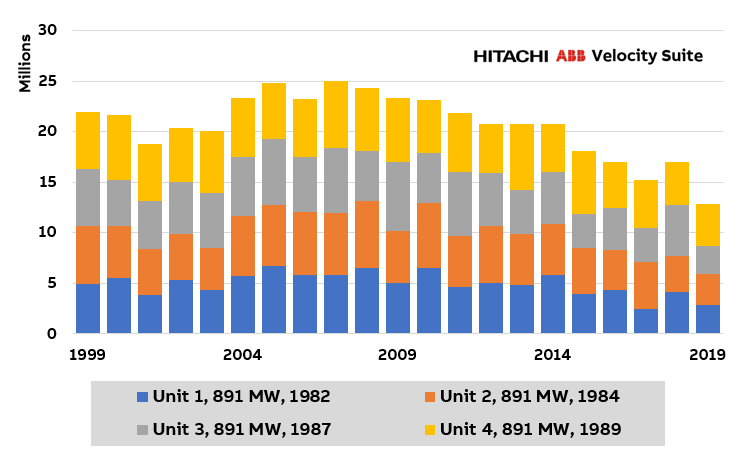 Owners of the three remaining units at Plant Scherer include:

Southern Company subsidiary Georgia Power operates the two largest coal-fueled power plants in the United States – both are in the state of Georgia.  Plant Bowen, the second-largest coal plant in the country, located near Cartersville in Bartow County, is comprised of four generating units built in the early 1970s with a total installed nameplate capacity of 3,499 MW.  Plant Scherer, the largest operating coal plant, is also comprised of four generating units with a combined nameplate capacity of 3,564 MW.  Plant Scherer is located near the city of Juliette in Monroe County.  The plant is named for the former chairman and chief executive officer of Georgia Power, Robert W. Scherer.

The two plants have been huge power supply contributors since the first unit at Bowen started operation in 1971.  During the two decades from 2000 through 2019, Plant’s Scherer and Bowen generated more than 750 million MWh, and as recently as 2010, the two behemoth plants combined generated more than 46.3 million MWh of electricity in a year.  With the closure of Scherer Unit 4 in early 2022, Plant Bowen will become the largest coal-fired power plant based on installed operating capacity in the country.  During the past decade, Plant Bowen has been running at about two-thirds of capacity.  Electricity output averaged 14.3 million MWh per year over the ten-year period from 2010 through 2019 – down from 21.7 million MWh per year during the previous decade. 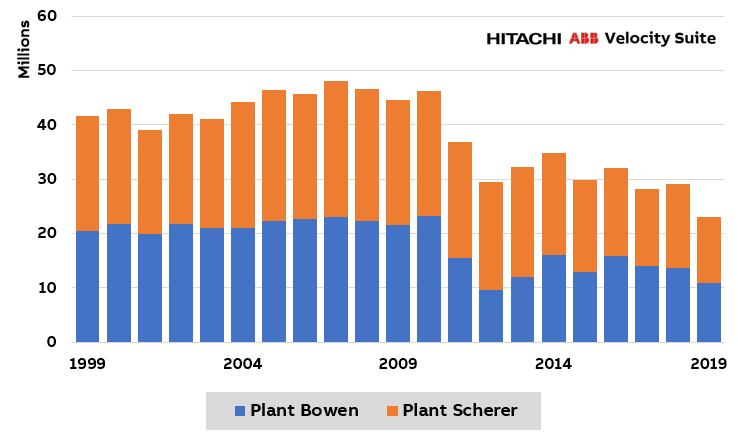 The lowest annual electricity production from both power plants was recorded during 2019 at 23.1 million MWh – about half of the decade peak of 46.3 million MWh generated in 2010.

Along with the upcoming shutdown of Scherer Unit 4, there have been several recent announcements for early coal plant closures across the country, including:

The early closure of Unit 4 at Plant Scherer follows national trends where nearly 100 GW of coal-fired generating capacity has retired since 2000, and between now and 2025 an additional 25 GW are slated for closure.  Driven by economics, competitively priced natural gas, and a surge in cost-competitive renewables and energy storage projects, coal as a utility fuel is in steep decline across America.

"Coal Power in America in Steep Decline," or "Gas Power in Steep Ascent"?

I guess what the real story is depends on one's point of view, but since 2006 gas generation has increased 92% faster than wind and solar combined. With methane flaring and fugitive methane, I'm searching for evidence emissions aren't worse than they were in 2006 - and coming up blank. 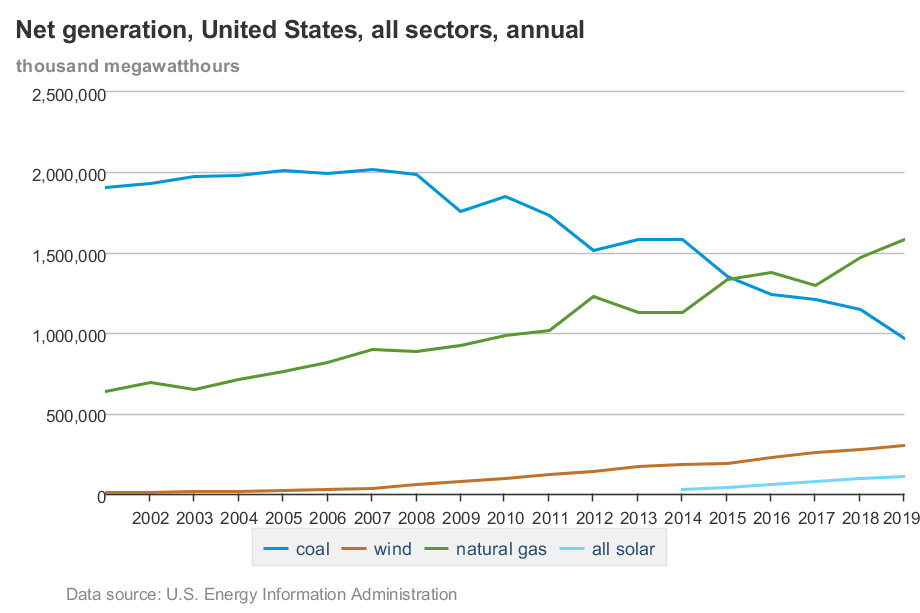 That U.S. carbon, NOx, and fluorinated gas emissions are virtually unchanged since 1990 represents the colossal failure of renewables to lower them in any appreciable time frame. Not sure if that was your point. 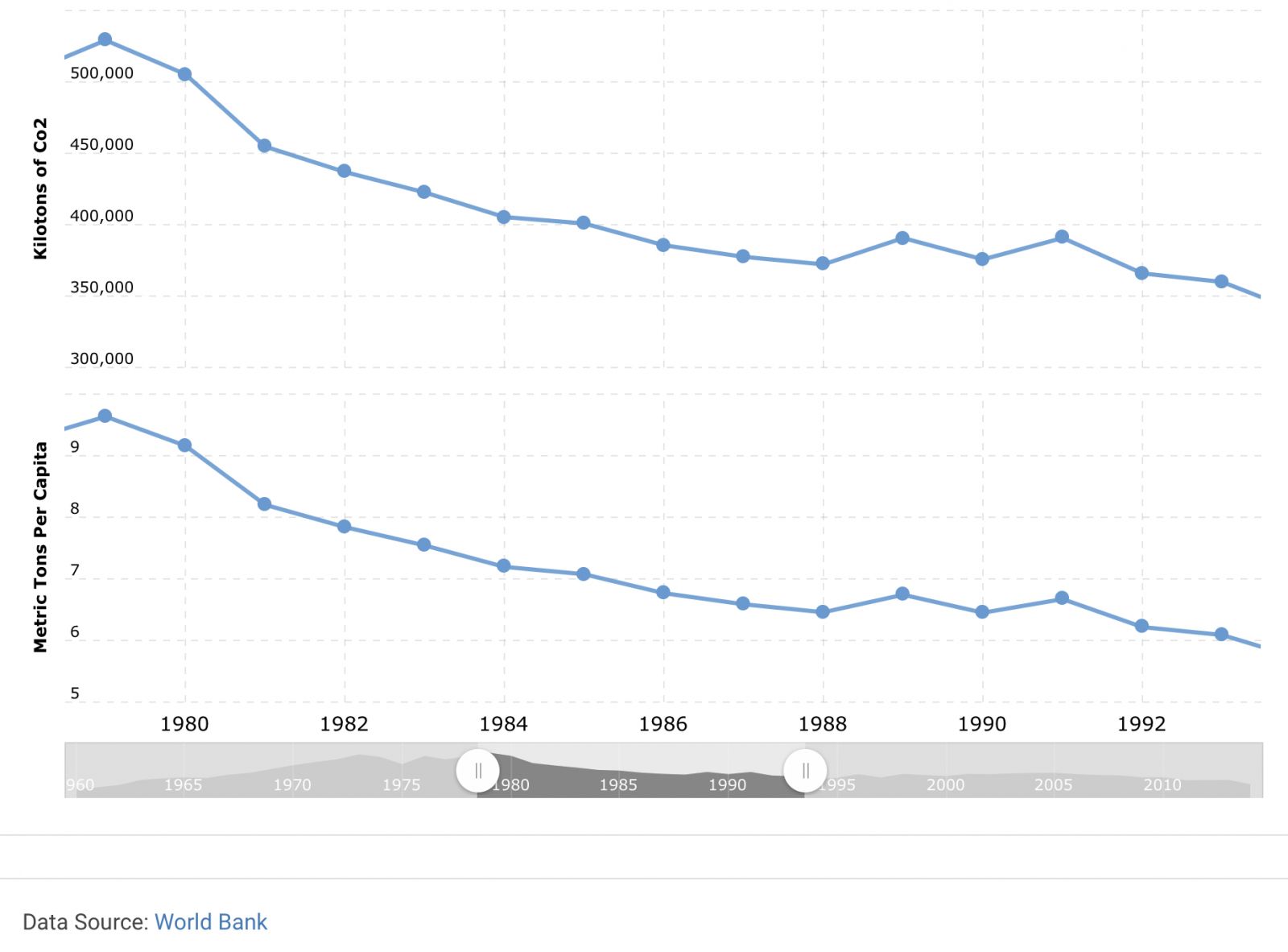 The data thru May is now out.  Here is my favorite nugget from that data...

This is the key to the less competitive COE for coal, Kent's data shows that we still have a very large installed base of coal, 250 GW, but the annualized capacity factor is dropping rapidly so fixed costs are a much larger percentage of the total COE.  In the end, economics wins.  With the PTC and effectively zero variable costs, Wind will always generate, when it can.  So coal will continue to decline primarily due to economics, but the utilities will market this as environmental.

Gary, Joe and Bob, thanks for all your comments and charts.  As Gary put it . . . there are about 250 GW of operating coal capacity out there today . . . and that will dip below 200 GW before or by the end of the decade.     That's still 200 GW . . . that is a lot of capacity . . . Coal has been a god-send to organized markets when the wind dies and sun doesn't shine -- especially during peak periods in the summer and the winter.  Abundant and relatively low natural gas prices have pressured coal downward, but note . . . it doesn't take much of an increase in gas prices to make coal attractive.  It's important to have dispatchable power resources available when extreme weather drives demand upward.  There have been great strides in the integration of renewables and innovation in new technologies like battery storage, but in today's market, it's still extremely important to have a diverse and balanced portfolio of resources.

Do you foresee a future role of coal where it's more often than not dormant but remains 'ready to go' should the supply/demand at the moment require it? There's obviously a point where that becomes economically unsustainable without some sort of payment for it, similar to the payments for on-site fuel storage discussed by DOE that got shot down a little over a year ago

I agree that the recent switch to "seasonal coal" - as implemented by Xcel in MN - is something that may help coal capacity stick around a little longer than expected.

However, let's be clear - there is absolutely no possibility that we will have 200 GW of coal by 2030.  Note:  I prefer using Net Summer capacity as shown by EIA in Table 6.2.C of their Monthly Energy Report.

Using only the EIA planned retirements data is not a realistic way of  estimating future coal capacity. For example, EIA shows that Florida currently has about 7.8 GW of coal summer capacity. The planned retirement report shows 2 units retiring in 2020/2021 for a total of 715MW. This would mean FL would still have 7GW of coal by 2030.  Not a chance.

Pick any state across the country and you can see the same thing. All coal capacity in VA  will be gone by 2030, TX coal capacity will be down from 19 GW now to almost nothing by 2030, etc...

Even WY - the coal capital of the US will see its current 6,400 MW of coal shrink dramatically over the next decade.