After weeks of grid stress across the California Independent Service Operator’s (CAISO) footprint this summer, two significant announcements were made that essentially extend the life of several natural gas power plants and the Diablo Canyon nuclear plant.  The state and federal policy moves were made to make sure the plants would be available to help avoid future rolling power outages driven by supply constraints.

On September 1, 2020, the California State Water Resources Control Board (SWRCB) voted unanimously to let four natural gas power plants continue operation, even though they were slated for retirement at the end of 2020.  The early retirement was driven by the need to meet current state policy on limiting the use of coastal and estuarine waters (aka ‘once-through cooling’, OTC rules).

Three of the gas-fueled power plants – Alamitos, Huntington Beach, and Ormand Beach Generating Station – have been granted three-year extensions, now expiring on December 31, 2023.  The fourth gas power plant, Redondo Beach, was granted a one-year extension.  The amendment also grants the two Diablo Canyon nuclear power reactors a short-term extension to align the retirement dates with the expiration of the plant’s license with the Nuclear Regulatory Commission (NRC).  Diablo Canyon’s reactor-1 can now run until the beginning of November 2024 and reactor-2 through August 2025.

Specs for the five power plants given life extension authorization include:

Along with the announced plant extensions, on September 6, 2020, the United States Department of Energy (DOE) issued a rarely used short-term emergency order under section 202(c) of the Federal Power Act (FPA) to authorize the operation of three additional natural gas-fired facilities on the CAISO grid during peak load hours over a seven-day period.  The order allowed the following power plants to run during high demand hours by temporarily lifting state, local, and federal air quality regulations.

The supply of dispatchable resources declining

Across California, since 2013, more than 13.6 GW of dispatchable gas-fired capacity and 2.3 GW of baseload nuclear capacity has retired.  By the end of 2025, an additional 4.6 GW of natural gas-fueled power, and the 2.3 GW Diablo Canyon nuclear power plant, are slated for retirement.

Exacerbating the supply problem during this summer’s hot weather was the difficulty of importing power from outside of the state.  The heatwave was widespread across the West, making it difficult to bring power into California during peak hours.  Utilities across the West were already strapped and needed what is often surplus power to meet their own customer needs.

How did the resources granted life extension perform during last year’s peak day?

To better understand how these resources might contribute to CAISO’s supply in the future, the Hitachi ABB Power Grids’ Velocity Suite research team compiled data on how the plants performed during the 2019 summer peak day.

The peak hour reached 44.3 gigawatts (GW) on August 15 (Thursday) between 5:00 and 6:00 pm.  During that hour, the five plants recently granted life extensions accounted for just over 4,700 MW, with the Diablo Canyon nuclear plant contributing 49% of that capacity.  During the full day, Diablo Canyon provided the plant’s full 2,300 MW of capacity every hour.  During the peak hour, the four gas-fired power plants, Alamitos (744 MW), Redondo Beach (679 MW), Ormand Beach (629 MW), and Huntington Beach (391 MW) provided 51% of the power from the life extended power plants.  Throughout the day, the five power plants provided more than 83,000 MWh.

Looking at the three power plants given the short-term state, local, and federal emergency waiver for meeting clean air standards, the contribution on that day during peak hour was about 887 MW.  El Segundo (408 MW) and Walnut Creek (479 MW) provided electricity while Long Beach remained idle.  Throughout the day, the two operating gas-fueled power plants provided about 7,500 MWh. 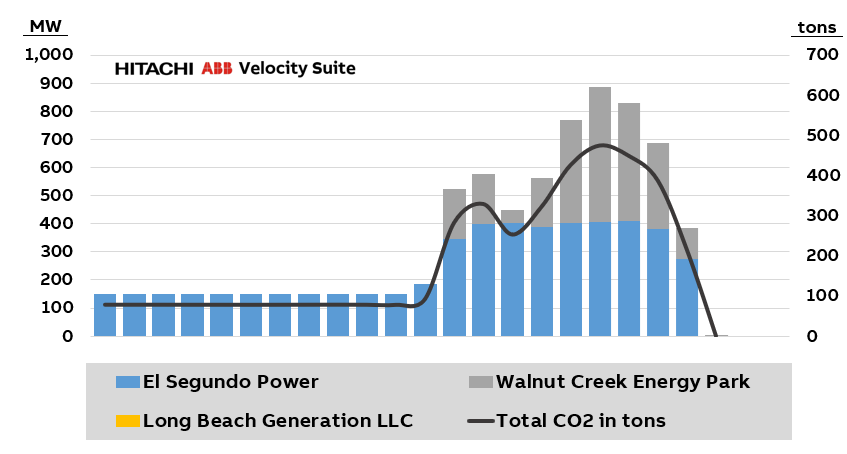 Overall, the seven gas power plants and Diablo Canyon nuclear plant accounted for more than 90,000 MWh through the 2019 peak day and provided more than 5,500 MW during the peak hour.  Having these supply assets available to generate electricity during future peak periods will help prevent the need for load cutting during future high grid-stress events.

This summer’s grid stress was primarily driven by two factors, including the shift in daily peak demand from afternoon hours (4:00 PM to 6:00 PM) to early evening hours (7:00 PM to 9:00 PM) and a seasonal shift in high demand from July and August to August and September – all times when the sun and wind are waning.

The California grid’s future planning targets solar, energy storage, and evolving new zero-carbon technologies like ‘green-hydrogen’.  But until the new clean technologies are energized and contributing around the clock, the need for dispatchable power supply will persist.  The recent moves by state and federal regulators to allow some natural gas plants and the Diablo Canyon nuclear reactors to run longer than previously planned, and to allow some gas plants to run during peak hours and avoid penalties from non-compliance to existing air quality rules, seem designed to ensure that dispatchable resources are available when the grid becomes stressed again in the future.

Interesting positioning of this closure, Boardman had limited pollution control equipment and was the largest stationary SO2 source in Oregon...