Elon Musk keeps suggesting that “Battery Day” will be really big. Originally he indicated it would be in April, delayed it to May. Then he said it will be sometime in June. As I’m starting to write this on June 20, he said that it will be combined with the upcoming shareholder meeting, which was scheduled for July7, but he is delaying that also. He now says that this combined event will be on September 22.

So I’m diving into this subject without him. I am describing the Lithium Ion chemistries he is currently using in Section 2. In Sections 3 and 4 I will discuss new findings regarding advanced technologies and materials that Elon may use. In section 5 we will look at a reasonable projection of future battery pricing. In the last section, I will briefly repeat some information from the last section of my last Elon post, and relate it to earlier information in this post.

In the earlier post, we talked about the “million mile battery”, and although this will be big news, it will not be the biggest news. I believe that an announcement of a future major reduction in battery pricing driven by improved energy density and simplified production will make the biggest headline. This will facilitate many other advancements in battery electric vehicles (BEVs), battery energy storage systems (BESS), and other technologies that depend on these (like EV supply equipment (EVSE), intermittent renewable mitigation, vehicle-to-grid (V2G) and other grid-storage applications).

To prepare for the above, Tesla appears to be prepping to build a battery research and manufacturing facility. Although Elon threatened to leave California, this facility will be in Fremont, CA where Tesla’s mothership BEV manufacturing plant is.[1]

The following are the chemistries that Tesla currently uses:

Lithium Nickel Manganese Cobalt Oxide (LiNiXMnYCoZO2), NMC: This chemistry can be optimized for power or energy-capacity by adjusting the specific cathode chemistry (X, Y and Z above). This especially applies to vehicular applications vs. battery energy storage systems (BESS). It is used for many battery electric vehicles (BEVs), but Tesla uses it for its BESS applications (Powerwall and Powerpack). The market share of the NMC chemistry is increasing as it displaces older designs.

Lithium Nickel Cobalt Aluminum Oxide (LiNiXCoYAlZO2), NCA: This chemistry is the current capacity-champion. It has characteristics similar to NMC, and costs less, but has a reduced safety tolerance. Tesla uses this chemistry for its vehicles. The reduced safety tolerance means that the battery management system must make sure that the batteries stay in a safe operating domain (over-the-air upgrades are good). I believe Tesla/Panasonic also incorporates safety devices in each cell.

LFP (LiFePO4 or 4Lithium Iron Phosphate) Tesla may be planning to use CATL’s design for a million mile battery based on this chemistry, even though it has a lower energy density than the above two. CATL is Contemporary Amperex Technology, Ltd. The Chinese company signed a two-year deal to supply batteries for Tesla's Model 3 cars in February. Its other clients include BMW, Daimler, Honda, Toyota, Volkswagen and Volvo.

Note that a lithium metal anode also can be to upgrade other chemistries, including NMC (but not the NCA).

3. A Million and Much More

As I was reading articles on various improvements Tesla is planning for batteries, one of these gave me a link to a paper from Jeff Dahn’s team that really focuses on battery longevity. As a reminder, this team from Dalhousie University (Nova Scotia, Canada), developed an advanced design for NMC Lithium Ion batteries. Jeff (and one assumes his team) now leads Tesla’s Advanced Battery Research program in Canada.

The subject paper is referenced here.[3] Note that this was published in September of last year. I will summarize this below, and would recommend that readers consider reading it themselves. However first, two definitions:

We defined the three chemistries that Tesla is looking at in section 2. The referenced paper mostly looks at NMC. To specifically define an NMC battery you need to chemically specify the quantities of its cathode components, and the material used in its anode, like: LiNi0.5Mn0.3Co0.2O2/artificial graphite. This battery has a metallic-oxide cathode composed of lithium plus nickel, manganese and cobalt oxides (in the proportions indicated) and an artificial graphite anode. A short-hand format for this would be NMC532/AG.

Some of the details I took away from this paper is that there are many methods to extend battery longevity. These include: specific battery design elements, how batteries are charged, stored and discharged, and battery operating temperature. Secondary elements can be used to control all of the above use-related and environment-related elements. For instance, improved cooling and battery-packaging can reduce the operating temperature and thus extend the lifetime (see chart below). 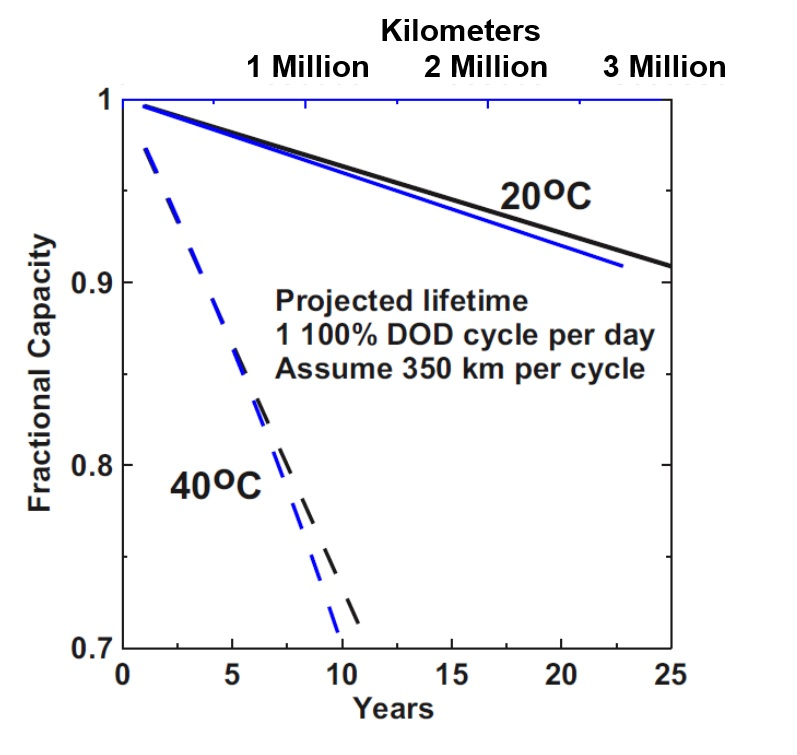 In the above chart, note that the blue lines are for BEVs (top numbers, note that 1 million miles is roughly 1.6 million km) and the black lines are for BESS. DOD is depth of discharge, 20°C is 68°F and 40°C is 104°C. Also note that Tesla’s BEV designs use the heat pump or air conditioner to cool their battery packs.

Use cycles for BESS are much easier to control than for BEVs. However as battery packs become larger in the latter application, many of the elements of the use-cycle (like operating temperature) become easier to control. Larger battery packs could be driven by the desire for more mileage, higher performance and/or applications with larger vehicles (read: Tesla Simi).

Tesla recently bought Maxwell whose primary products are energy storage devices, albeit ones with substantial differences from lithium ion batteries. Maxwell makes ultracapacitors. These devices can charge and discharge much more rapidly than batteries, but have a lower energy density.

However, it is believed that Elon’s primary interest in them is NOT ultracapacitors, but instead a major component of these devices that can be also be used in batteries: the dry battery electrode. The primary source for this section is a paper written by the primary developers of this technology, and referenced here.[4]

For the past several years, Maxwell has been engaged in research and development efforts to expand the application space of its dry coating electrode process technology to apply to battery electrode manufacturing processes. Cell performance using prototype dry coated lithium-ion battery electrodes has been demonstrated. Dry coated electrode configuration with various architectures using a wide range of materials can be produced at thicknesses ranging from about 50 microns to about 1 millimeter. In addition to manufacturing flexibility, the cohesion and adhesion properties of electrodes derived from the dry coating process are superior in the presence of electrolyte at high temperatures compared with those produced using the wet coating technology.

Maxwell’s proprietary dry coating electrode technology is comprised of three steps: (i) dry powder mixing, (ii) powder to film formation and (iii) film to current collector lamination; all executed in a solventless fashion. Maxwell’s dry coating electrode process is scalable, and can accommodate current lithium ion battery chemistry and advanced battery electrode materials. In this report, the robustness of the dry coating electrode process is demonstrated using a host of commercially available anode materials such as silicon based materials and lithium titanate (LTO), as well as cathode materials such as layered Li(NixMnyCoz)O2 (NMC), LiNi0.8Co0.15Al0.05O2 (NCA), LiFePO4 (LFP) and sulfur. All dry powder materials were mixed using Maxwell’s proprietary dry coating process to yield a final powder mixture consisting of active material, binder and conductive additive as shown in figure below (left). This powder mixture was calendered to form a continuous self-supporting dry coated electrode film that is wound in roll form (right). A wide range of dry coated electrode configurations can be produced by the adjustment of film processing conditions to control material loading weights and active layer thickness.

There is a “magic number” in the electric vehicle (EV) industry: $100 per kWh. Why is this a magic number? Read on.

The battery pack is the most expensive component in a mass-produced EV. When the cost of this battery reaches roughly $100 per kWh of capacity, BEVs will reach initial purchase price parity with internal combustion powered vehicles (ICVs). BEVs already have many inherent advantages over ICVs. I wrote one of my first posts on BEVs over two years ago, and this is linked below. In section 4 of this paper, I pointed out the intrinsic and political advantages BEVs have over ICVs.

An analysis in reference 2 above shows that Tesla is approaching the magic number, and will likely pass this within a few years. In addition to the components reviewed in this post, I believe this is also because of their much greater experience in mass producing battery packs for BEV and operating experience by those BEVs, than any other BEV manufacturer.

Increasing cap and trade and carbon tax adders to the price of gasoline and diesel will make the operating cost of ICVs much more expensive than BEVs (it’s already significantly higher – read the above linked post).

I’m guessing that the above design is compatible with dry battery electrodes (section 3), which would explain why Elon bought Maxwell.

Another innovation from Mr. Dahn’s team is a battery systems with fewer operative, electrolyte additives. This design seems to be compatible with both BEVs and large BESS. This improvement also enhances performance and lifetime of Li-ion batteries, while reducing costs verses other systems that rely on more additives.

I wouldn’t be surprised if Maxwell had tested Mr. Dahn’s additives.

Note that most of the above components and processes (including dry battery electrodes) simplify and accelerate the manufacturing of lithium ion batteries. Also most (if not all) of the above are heavily protected (read: patents or proprietary designs). It is clear Mr. Musk wants to go to a place where no one else can follow (including ICVs). It should be fun watching Tesla dominate the BEV and BESS markets.

[2] Juan Carlos Zuleta, Seeking Alpha, “Why Tesla Should Be Aware Of The New 'Holy Grail' In Lithium Batteries”, June 10, 2020, https://seekingalpha.com/article/4352962-why-tesla-should-be-aware-of-new-holy-grail-in-lithium-batteries