For a long time now, observers have worried that Texas’ grid could be brought to its knees by a severe weather event. The logic is simple: the lonestar state starting building up its wind portfolio at breakneck speed last decade and shutting coal plants. Simultaneously, demand has skyrocketed thanks to migration into cities like Austin. In the summer of 2019, during a nasty heatwave, the worst case scenario almost materialized. ERCOT, the state’s grid operator was forced to issue an Energy Emergency Alert. They got through by a thread, however, and never had to issue any blackouts.

But ERCOT and Texas’ luck has run out. Monday, a big snowstorm hit east Texas and south east Oklahoma. The Dallas-Fort Worth airport got just over 4 inches of snow, the highest in a decade, and Oklahoma City got 6, respectively. Both states, accustomed to mild winters, have seen demand shoot up well past normal levels. At the same time, the cold and snow have incapacitated many gas lines and wind turbines. The effects have been disastrous: Millions of customers in both states were without power yesterday.

ERCOT responded by issuing an emergency alert and pleading with customers to practice conservation. The operator also told transmission owners to cut 14,000 MW of load. As of yesterday afternoon, ERCOT has been unable to offer a prediction as to when the rolling outages will end.

This situation has attracted the attention of both state and federal legislators. Yesterday, Texas Governor Greg Abbot directed the state legislature to investigate ERCOT and the outages. FERC and NERC also called for investigations. Formal inquiries will begin once power has been restored across the region.

Both industry commentators and ERCOT spokespeople have continued to bring up the exceptionality of the weather event. On monday night, demand hit a record setting 69,150 MW, while the peak demand forecast for 2026/27 is just 67,512 MW. I won’t argue that the storm is normal, but shouldn’t operators be prepared for exceptional demand a couple times a year?

Moving forward, it would seem to me that ERCOT will need to revise their peak demand forecasts, preparing for extreme weather events and increasing demand due to EVs and a growing population. However, even if predictions are more intelligent, the state still may have a generation dearth. It’s not as easy as pointing a finger at the state’s overreliance on unscalable wind, either. As I already mentioned, the great majority of generation lost during this event was gas. This seems like an easy problem to mitigate: outfit gas equipment for the cold.

But regardless of how easy the specific lessons of this storm may be, it still seems there’s a larger and tricker pattern emerging across the industry. Over the past few years, operators have been caught off guard by surging demand: Through California and much of the west last summer, and now in Texas and Oklahoma. More extreme weather, changing demand patterns, and an awkward transition to renewables are all to blame.

What’s the solution? I’m all ears.

The Southwest Power Pool's solid-red "Price Contour Map" is showing a shocking lack of contour this afternoon, with wholesale electricity costing anywhere from $.60 to $1.50/kWh in 14 states. Ouch. 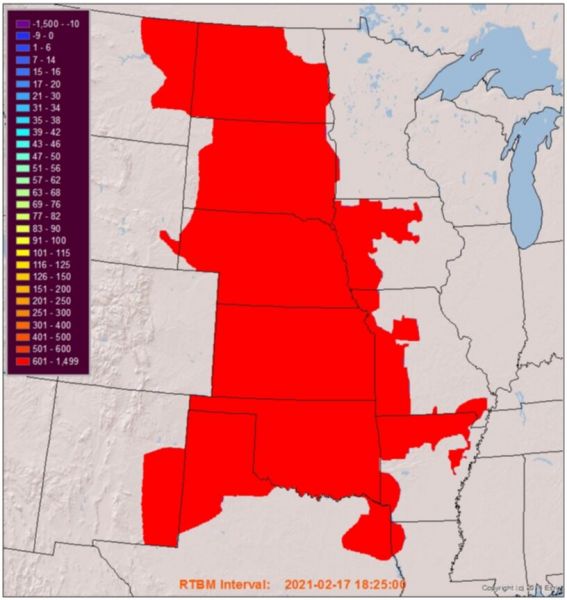 Henry, without getting into details, you know what I believe is the solution. But I wanted to point out that ERCOT officials are doing the same thing their CAISO brethren did after the August blackouts in California: deliberately confusing consumption with demand.

Demand is literally how much electricity consumers are demanding at any given point in time. With blackouts, however, it's impossible to know exactly how much consumers would have used, had the grid been functional. We can estimate - very closely, in fact - by extending the demand curve to form a classic bell curve above consumption, assuming blackouts are gone before demand begins to slow again that evening.

On the morning of August 18, with triple-digit temperatures expected, and after predictions of rolling blackouts later that day, CAISO changed their mind. Meeting demand would not challenge supply as much as they thought, they announced. Then a strange thing happened: rising consumption reversed suddenly, beginning about 1:30 PM in the afternoon, and dropped about 2GW before starting its rise upward again.

If you're familiar with demand curves, they're gentle - not like the erratic supply curves coming from wind and solar farms. On hot days they're taller than cooler ones, but otherwise are as predictable as the average demand of 38 million people living in any service area would be.

The departure from that smooth curve at 1:30 PM on August 18 wasn't 6 million people simultaneously deciding to turn off their air conditioners - it was CAISO initiating unannounced blackouts, possibly to avoid the negative national news coverage California had received from blackouts the week before, and likely at the direction of Gov. Gavin Newsom.

That's what I suspected, anyway. And after discovering local reporting of blackouts occurring that day at 1:30 PM, and later that day, I'm certain of it.

So when you hear utilities claiming it was the voluntary response of consumers to a "Flex-Alert" or some other excuse, there's a very good chance they're lying - that it was a "non-demand drop in consumption",  aka, a blackout, and it probably had something to do with intermittent, unpredictable renewable energy.