Northern California power consumers are not out of the woods yet. Last week, PG&E cut electricity to around 31,000 households and businesses across NorCal. In mid-October, the trifecta of dryness, heat, and high winds put the region at risk for more fires. Following a summer of unparalleled land loss, the embattled utility was left with no choice.

Obviously, this latest round of power disconnections has little to do with load management and everything to do with disaster mitigation. However, to the customer there is little difference between rolling blackouts because of supply and demand mismatches and the outages employed to prevent fires. At the end of the day, their homes or businesses don't have light. And while almost all of California's outages this summer fell into the risk management category, PG&E walked a thin line when it came to load management.

Save some land management innovation in the West, the risk of wildfires is almost certain to force utilities in the region to cut power for many summers to come. The big question for utilities, however, is whether they’ll be able to keep up with increasing demand while hitting carbon cutting goals.

The Golden State’s summer and fall really should have taught us not to underestimate the consumption potential of residential customers. Until now, market-based demand response programs in the industry have generally focused on commercial consumers. It’s pretty intuitive: Commercial operations just consume much more power—or so we thought. Whether due to COVID-19 and the swarms of people it’s forced to work from home, or some other trend I’m unaware of, CAISO ended up having to focus their load management efforts on households to keep up with demand. The operator escaped by the thin or its teeth using limited tools like flex alerts. Although residential consumption is likely to decline as the world opens up next year, many workers, especially in affluent places like the wine country of California, will stay remote. Moving forward, utilities and operators will want to improve residential response programs.

However, there’s a deeper root cause CAISO faced this year, and it's something other regions are setting themselves up to contend with too. When consumption shot up in California, the operator struggled to meet demand with the slew of unscalable renewables available to it.

California has very ambitious clean energy targets, shooting for 100% carbon-free power by 2045. Over the past decade, the state has loaded up on renewables, which has drawn praise from the usual suspects—well intentioned but ignorant commentators who don’t really understand how the grid works. CAISO was left scrambling for extra generation as demand soared this summer, and their renewable sources didn’t always come through. Batteries will improve and mitigate this problem, but not fast enough.

Despite the problems we saw in California this year, progressive states around the country are pushing ahead with plans to replace scalable energy sources with renewables. Take New York, for example. This past Thursday, the New York Public Service Commission expanded the state’s Clean Energy Standard, allowing for greater renewable use in NYC and paving the way for further wind growth. This latest development is part of last year’s much publicized Climate Leadership Protection Act, which pledges to reduce the state’s carbon emissions by 40 percent by 2030 and 85 percent by 2050.

At the same time as legislators are pushing to get their states to 100% renewables, the private sector is trading in gas powered vehicles for electric ones. All the big truck companies are developing and hyping up electric models, the most recent being the Kenworth T680E. Amazon, with the stated goal of being carbon free by 2040, is gearing up to phase in electric delivery vans in 2021. How will states without access to deep scalable energy sources be able to keep up with the demand created by hoards of electric amazon delivery trucks and the likes?

The situation I described is a load management nightmare. Yet maybe our operators will be spared. No, not by the intelligent adoption of renewables alongside increased investment in nuclear power. Rather, it's possible the coming transportation revolution will actually decrease demand on the grid, even if the vehicles themselves are electric. Stephen Baker, a co-author of the book Hop Skip Go: How the Mobility Revolution is Transforming our Lives (Harper Collins, 2019), touched on this point in an interview he gave me last year:

For the sake of dependable electricity, let’s hope Mr. Baker is right.

Henry, after crawling along in stop-and-go traffic on L.A.'s notorious 405 freeway one day, and noticing that one in three cars around me had an "Uber" or "Lyft" sticker in the back window, I'm having a hard time imagining a future of reduced energy consumption - even if the cars are autonomous.

In L.A. there are more cars on the road than ever, whether shared or not, and with the number of electric cars constantly growing we'll need to address both reliability and increased emissions from electricity generation.

What will generate reliable, baseload electricity for California in the future...maybe huge, grid-scale batteries? The graph below offers some clues: 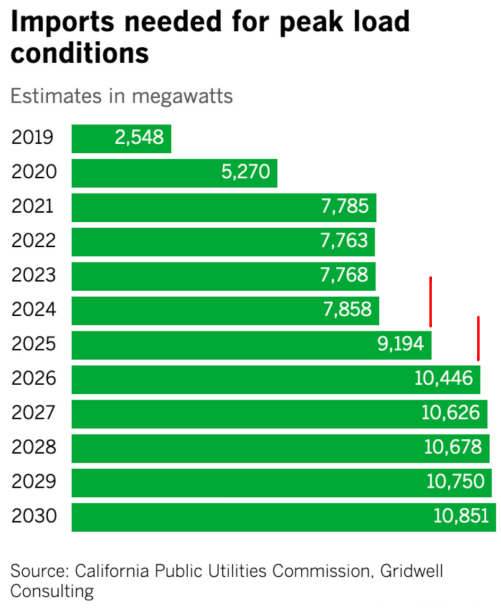 The two 1.2-gigawatt bumps in the graph above, in 2025 and 2026, correspond to the closure of Diablo Canyon Units 1 & 2, and show clean electricity from the plant will be replaced by dirty, imported electricity.

California electricity is getting expensive though, and maybe imported electricity will be cheaper. We can count on regulators in other states to prevent the exploitation of California customers, can't we?