Following a request by the California Governor Gavin Newsom to find the root cause of the outages in mid Aug 2020, the 3 agencies responsible for keeping the lights on released a report on 6 Oct. titled Preliminary root cause analysis: Mid Aug 2020 heat storm. Apologetically, the California Independent System Operator (CAISO), the California Public Utilities Commission (CPUC), and the California Energy Commission (CEC) said that they recognize their “… shared responsibility for the power outages many Californians unnecessarily endured.” Good way to start, with an apology and a pledge not to let it happen again.

They said several factors, in combination, led to the need for the CAISO to order the rotating outages including:

The joint report said, “… it is our responsibility and intent to plan for such events, which are becoming increasingly common in a world rapidly being impacted by climate change.”

With the recent devastating wild fires, still burning, the impact of climate change is not disputed in the West.

“From August 14 through 19, 2020, the Western US as a whole experienced an extreme heat storm, with temperatures 10-20 degrees above normal. During this period, California experienced 4 out of the 5 hottest August days since 1985; August 15 was the hottest and August 14 was the third hottest. This heat event was the equivalent of the hottest year of 35." 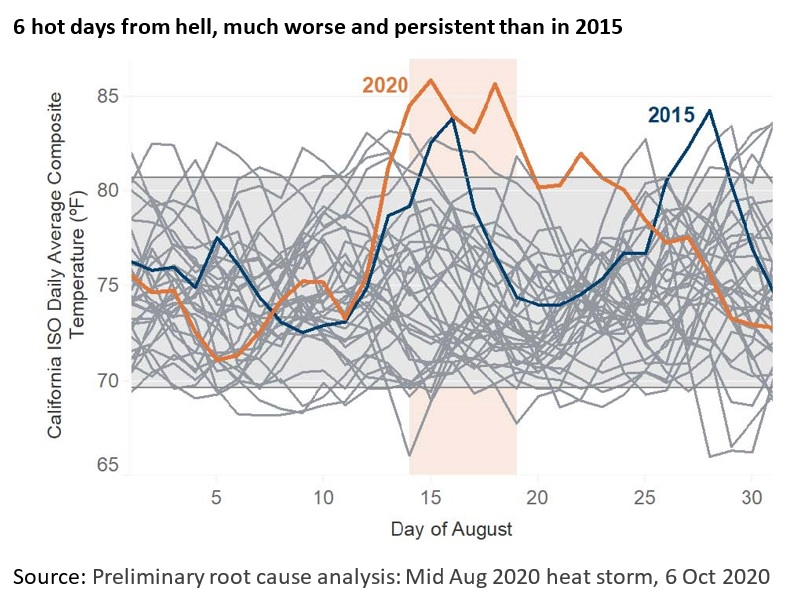 What happened on 14-15 Aug is not in dispute either. CAISO has to maintain minimum reserves at all times, approximately equal to 6% of the load. At 6:38 pm on 14 Aug it was forced to initiate rotating outages for about an hour affecting roughly 492,000 customers for 15 to 150 minutes (Table). 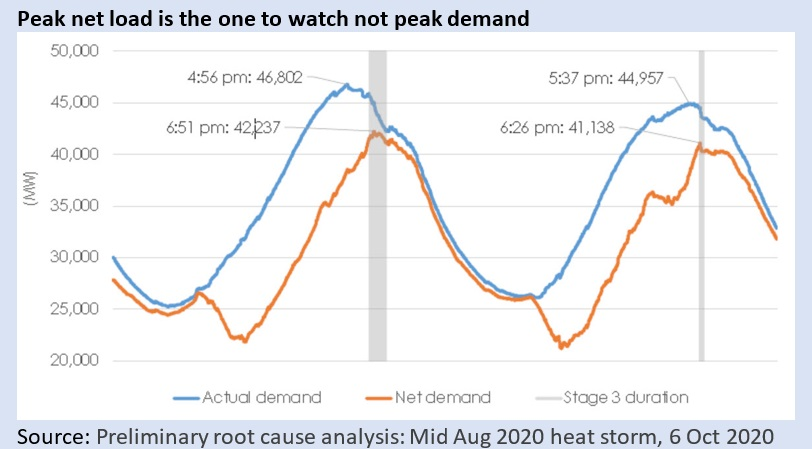 As often happens, CAISO’s net demand, that is demand minus solar and wind generation, peaked at 6:51 pm after the sun had already set

To be sure, mid Aug was unusually hot and not just in California. Between August 14 through 19, California experienced state-wide extreme heat with temperatures ranging 10-20 degrees F above normal exposing 32 million residents to extreme heat. Across the West, some 80 million people fell within an excess heat watch or warning (map below).

The report is a must read for the technical types, perhaps a tad too technical for others. Its main message is that 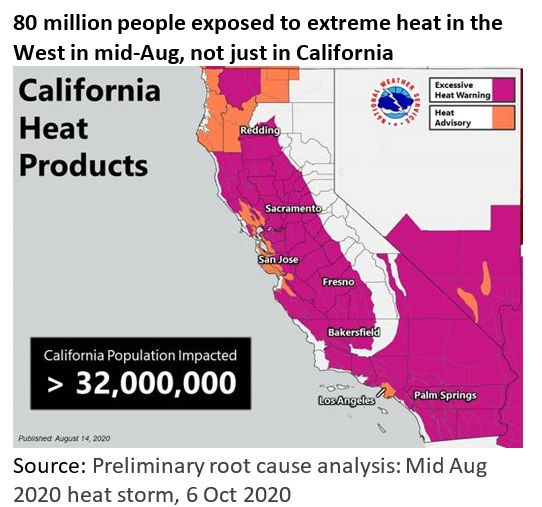 The report notes that it is not the traditional peak demand, which occurs in midafternoon, that breaks the system but net load peak, which happens in the early evening hours after the sun has gone down – while the demand remains high. It said, “The net demand peak is becoming the most challenging time period in which to meet demand.” This, however, should not have come as a surprise to anyone at CAISO.

Other major deficiencies of the current market is the lack of adequate demand response (DR) – many reasons why this is the case. While the details are still being investigated, DR programs reduced load by an estimated 1,200 MW on Aug. 14 and about 1,000 MW on the following day, a fraction of the technical potential. Why so little? Perhaps the retail prices are not right. It is a long story.

Other factors contributed. During the 2 critical days, a transmission line sending power from the Pacific Northwest went offline because of the heat, reducing the flow by 330 MW while other lines were threatened by raging forest fires. Wind was more-or-less non-existent when it was needed, and solar output was adversely affected by smoke from the fires and the clouds. Making matters worse, some practices in the CAISO’s day-ahead energy market exacerbated the challenges – it is complicated (Box).

Glitches in market rules and software allowed exports out of California

During California’s last electricity crisis in 2000-01, manipulating power traders including Enron, were able to take advantage of loopholes in the market rules that allowed them to fictitiously ship power out of state at low costs and buy it back at much higher prices, making obscene profits in the midst of the power shortages.

As it happens, unintended market rules in the CAISO day-ahead market bidding plus glitches in the software allowed scarce resources to be shipped out of California while the reverse should have happened. Buried amidst technical details, CAISO said that its Residual Unit Commitment (RUC) model erroneously led dispatchers to believe that approx. 4,000 MW of power exports, could be supported during the crisis days in mid-Aug. We now know that should not have happened.

Starting on Sunday 16 Aug, CAISO began to cut the erroneous exports and suspended the so-called convergence bidding. It apparently took 3 weeks for CAISO programmers to detect the technical flaws and fix the glitch. It says the software has been fixed, fingers crossed. n

What needs to be done? The agencies said they would work together to:

None are easy to do. All will be needed if California is to avert future outages in the years ahead. Elliot Mainzer, the new CEO of the CAISO said, “We are committed to working with the Governor’s office, state agencies, and the broad set of stakeholders in California and across the Western US to accelerate our efforts to reliably decarbonize the electricity grid.” Just what you expect the CAISO’s CEO to say after an embarrassing outage.

Not everyone was pleased with the assessment. According to a 13 Oct article in the CA Current, Jim Patterson, the vice-chair of the California Assembly Utilities & Energy Committee publicly castigated the state’s 3 energy agencies, claiming their report was essentially finger pointing and excuses. The agencies blamed the extreme heat – a 1 in 35-year event – as the main culprit. Patterson insisted that the outages were because of reductions in fossil fuel capacity and the rise in renewables. The former is true, the latter not – renewables were not to blame.

CAISO’s outgoing CEO Steve Berberich begged to differ, noting that renewables have served up to 80% of the system load. Other experts also testified on remedies to prevent future outages, including additional flexible resources specifically available after sundown, more DR, more and longer duration storage, and so on.

CPUC President Marybel Batjer said 2,400 MW of additional resources are expected to be online by next summer with plans to increase RA levels by 2022. n

Fereidoon, CAISO is right that there was poor planning involved. What they couldn't admit was that most problems were in San Onofre's service area, and the loss of 2.2 GW of nuclear electricity in 2013 was to blame.

After getting nowhere with corrupt state politicians, Californians for Green Nuclear Power have filed a complaint with the Federal Energy Regular Commission, who is taking their allegations seriously. The planned 2025 shutdown of Diablo Canyon will only make things worse, and FERC is responsible for maintaining reliability on the interstate grid.

There is compelling evidence Edison, in 2012, was forced to replace San Onofre with dirty imports, and that together with unreliable renewables, problems would compound over time. The unplanned outages in August proved it.

To be sure, mid Aug was unusually hot and not just in California. Between August 14 through 19, California experienced state-wide extreme heat with temperatures ranging 10-20 degrees F above normal exposing 32 million residents to extreme heat. Across the West, some 80 million people fell within an excess heat watch or warning (map below).

Warming climate may be to blame, but unfortunately it's time to start planning ahead for these inevitable impacts. A dangerous and underdiscussed climate change feedback loop, perhaps.

"... renewables were not to blame". What delusional nonsense. The resource was not available when needed.
Over reliance on an unreliable energy resource is just not very bright. Instead of kowtowing to brainless politicians, the energy managers need to point out "the emperor has no cloths".
As for the climate, California is and has been largely a desert for thousands of years. Fill the space up with million and millions of people and you will have problems. The Western US has experienced droughts and heat waves for thousands of years.