What does the Trade War have to do with Energy Efficiency?

Wesley Whited has been focusing on innovation in the commercial lighting markets for the past 8 years, with professional experience in utility program design, new business development, and...

LEDs are digital, meaning that they emit light from a special semiconductor material. As a digital technology, LEDs are subject to the price-performance of electronics. In computing, this price-performance is commonly referred to as ‘Moore’s Law’, but with LEDs we refer to this phenomenon as ‘Haitz’s Law’. Haitz’s Law states that every decade, the cost per lumen of an LED falls by a factor of ten, while the amount of light emitted by the diode increases by a factor of 20.

As a lighting specialist, my expectations for LED technology are rapid improvements in efficacy (higher lumens per watt) at lower per unit costs. The price-performance of LEDs is why Goldman Sachs refers to the adoption of LEDs as “one of the fastest technology shifts in human history[1].” So, what does any of this have to do with the Trade War?

The Trouble with Tariffs

First, tariffs increase prices for a diverse spectrum of technologies— including digital technologies. In a blog post last November, I covered the effects of uncertainty on utility energy efficiency programs. Around 85% of LEDs are manufactured and assembled in China, representing about USD$5 billion worth of product subject to tariffs.[2] Manufacturers have responded by raising prices, with RAB Lighting being the latest to announce an average increase of 15% on May 14, 2019[3]. To be clear, rising prices are bad for everyone, and are especially bad for utility energy efficiency programs. As the ‘go-to’ tech for cost-effective electricity savings, rising LED prices dilute the impact of the utility incentive. LEDs are an elastic good with a price elasticity of demand coefficient of -1.54, meaning for every 1% increase in price we would expect to see a corresponding 1.54% decrease in sales[4]. In theory, higher prices should slow LED adoption rates — but here is where the real world adds a layer of complexity.

While creating uncertainty in the short-term, the Trade War may accelerate the adoption of LED technology while simultaneously making it more efficient in the long run. So how can higher prices speed market adoption and make a better product? The answer lies at the nexus of Rare Earth Elements (REE) and currently installed lighting technology.

China holds a near monopoly in mining and processing REE[5]. As the Trade War accelerates, China has threatened to restrict imports to the US. Rare earth phosphors are used in the manufacturing process for both LED and fluorescent technology to produce various color temperatures and increase energy efficiency. While both LED and fluorescent technologies currently require rare earth phosphors, fluorescent technology requires orders of magnitude more REE than LED, making it much more exposed to potential steep price increases. Raising the input price of REEs could represent the final nail in the coffin for fluorescent and HID lighting, speeding the transition to LED.

Where we are at today

While LED may get all the hype, two-thirds of all lighting energy consumption comes from only two sources: linear fluorescent and HID. Lighting for commercial spaces (primarily linear fluorescent) accounts for 40% of all lighting energy consumption.  From 2010 to 2015 T8 fluorescent technology rose from 60% to 75% according to the most recent Department of Energy (DOE) lighting market characterization study. When we study the graph below, we see that linear LEDs are currently a small part of the total picture, about 8%...but things are projected to change rapidly.

Dan Mellinger produced the below graph for the  Design Lights Consortium’s (DLC) recently published “Energy Savings Potential of DLC Commercial Lighting and Networked Lighting Controls”. Over the course of the next decade, we are on the verge of a paradigm shift in commercial lighting. LED linear lamps, which have about 10% market saturation today, will have an estimated 70% market saturation in 2029. For scale, we are talking about retrofitting BILLIONS of T8 fluorescent lamps in nearly 100 BILLION square feet of commercial floor space. 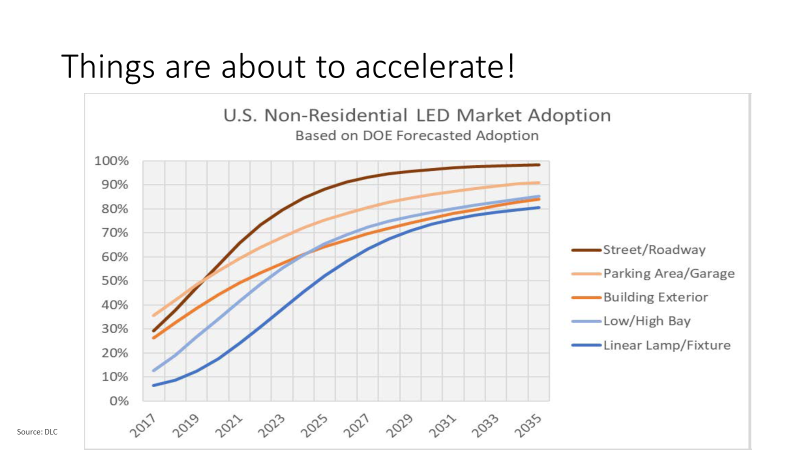 This transition is happening organically, by which I mean the general marketplace is acknowledging that LEDs have a higher value proposition relative to legacy lighting technology. While the value proposition of LED is high, it clearly has not been enough to induce the mass market to force their legacy lighting systems into early retirement. However, as stated above, price increases in fluorescent replacement lamps, which may be 10 times more exposed to price spikes, should speed the natural transition to LED adoption. In economic terms, fluorescent lighting technology may no longer be viewed as a substitute good for LEDs, even if the price of LEDs increase due to tariffs.

That leaves us with the question, how do rising prices make LEDs more efficient? This brings us back to LEDs being a digital technology. To be efficient, LEDs produce shortwave blue light. This blue light is then absorbed by REE phosphors and reemitted as longer wavelength light. This process is called “light down conversion” and it is how we can produce LEDs with different color temperatures and is also why cooler color temperatures are more energy efficient than warmer temperatures. Enter the Quantum Dot (QD), a radically new manufacturing technique that can improve the light down conversion process without using REEs. QD are semiconductor particles that are about 10,000 times smaller than the diameter of a human hair. QD technology enables LEDs to be both more energy efficient and offers higher levels of visual quality. For example, Osram is currently offering a CRI 90 fixture with 173 lumens/watt at 3000K. For some perspective, I pulled a random spec sheet for a CRI 90 fixture at 3000K and found that its efficacy is 70 lumens/watt – QD is a whopping 60% improvement in energy efficiency!

Wrapping up this thought

To sum things up, LEDs are digital. As such, our expectations are for continued price declines — tariffs throw a monkey in the wrench into those expectations. Rising prices should slow the speed of LED adoption. However, if China restricts REEs, it will not only speed the adoption of LEDs, it will also make them more efficient. Because LEDs can be manufactured without REEs,  this new manufacturing process will improve both the fixture’s efficiency and quality of light it emits.

As always, I’d love your thoughts on this topic.

Wesley Whited is a Senior Consultant for Smart Lighting Systems at DNV GL. Mr. Whited has eight years’ experience in the commercial lighting market ranging from utility program design, project management and specification sales. He sits on technical committees for both the DLC and IES. Mr. Whited is a graduate of West Virginia University and holds an MBA from Capital University in Columbus, OH.

You know how to write a good headline, Wesley, since I couldn't answer the qusetion myself and had to read!

Great, well-researched stuff here. I would have anticipated before reading your piece that we were close to a saturation point with LEDs and everyone pretty much knew to use them, so your insights on the non-residential market are quite useful. It sounds like we have a decade or two to go until commercial lighting is at that point-- other than tariffs, do you have other concerns about what might slow that adoption?

Glad to hear it, and excited to see it come into fruition! Thanks for the reply