35-plus years as an environmental advocate focusing on money-saving clean energy.   Until about three years ago, that meant I worked with electric utilities on efficiency programs.  Today I'm...

Sometimes I just have to scratch my head...

I made this graph to show what I'm seeing: 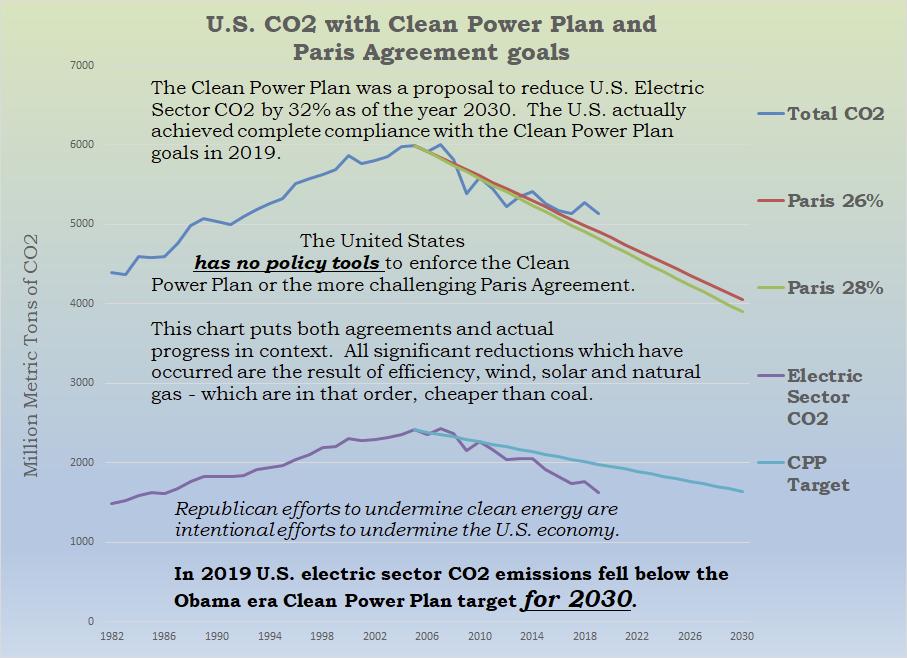 This is made from EIA data, with me converting some of the data into a graphic image.   How is it that no one else has noticed that the U.S. is fully in compliance with the Obama Clean Power plan, 12 years early?

There's a much more important set of observations to make about this chart, starting with the fact that the observed changes in different generation fuels rules out the possible assumption that this is due to natural gas replacing coal.   I also recently observed that the EIA 15 Tables (https://www.eia.gov/electricity/state/ohio/) now includes Table 13, which describes efficiency, both annually and cumulative, which makes the point I'm trying to make a lot more strongly.   The explanation for the radical drop in total CO2 becomes clear when you look at the data in terms of generation by fuel:

I've made the following chart for Ohio.   I'm much more confident of the Ohio data than I am of the U.S. data, but you would find if you look, that the U.S. EIA tables (take the link above and change the page to any other state or the total U.S. to get the 15 tables for that area) that the U.S. acheivement is at least as strong as Ohio, which was on average with the U.S. as a whole until passage of the HB 6 law last year, which won't affect programs until next year: 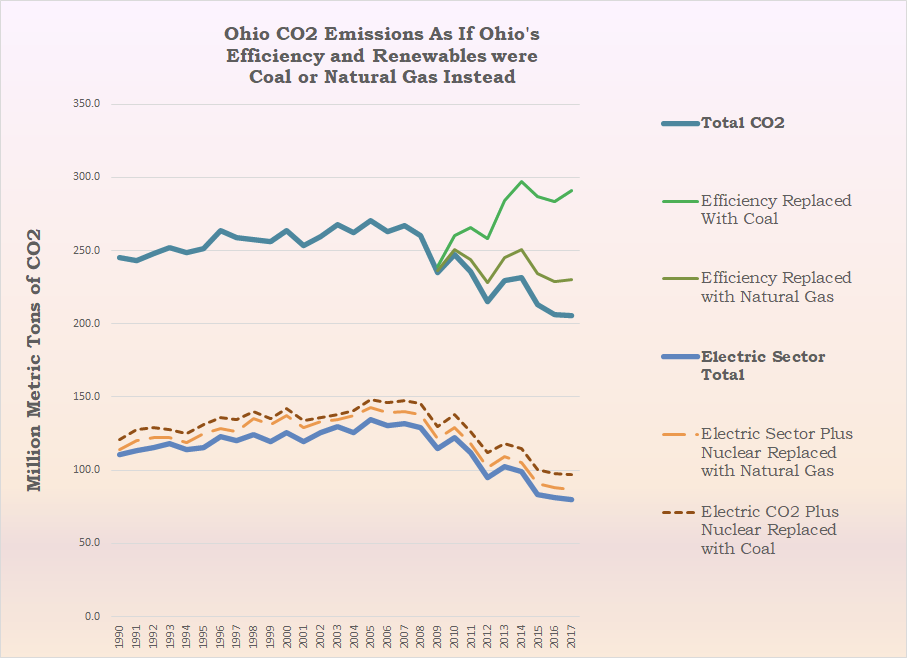 Ohio wind and solar are trivial.  This is true for the U.S. as a whole, but wind and solar would be a line on the graph, much smaller than either nuclear power or efficiency.   Ohio's nuclear is almost exactly the same fraction as the total U.S. nuclear.  Also, U.S. efficiency started forty years or so ago, whereas Ohio's efficiency previous to 2009 is something I'd tell my grandkids about if I ever have any.  This is utility program efficiency only.  The Federal Appliance Standards adds about 40% more, over a much different timeframe.

I want to make the political point because I'm tired of seeing Republicans disrupt the most important economic development in global history, and I want to see how many people I can get saying the same things before the election is over.  Sure, timing could have been better, but it is what it is.