Planet earth is not getting the climate change results planned or paid for and the needed changes are not complex. The science now is far better than the planning and that should be changed as soon as possible. I do not see a single country with a well designed and implemented climate change plan. The primary problem with current company, state, country, or global climate change plans is that they are not long term cost/benefit results based plans.

There are good goals that have set. For example US President Joe Biden recently announced a goal to achieve a 50-52% reduction from 2005 levels in economy-wide net greenhouse gas pollution by 2030. Now we need the most cost effective plan to assure we make that goal a reality. The current United States plan is very disjointed and not cost effective. I would like to suggest we focus on two facets that would make a big difference in achieving that goal and to see better and quicker results.

Do first things first! We have heard for many years that as a country and planet we should “Reduce Before You Produce”. This was also pointed out with the negawatt concept. The cost of reducing a watt of energy use is lower than the cost of producing the watt. Imagine you are planning to get a solar array for your home. First do everything you can to reduce your power usage then right size your renewal energy.  Look at this graph: 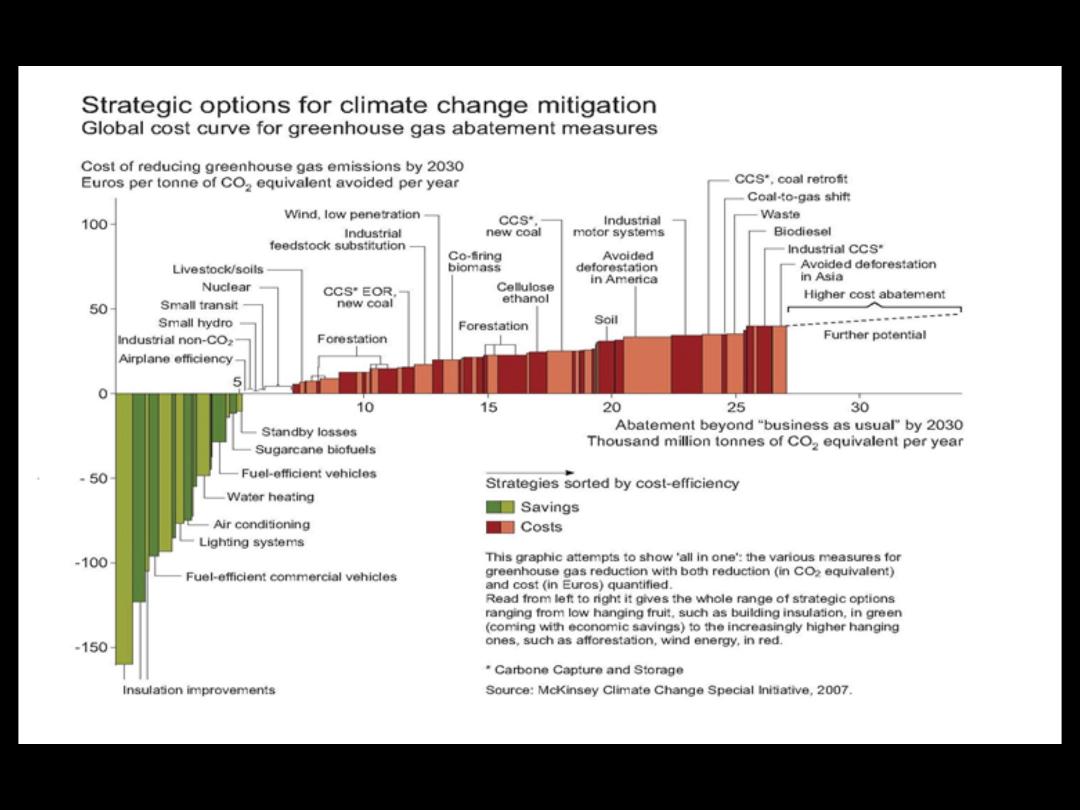 This is a global cost curve evaluating greenhouse gas abatement measures. The very best measure is insulation improvements at an over 150% payback! This should be the first and most utilized measure for energy demand and carbon emission reduction. Now there is a great retrofit option to insulate glazing on buildings and homes where most of the energy is lost through heat gain, heat loss, and infiltration. Today’s insulation improvements will quickly pay for themselves then fund more insulation improvements!

The second measure is also very effective and underutilized. “Tropical forests are incredibly effective at storing carbon, providing at least a third of the mitigation action needed to prevent the worst climate change scenarios. Yet nature-based solutions receive only 3% of all climate funding. Restoring degraded forests could create as many as 39 jobs per million dollars spent — that's a job-creation rate more than six times higher than the oil and gas industry.”

Currently there are far more renewable energy rebate programs being enacted than energy demand/carbon emission reduction or nature based carbon storage rebate programs. Maximize energy demand reduction and carbon storage programs, then maximize renewable energy programs and we can meet or exceed goals sooner. Look at the options and make the plans based upon maximizing sustainability first for better results.

“Tropical forests are incredibly effective at storing carbon, providing at least a third of the mitigation action needed to prevent the worst climate change scenarios. Yet nature-based solutions receive only 3% of all climate funding.

Why do you think this gets so underfunded and underdiscussed? Is it simply a matter of where the money is and where the forests are and maybe them not being in alignment?

Where the "climate change funding" goes is mostly politics. Nature based and demand reduction programs have the most potential and long term benefits and should be a key first step because it reduces the growth rate of "the problem".  The US and the world can do a much better job on effective climate change programs with more science and planning and less politics.

As an old Biophysicist, I have a very long history of introducing now popular "climate" ideas in the 1980s and early 90s to a very Democrat state (Minnesota), and barely surviving to reluctantly tell the story.

In 1987 I wrote a proposal to recycle massive amounts of plastic to mass produce "livestock septic tanks." I never heard of climate change, only that mountains of waste plastic plus mountains of cow manure deserved each other for many reasons. Today they call them "manure digesters." At the same time I pushed expanding hay crop farming (with some tricks) for black dirt, water, etc., etc. Good luck finding your new future farmland. The absolute rape of nature is frightening to an old nature lover.

My wife found a "luna moth" among today's many, many natural wonders.

Dennis - I love your thoughts here.  I think we tend to focus on the new shiny object - renewable energy - and forgot other avenues that still have some major benefits like Energy Efficiency Programs. I am curious if you have seen some specific programs in place that seem to be successful?

Hi Audra,   Thank you for asking. Yes, we have had several successful programs. The US military has a program wherein building managers are mandated to reduce the energy demand on an annual basis. We have helped a number of them do this while improving the comfort levels of thier buildings. This picture is from Lackland Air Force Base Officers Club. The glazing in front of the plant are insulated dramaticlly reducing heat gain, heat loss, and infiltration. It makes the windows perform like walls! It is great for high rise buildings and it won a green building award in Hong Kong!

Thanks for sharing the outstanding writeups. Your core focus  “Reduce Before You Produce” is very practical approach and should be adapted worldwide to mitigate "Climate Change" issue.