IEA: Tripling the Speed of Efficiency Progress a Must for a Net-Zero Carbon World

By taking unprecedented action that transforms how energy is produced, transported, and used, the world can eliminate net emissions of carbon dioxide by 2050, according to a report released today by the International Energy Agency (IEA). The report makes clear that this goal will require rapid scaling of energy efficiency, renewable energy, and electrification.

“The scale and speed of the efforts demanded by this critical and formidable goal—our best chance of tackling climate change and limiting global warming to 1.5 °C—make this perhaps the greatest challenge humankind has ever faced,” said Fatih Birol, IEA’s executive director, in unveiling the findings. IEA called the 227-page report, for which I served as a peer reviewer, the world’s first comprehensive study of how to transition to a net-zero energy system by 2050.

IEA’s report emphasizes that for the world to decarbonize, a major global push to increase energy efficiency is “essential.” The result of this push would be a global rate of efficiency improvements averaging 4% per year through 2030—about three times the average over the last two decades. In addition, electrification and behavior change can further reduce energy demand, as shown in this figure: 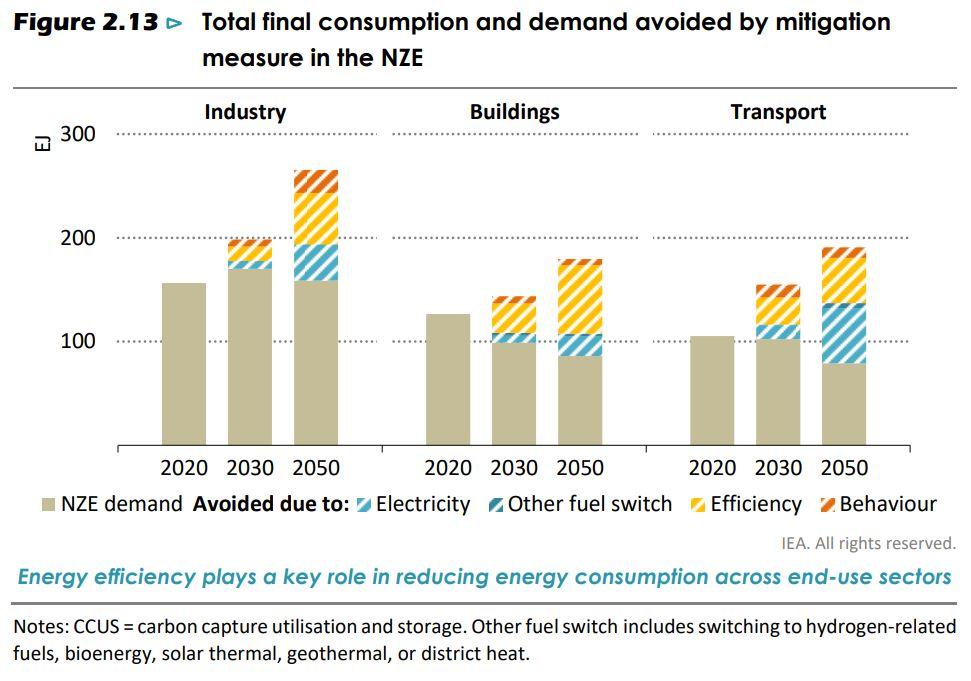 Most of the global reductions in CO2 emissions between now and 2030 in the net-zero pathway come from technologies readily available today, including energy efficiency, solar, and wind. But this decade will also be important for researching and beginning to scale deployments of electrification; hydrogen; carbon capture, utilization, and storage (CCUS); and reduced use of carbon-intensive products. In the 2030s and 2040s, efficiency and renewable energy efforts need to continue, with the use of hydrogen, CCUS, behavior change, and changes in product mix accelerating: 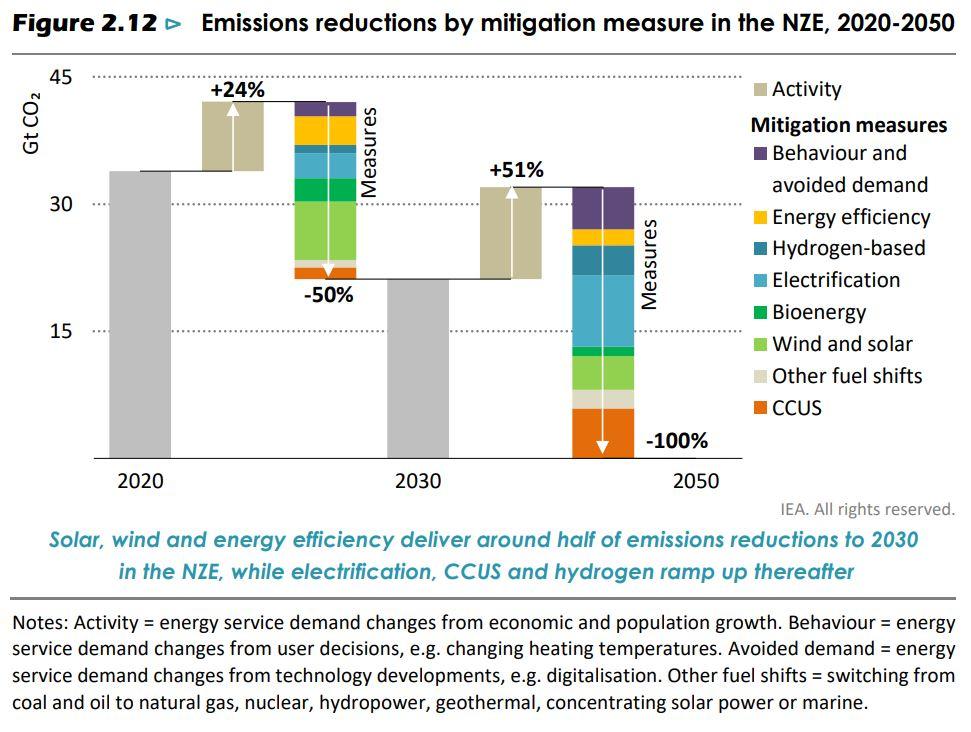 Emissions reductions by mitigation measure in the IEA net-zero scenario.

According to IEA’s scenario, by 2050, almost half of the emissions reductions will come from technologies that are now only at the demonstration or prototype phase. “This demands that governments quickly increase and reprioritize their spending on research and development—as well as on demonstrating and deploying clean energy technologies—putting them at the core of energy and climate policy,” IEA said in its press release. “Progress in the areas of advanced batteries, electrolyzers for hydrogen, and direct air capture and storage can be particularly impactful.“

IEA outlines the scenario we need to achieve by 2050: “Global energy demand is around 8% smaller than today, but it serves an economy more than twice as big and a population with 2 billion more people. Almost 90% of electricity generation comes from renewable sources, with wind and solar PV together accounting for almost 70%. Most of the remainder comes from nuclear power.”

IEA summarizes key milestones that will be needed to get on the net-zero pathway in the figure below. For 2030, this includes that all new buildings are zero-energy-ready and 60% of new passenger vehicles are electric. By 2035, most appliances, cooling systems, and electric motors need to be best-in-class, and 50% of heavy truck sales must be electric. And in the 2030s and 2040s, the vast majority of existing buildings are retrofitted to be zero-energy-ready. 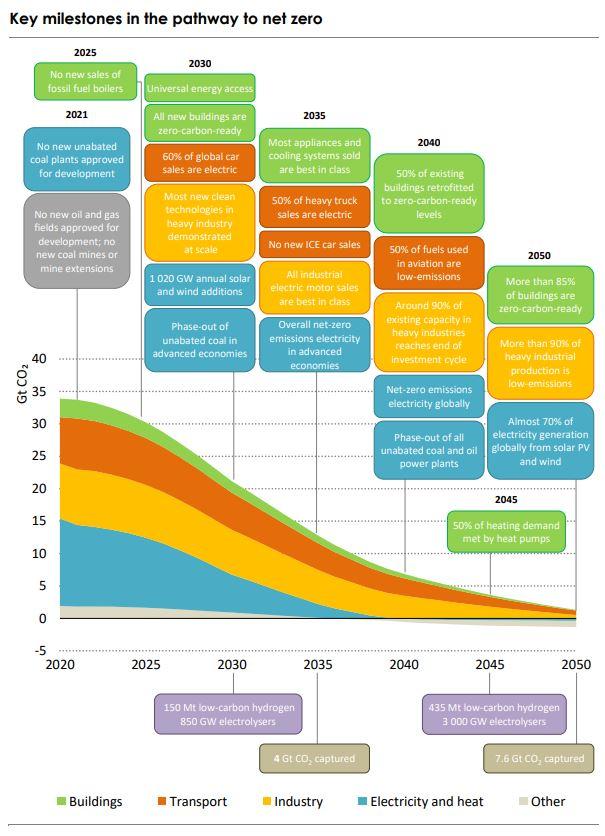 The IEA study is a global one but also illustrates a path forward for the United States. Based on ACEEE’s work on the role of energy efficiency in decarbonization, I believe efficiency can be deployed to a greater degree than IEA shows (our 2019 report found that efficiency can reduce 2050 greenhouse gas emissions in half). The IEA report correctly shows a major role for electrification and significant roles for hydrogen and behavior change. It may, in my view, overemphasize the role of CCUS.

Still, the IEA report is an important milestone, showing a plausible but narrow pathway for getting to decarbonization. But to achieve such a feat, governments, businesses, and households will need to dramatically and quickly scale up their decarbonization efforts.

"Our 2019 report found that efficiency can reduce 2050 greenhouse gas emissions in half."

Of course "your 2019 report" found efficiency can cut GHGs in half. If ACEEE didn't make these wild, inaccurate, unsupportable claims it wouldn't exist.

Truth check: has energy efficiency ever cut emissions in half for anything? Anywhere?

Most of the global reductions in CO2 emissions between now and 2030 in the net-zero pathway come from technologies readily available today, including energy efficiency, solar, and wind. But this decade will also be important for researching and beginning to scale deployments of electrification; hydrogen; carbon capture, utilization, and storage (CCUS); and reduced use of carbon-intensive products. In the 2030s and 2040s, efficiency and renewable energy efforts need to continue, with the use of hydrogen, CCUS, behavior change, and changes in product mix accelerating:

Love seeing these simultaneous messaging-- because we don't yet know what technologies will be the biggest players in the 2030's and beyond doesn't mean we should hesitate to go full pedal to the metal with the tech we have available today. Capture what we can now, worry about the rest later

The renewables industry has been kicking the can down the road for 65 years, Matt. Eventually, you'll recognize that's part of the plan.