Danish Architects’ Prefab Façades Could Cut Building Energy Use in Half 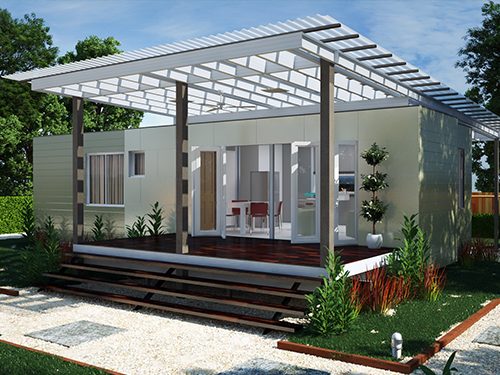 An architectural design collaboration in Denmark is hard at work on a prefab, modular façade that can be quickly installed on an existing building to boost its energy efficiency.

The site lists the Danish Technological Institute and Technical University of Denmark as two of eight partners for a project co-led by storied Copenhagen architecture firm Henning Larsen.

“The world is burning, and all of us in our respective fields need to do something,” project co-lead Martin Vraa Nielsen of Henning Larsen told Fast Company. “If you look at the building industry as a whole, it’s very clear that we, in particular, need to make a change…If we want to make a difference as an industry, it means starting with what already exists, fixing what we already have. We need to be doubling that amount of transformation work we do.”

Buildings “have a giant carbon footprint,” Fast Company explains, in a post amplified by Environmental News Bits. “Generating the power needed to run lights, heat, and air conditioning is responsible for more global emissions than the entire transportation sector. New buildings perform better, but most of the buildings that will exist in 2050—when humanity’s carbon footprint needs to shrink to zero—already exist now. That means each of those buildings will have to be renovated to become more efficient.”

The team’s first focus is on a generation of social housing in Demark that dates back to the mid-20th century and is now due for renovation, writes Fast Company staff reporter Adele Peters.

“The point of departure was this very particular typology of social housing that we have from the 1960s and ’70s: long blocks of housing that, after a half-century of use, are in need of some attention,” Nielsen said. “How can you start to renovate this mass of housing stock in a way that’s both energy efficient, and not deeply disruptive to the residents?”

The concept is based on a system of panels that Peters describes as “a little like the Ikea kitchen of façades, easy to use and scale up,” with a speed of completion that parallels parts of the recent thinking in Canada on mass, deep energy retrofits.

“Depending on the layout, an entire housing block could be renovated in a week,” she explains. “The panels are designed to help cut energy use in half after a simple installation; brackets are embedded in the old walls to support the new panels,” and “perhaps most importantly,” can be installed without asking occupants to vacate the premises while work is under way.

“The panels work by clipping onto the existing structure, so you’re actually not pulling the old walls down, you’re just adding this new outer layer,” Nielsen said. “It adds another layer of insulation to the often not-so-well-insulated structures, thus helping reduce heat loss.”

The system will allow residents to choose from a catalogue of different windows and balconies, can be adapted to housing forms other than social housing, and will likely see a first installation completed this year on the outskirts of Copenhagen, after work was delayed by the pandemic. And like Canadian mass, deep retrofit proponents, Nielsen is already focused on scaling up the concept.

“The first hurdle is to have it completed on a large scale,” Nielsen told Peters. “Only once we’ve done this quite a few times will we really have the product, and more importantly, the process, optimized and fine-tuned. Once we have that done, it will also give us the opportunity to make improvements. Like all of design, it’s an iterative process. This learning process is the most important one, really. It will allow us to improve on our ideas and help others to avoid pitfalls in the process when they take it on. Taking on the carbon footprint of construction isn’t a job for one person, one office, one team—we all need to be part of it.”