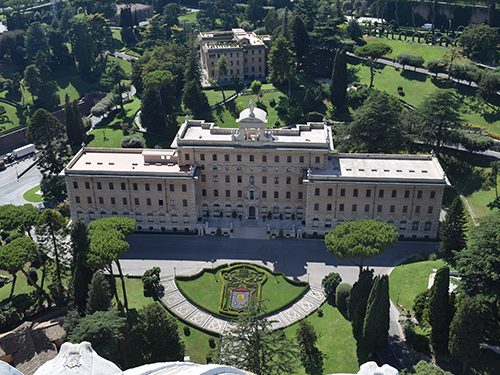 A 26-year-old cartographer, environmentalist, and devout Catholic from Connecticut wants to use digital mapping software to engage the Catholic Church in the cause of environmental justice. And the Pope is impressed.

In her younger years, Molly Burhans contemplated becoming a nun, writes The New Yorker. But as she became more aware of the climate crisis, “she began to think of ways in which the Catholic Church could be mobilized as a global environmental force.”

Realizing the Church was “probably the world’s largest non-state landowner” and had influence over a global congregation of 1.2 billion, Burhans concluded the institution had “the means to address climate issues directly, through better land management, and that it was also capable of protecting populations that were especially vulnerable to the consequences of global warming.”

In fact, she told The New Yorker, its involvement is imperative.

“There is no way that we will address the climate crisis or biodiversity loss in any sort of timely manner if the Catholic Church does not engage, especially with its own lands and property,” she said.

Critical in accelerating Burhans’ commitment to faith-based climate action was Pope Francis’ electrifying 2015 encyclical “Laudato Si’”, which called all Catholics to hearken to the devastating consequences of the sin of trashing the planet.

Describing the letter as “one of the most important documents of the century,” Burhans recalled how startled she was when she realized that, despite her church’s role as a global provider of health care, aid, and education, it has no centralized environmental network.

So that same year she founded GoodLands, and started “to use technology that she had become proficient at in graduate school—the powerful cartographic and data management tools known as geographic information systems (GIS)—to create a land-classification plan that could be used in evaluating and then managing the Church’s global property holdings,” the New Yorker recounts.

Her first step was to document exactly what land and property the Church owned—something virtually no one, from her own parish in Connecticut to the Vatican, had any real grasp of. Invited to visit the Vatican in the summer of 2016, she asked to meet with the cartography department but was told such a department did not exist. So she got their blessing to gather the information herself.

Burhans has so far created the first complete map of the Church’s jurisdictional elements (which do not always pay heed to national or state boundaries), along with mapping that highlights where specific Church lands “would be particularly valuable in any effort to preserve watersheds, habitats, migratory corridors” and other potential conservation assets.

“If Church leaders understood what they controlled,” she said, “they could collaborate with municipalities, government agencies, environmental NGOs and others, in addition to any efforts they might undertake on their own.”

Then, in 2018, Burhans had an audience with Pope Francis himself. She presented him with “a map that showed the percentage of Catholics in every diocese in the world, and explained how that map related to the bigger projects she envisioned.” In response, the Pope offered her a six-month trial term as the head of a brand new Vatican cartography institute—but offered no budget with which to run it, forcing Burhans to decline.

Still, she persevered. She pitched a 10-month trial with a budget of about US$1 million, compiling a 79-page prospectus outlining—with full data and mapping—the goals GIS could support, “among them evangelization, real estate management, papal security, diplomacy, and ongoing efforts to end sexual abuse by priests,” The New Yorker writes.

Just after she submitted her pitch, the pandemic stuck, and everything was put on hold. Burhans contracted COVID-19 herself (and used her experience to create more maps for the public good). Now recovered, she waits for word on her proposal from the Pope.

And while she waits, she works. Today, GoodLands is busy expanding its mission into lay communities of all kinds. “What we do has value for any large property owner who cares about the environment, and in order to scale this work we need to serve everyone,” she said.