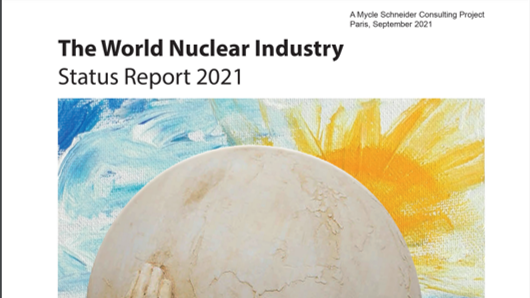 Key conclusions of WNISR2021 include:

a) In 2020, nuclear power generation plunged by un an unprecedented margin (>100 TWh), except for the immediate aftermath of the Fukushima events (2011–12), while operational nuclear capacity has reached a new peak in mid-2021. More capacity, less output.

b) Non-hydro renewables—mainly wind, solar and biomass—out-performed nuclear plants in electricity generation on a global scale. Hydro alone has been generating more power than nuclear for most of the past three decades.

e) Small Modular Reactors (SMRs) get a lot of media coverage, some public money, but are so far unavailable commercially and will not be for another 10–15 years—if ever. Pilot projects in Argentina, China, and Russia have been disappointing.

f) The situation at Fukushima, onsite/offsite, remains unstable. Effects on health and well-being are significant. Cost estimates have risen, currently range from US$223.1 billion (Gov.) to US$322–758 billion (independent). Japanese courts have acquitted Government/TEPCO officials over disaster responsibility but ruled against reactor operation in some cases.

g) Nuclear power demonstrated a high sensibility to the COVID-19 pandemic. A first analysis shows that it has a low resilience against the most common climate change effects. Nuclear’s resilience will likely further decline.

h) There is a real question about the exposure of the nuclear power sector to criminal activities including bribery and corruption, counterfeiting and other falsification, as well as infiltration by organized crime.

Nuclear power demonstrated a high sensibility to the COVID-19 pandemic.

What exactly does this mean? Was it about the availability of the workers or the changing energy demand patterns and how the power source responded to that?

It doesn't mean anything, Matt. It's really as stupid as it sounds.

So Bob - are you saying this is the new normal? Not related to 2020 being a Covid year?

In 2020, nuclear power generation decreased—for the first time since 2012—by over 100 TWh or more than the individual national production of 28 of the 33 nuclear countries.

To be clear, Joe: are you saying COVID-19 is the new normal, that nuclear plant operators are incapable of adapting to challenges and moving forward, that  after responsibly cutting back staff and generation to avoid putting employees at risk, they're throwing in the towel?

Then you would not only be ignoring the >60-year history of nuclear energy, you would just be wrong (2021 U.S. generation through June is up 17%).

But maybe you're unfamiliar with dispatchable energy. You see, unlike solar and wind farms. nuclear operators can control the output of their plants...

To be clear, Joe: are you saying COVID-19 is the new normal

No Bob I am saying that Covid definitely affected Nuclear last year...more so, than any other fuel.  I fully expect there to be a substantial recovery in nuclear generation WW this year as demand recovers.

that nuclear plant operators are incapable of adapting to challenges and moving forward, that  after responsibly cutting back staff and generation to avoid putting employees at risk, they're throwing in the towel?

This is pretty much spot on. Nuclear plant operators do seem to be incapable of adapting to challenges and moving forward.

Then you would not only be ignoring the >60-year history of nuclear energy, you would just be wrong (2021 U.S. generation through June is up 17%).

Huh? where the heck did you get that number?  Net generation in the US YTD is up 2.7%.  Nuclear continues its downward slide - down 12TWh or 2.5% YTD.

"There is a real question about the exposure of the nuclear power sector to criminal activities including bribery and corruption, counterfeiting and other falsification, as well as infiltration by organized crime."

Laurent, I had to laugh when I saw Mycle Schneider was the author of this nonsense financed by fossil-fuel shadow groups "The MacArthur Foundation" and "Natural Resources Defense Council". I read last week MacArthur will be divesting from fossil fuel investments, however, so looks like Schneider just got in under the wire.

He is one of a handful of career antinuclear activists who, for decades, has made a pretty good living by scaring people. He has no training in nuclear energy, physics, radiation biophysics, nor any professional experience whatsoever working in the nuclear industry - anything that might qualify him to be a consultant on the subject, other than a big mouth.

Please do not post "reports" coming from hacks spouting ideologically-motivated garbage. Someone might be tempted to believe it.

Ouch! What a brutal report.

Yet in spite of its lack of popularity, the reasons to support nuclear remain:

- it is the best fit for a deeply decarbonized grid (because the variability of wind and solar favor continued use of fossil gas to fill in the gaps);

- nuclear+hydro remains the only combination that has been used to decarbonize a major grid (e.g. France, Sweden, Switzerland);

- nuclear has the lowest environment footprint;

- it is clean and sustainable.

That countries are choosing to slow down the inevitable fossil fuel phase-out, in the hopes that renewables will eventually allow the deep decarbonization that nuclear demonstrated 30 years ago is very unfortunate.

FYI, the radiation exposure of the general population around Fukushima has been far to low to produce adverse health effect.  There have been 1600 deaths due to misguided and unneeded evacuations however, and dozens more each year due to increased fossil fuel use; in other words, anti-nuclearism kills.

- nuclear+hydro remains the only combination that has been used to decarbonize a major grid (e.g. France, Sweden, Switzerland);

Let's be clear - Sweden is now a hydro/nuclear/wind grid and is moving towards a hydro/wind/nuclear grid.  This will happen before 2030.

The Baltic Sea region has the potential for more than 90 GW of offshore wind power, with Sweden accounting for 20 GW of that, Ørsted said.

Apart from the Skåne project, Ørsted is also developing the Gotland offshore wind farm in Sweden. This project will also have a capacity of up to 1,500 MW. The wind farm is located some ten kilometres southwest of Gotland and covers an area of around 370 square kilometres. This project is undergoing an environmental assessment as well.

Inside a Nuclear War Bunker Built to Save Canada’s Leaders

The Diefenbunker history is not just of global tension but also of Canada’s parsimonious approach to civil defense, optimistic thinking about the apocalypse and Canadians’ antipathy toward anything they perceive as a special deal for their..

The general, summarized world opinion that nuclear energy is green, and based on this, countries are now forming their further development programs.

Is nuclear essential to achieving our climate goals?

The world has turned its back on nuclear energy. I think the reasons are more emotional than based on an understanding of the pros and cons of nuclear power. I understand the expense, development time drawbacks, and waste concerns with..