It’s much too early to predict the outcome of the November balloting—but is it too late to be worrying about the Democrats blowing themselves up before they have a chance of blowing the election?

Should Democrats mortally wound themselves during the nominating process and lose to Trump in November, any chance for aggressive federal climate action will be lost for at least the next decade. Moreover, if either of these two events happens, it is likely that progressive climate activists will have played a pivotal role—just as they would play an important part in defeating Donald Trump.

I’ve been repressing a nagging feeling about the 2020 elections for weeks now. It all came rushing to the surface as I happened upon an article that Michigan Representative Rashida Tlaib (D) booed former Secretary of State Clinton during a live Sanders campaign event in Iowa.

For the record, Tlaib was the last boo in line[i]. Before that, the audience rang out its chorus of rebuke in response to a moderator’s question about Clinton’s having said in a recent interview that nobody likes Bernie. Actually, Sanders is the most well-liked senator in the nation, according to a Morning Consult tracking poll.

Joining Tlaib on the panel were Representatives Omar (D-MN) and Jayapal (D-WA). Omar is a member of the Squad—a progressive group of four women of color whom Trump has accused of being un-American and a threat to the nation in tones reminiscent of Joe McCarthy. One other member of the Squad, Ocasio-Cortez (NY), has endorsed Sanders and is also actively campaigning for him. The fourth member, Ayanna Pressley (MA), has endorsed Warren—progressives and Green New Dealers all.

The bond between Sanders and his supporters is powerful—probably as or more so than the one between Trump and his core supporters. If it were not already evident before the boos rang out in Iowa, bygones are not bygones when it comes to the enmity between Clinton and Sanders supporters.

Clinton, as is her want to do, attributed her 2016 defeat to what Sanders didn’t do—unite the party enough—rather than any missteps or character flaws of her own. Ask Bernie Bros why Democrats were divided in the first place. They’ll tell you it was because the party’s establishment rigged the nomination in Clinton’s favor.

Is history repeating itself? Are establishment Democrats so frightened of a Sanders nomination that they are willing to risk an intra-party split—believing that hatred of Trump will leave progressives no choice but to support the nominee whomever he or she may be? If that’s the case, it’s one helluva gamble and may ultimately create an unbridgeable rift.

Perez was the establishment candidate for DNC Chair. He was also opposed to dedicating an entire debate to climate change. Progressives wanted Keith Ellison, the current Minnesota Attorney General. At the time, he was a Minnesota Congressman. Representative Ilhan Omar (D-MN) now occupies the seat Ellison held before being elected Attorney General.

As Daniel Boguslaw writes in The New Republic:

…this particular convention roster is stacked with a uniquely egregious assortment of corporate lobbyists and vocal opponents to progressive policies. One featured player is centrist darling and top-dollar buckraker John Podesta, famously quoted in a leaked email as being “not opposed” to “grinding [Bernie] Sanders to a pulp.”

Podesta is now a member of the rules committee that’s chaired by Maria Cardona and Barney Frank. Cardona is a leading K Street lobbyist. Frank, a former Massachusetts Congressman, is on record calling the Green New Deal (GND) “a loser.” He’s not too fond of Medicare for All (M4All) either as it turns out.

The Sanders campaign unsuccessfully sought to have Frank removed from the rules committee in 2016, describing him as an “aggressive attack surrogate for the Clinton campaign.” Nina Turner, president of the Sanders-affiliated Our Revolution and co-chair of the Senator’s 2020 campaign, said the DNC should be ashamed of itself.

Turner was straightforward in her warning: If the DNC believes it’s going to get away in 2020 with what it did in 2016, it has another thing coming. Why Turner and other Sanders supporters are quick to react is not overly difficult to understand. If there were ever two committees that might be thought capable of rigging a national convention, credentials and rules would certainly be high on the list of probable suspects.

Just days before the Iowa caucus, the DNC announced new qualifying rules for the debate that will be held in Las Vegas shortly before the Nevada primary. The new requirements open the door to Mayor Bloomberg securing a place at the podium. Although Bloomberg’s path to the nomination is difficult to delineate, he is considered an establishment fallback to Biden.

The rule change allows a candidate to meet one of two criteria—either a delegate threshold of at least one pledged vote from the Iowa caucuses or the New Hampshire primary, or showing ten percent support in at least four national polls or surveys of South Carolina and Nevada between January 15th and February 18th.

Bloomberg is not a candidate in any of the four early primaries—having chosen instead to hold off competing head-to-head until the Super Tuesday states on March 3rd. The new rules, however, could prevent candidates like Yang and Steyer from participating in the Las Vegas debates. Steyer expressed the shared sentiments of many:

The Democratic Party should be doing everything possible to ensure a diverse field of candidates. Instead, they are changing the rules for a candidate who is ignoring early states’ voters and grassroots donors.

I’m not being accusatory here, nor am I defending what the DNC did. This is about what Sanders’ supporters might be feeling.

My sudden shutter at the thought of what could happen between now and November to the Democratic Party is based on more than the current sniping and in-fighting over who sits on critical committees. There are easy enough ways and time to fix those problems. That’s assuming, of course, that the Democratic establishment doesn’t get so nervous over a potential Sanders candidacy that they precipitously do something everyone will be sorry for on the morning of November 4, 2020.

The one 2020 political prediction I can make with complete confidence is that establishment Democrats are going to get very nervous before this is all over. Sanders and Warren are the only remaining candidates with a chance of securing the nomination that Green New Dealers like the Sunrise Movement and Justice Democrats feel comfortable supporting.

Youth movement organizations have burst on the political scene since victories by Ocasio-Cortez and other progressive challengers to Democratic and Republican incumbents in the midterms. Environmental justice is at the top of these organizations’ priority lists. Moreover, they have a clear vision of the future they want and blame establishment politicians for having failed younger generations.

Data for Progress, a progressive think tank, ranks Warren and Sanders ahead of Biden on the Green New Deal. (Figure 1) The scores below each of the candidates are 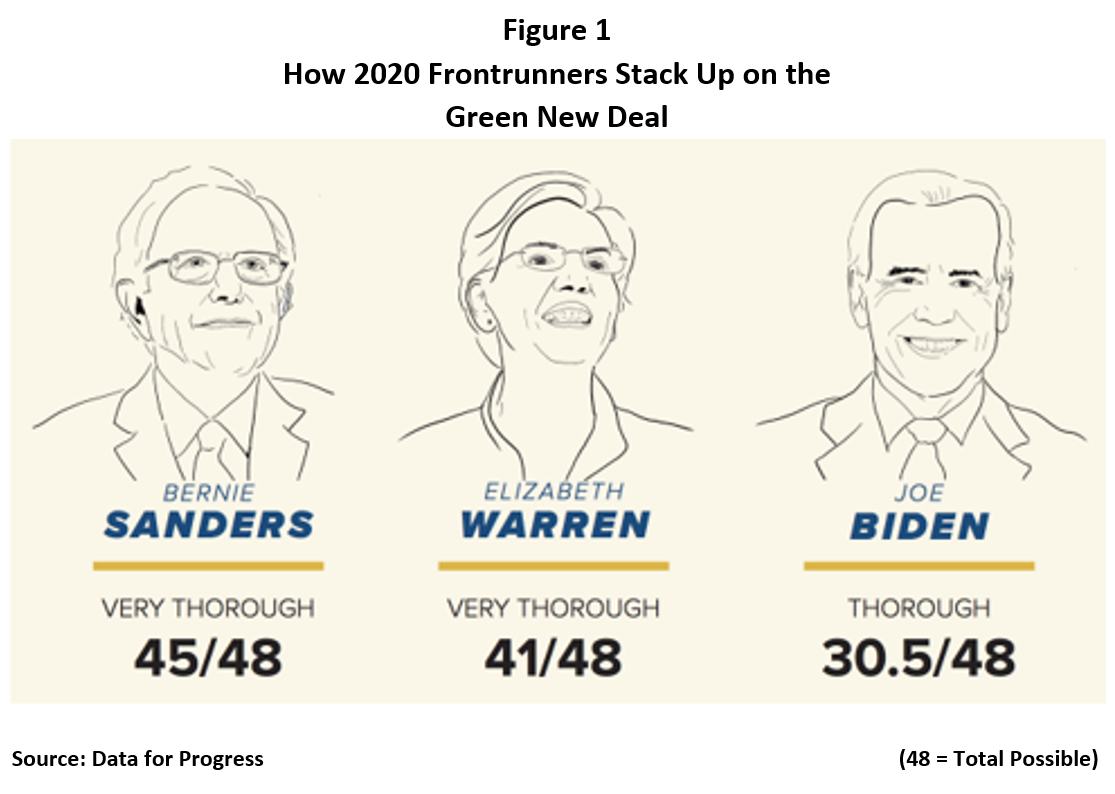 based on a set of 48 components of the GND. Sanders and Warren score higher than Biden because their climate plans emphasize social safetynet programs, environmental justice (EJ) issues, and indigenous rights, while Biden’s climate plan makes fewer linkages between climate change and social issues.

Sanders has much closer ties to the climate youth movement than any of the candidates. Moreover, his supporters appear much less likely willing to vote for a second choice in the election should the Senator come up short in the balloting.

Supporters of the three candidates show divergent tendencies when it comes to the November election. Asked if they would support the Democratic nominee should their candidate not get the nod, 53 percent of Bernie Bros said yes. Another 31 percent thought it would depend upon who the nominee ended up being.

To put this in some perspective, consider the narrow margins of victory that divided Clinton and Trump in 2016. According to the 2016 National Popular Vote Tracker, the election was decided by a total of 77,744 votes across three states—Michigan (10,704), Wisconsin (22,748), and Pennsylvania (44,292).

Given the very real possibility that razor-thin margins will determine the outcome of the 2020 election, Democrats cannot afford progressives failing to show up to vote in November. Even worse, the party of FDR will pay the ultimate price should they choose to vote for Trump.

What’s that? Impossible, you say? According to a study of 50,000 people, as reported by NPR:

Fully 12 percent of people who voted for Sen. Bernie Sanders, I-Vt., in the 2016 Democratic presidential primaries voted for President Trump in the general election.

Figure 2 shows the impact of Sanders-Trump voters in the three pivotal states. Sanders crossovers amounted to four times what Clinton needed to take Michigan and its 16 electoral votes. Together the three states accounted for 46 electoral votes—enough to have denied Trump the presidency.

In Part 2, I will be addressing how Democratic progressives and establishment moderates have been faring on the 2019-2020 campaign trail and in Congress, as well as what might cause an unbridgeable rift between them. The Green New Deal has had a lot to do with it.

[i] Tlaib, after receiving pushback, has since apologized for the boo and has promised to help preserve party unity.