Will the fossil era end with a bang or whimper?

In his book “Eaarth” Bill McKibben quotes Paul Roberts, "the existing fossil fuel infrastructure, from power plants and supertankers to oil furnaces and SUVs," is worth at least $10 trillion, and scheduled to operate anywhere from ten to fifty more years before its capital costs can be paid off. If we shut it down early, merely to save the planet, someone will have to eat that cost. Given such a "serious asset inertia," no owner or investor in a power plant is likely to accept the write-down without a "nasty political fight."

Shutting some of this infrastructure early however is the recommendation of the authors of the paper Committed emissions from existing energy infrastructure jeopardize 1.5 °C climate target recently published in the journal Nature.

Banking on Climate Change 2019: Fossil Fuel Finance Report Card, however, by Oil Change International, says added up, lending and underwriting by 33 global banks to the fossil fuel industry since the Paris Agreement was adopted in 2016 has amounted to $1.9 trillion, with financing rising every year.

Moody’s Analytics estimated in a Washington Post article that the impact of such investments to the global economy could be up to $69 trillion by the end of this century if global warming hits 2 degree Celsius and “only” $54 trillion if warming is limited to 1.5 degrees Celsius.

Climate change will create winners and losers in the economic race according to the following graphic from the Moody’s report sourced from the World Bank. 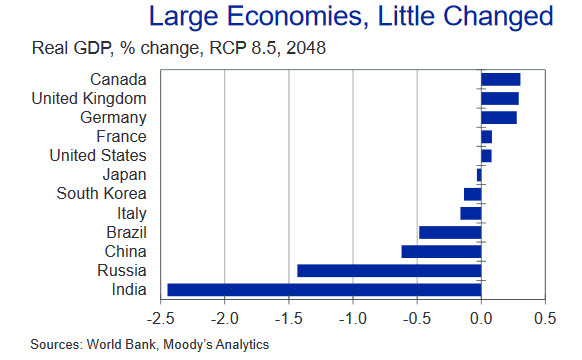 One of the losing companies in this race has been General Electric Company (GE) as reflected by the following chart of the company’s stock price on the New York Stock Exchange over the past half century. 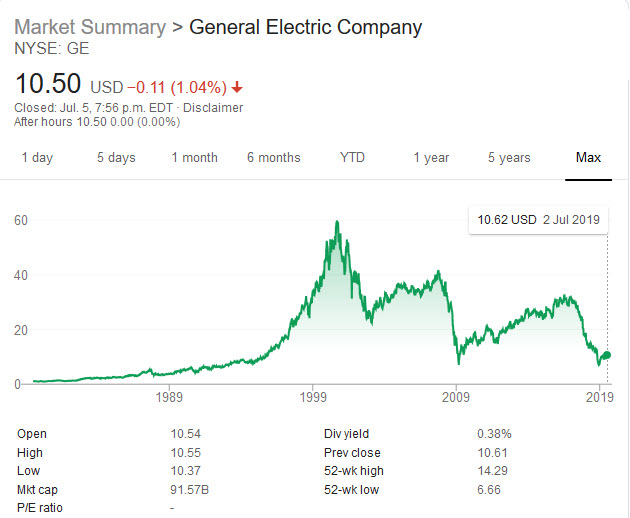 GE used to be one of elite "widow-and-orphan stocks", a term coined in the 30s to describe mature companies with fat dividends and entrenched market positions.

That 111-year span ended about a year ago.

From a peak market capitalization of almost $594 billion, its capital sank to about $50 billion by early 2009 recovered somewhat and then collapsed again to about $92 billion today for a loss of close to half a trillion dollars.

It is an American multinational conglomerate operating in aviation, healthcare, power, renewable energy, digital industry, additive manufacturing, venture capital and finance, lighting, and oil and gas but most of its woes have emanated from the energy sector.

In 2017 it also acquired a 62.5% stake in Baker Hughes for about $30 billion to increase its oil & gas operations but only a year later was negotiating to raise $4 billion by selling a chunk of Baker Hughes and planned to unload its entire stake before mid-2019.

Though major market indices have achieved an average annual growth of 11% over the last 8 years, GE stocks have declined in value at an average rate of 8.5%.

As Fortune noted, GE doubled down on fossil-fuel-fired turbines just as renewables were becoming cost competitive with the result global demand for GE Power’s products collapsed, while GE had bet heavily the other way. The profits of its power segment plunged 45%.

Last week, GE announced it would close a California gas plant 20 years ahead of schedule due to economic factors and the state’s clean energy goals and commitment to using renewable energy. Eco-business.com says the closure is not just a hiccup in GE’s energy plans but is just one small piece of the American giant’s substantial stumble on clean energy in recent years. And Kathy Hipple, a financial analyst at the Institute for Energy Economics and Financial Analysis, says “every company on the planet will be impacted by climate risk.”

In essence, GE is the dying canary in the (fossil fuel) coal mine and the above Moody’s graphic above notwithstanding, the countries like Canada and the United States that are banking on LNG as their economic and energy lifeline are in for a rude awakening per the following tables from the paper  The New Gas Boom Tracking Global LNG Infrastructure, which shows a striking mismatch between the Export and Import capacity of LNG of the majors markets.

And that delusion is being perpetuated by the Canadian federal government, which has recently announced it intends to seek credit toward Canada’s emissions reduction targets for the greenhouse gas reducing effects of the LNG its intends to export per the policy paper No, Canada cannot get credit for its low-carbon exports.

The global GHG accounting system used by the United Nations Framework Convention on Climate Change doesn’t work that way. Nor should it.

Why should Canada or any other nations get credit for simply shifting the emission burden away from itself onto another country. Especially when the receiving nation will likely be already burdened by the effects of climate change per the Moody’s assessment above.

Serious nations, companies, and individuals have had enough of these kinds of shenanigans as witness the divestment, deinsurance and youth climate movements.

It will be a “nasty political fight” but ultimately $10 billion in infrastructure pales in comparison to and will lose to $69 trillion in cumulative impacts due to climate change.

So, whether or not the fossil fuel era ends with a bang or a whimper, there are going be a lot of tears and fortunes shed along the way, but hopefully not too many.

In the normal course of events, creative destruction would be the best response to fossil fuels, but $10 trillion of asset inertia is a large obstacle to overcome.

It remains to be seen whether or not it is up to the challenge and opportunity of the century?

It will be a “nasty political fight” but ultimately $10 billion in infrastructure pales in comparison to and will lose to $69 trillion in cumulative impacts due to climate change.

Appreciate this in particular. I don't think there will be a sudden overnight 'death' of the fossil industries, as those stranded assets will still play a huge role. Coal is declining steadily, but it'll certainly be a more drawn out process for the rest of the industry who aren't nearly as bad as coal for emissions. But if you look at it from the economic perspective, you need to include the costs of inaction-- which are mindboggling