Will Cheap Gas at the Pump Stall Progress on Car Emissions?

Research Professor at the University of Michigan Energy Institute.

Retail gasoline prices are now as low as they were in the “roaring ‘90s.” The 1990s, that is, when the energy crisis of the 1970s had faded from American consumers’ memories, the economy was strong and the market share of sport utility vehicles (SUVs) had more than tripled over the decade.

As in the 1990s, low-cost gasoline is changing consumers’ habits, encouraging them to drive more and purchase less fuel-efficient vehicles. What’s different now is that U.S. automakers face far more stringent fuel-economy standards. The rules, which require automakers to have a fleet-wide, on-road average of roughly 40 miles per gallon by 2025, are the country’s primary policy for reducing carbon dioxide (CO₂) emissions from motor vehicles.

However, fuel prices have plummeted since these rules were put in place. What does cheap gasoline mean for the country’s progress in reducing emissions?

To answer this question, we need to look at the interplay between gas prices and consumer behavior. We also need to consider the impact that technology and policy can have – and cannot have – on reducing emissions from motor vehicles.

When pump prices are high, consumers are motivated to drive less and choose fuel-efficient vehicles. As prices moderate, there is a weaker financial motive to economize on gas, making emissions reduction more difficult. This puts a greater burden on policy to sustain progress in spite of consumer disinterest.

Petroleum is the largest source of CO₂ emissions in the United States and, after coal, the second largest globally. Petroleum use is driven by demand for motor fuels, of which cars and personal light trucks consume the largest share. Because a car’s CO₂ emissions are directly linked to its fuel economy, any gain in fuel efficiency results in lower CO₂.

For example, an SUV that gets 20 mpg emits 5.3 metric tons of CO₂ during a typical 12,000 miles per year of driving, while a 30 mpg sedan emits 3.6 tons to cover the same distance.

For over a year now, the national average fuel price has been much lower than the roughly US$3.50 per gallon average of the previous few years, let alone the brief spike to over $4.00 per gallon in summer 2008.

The University of Michigan Energy Survey’s affordability index earlier this year found that consumers feel gasoline is twice as affordable as it was before oil prices began sliding in mid-2014.

It’s no surprise, then, that new vehicle sales are at a record high while the sales mix has shifted away from compact segments and back to trucks, larger SUVs and more luxurious cars. The amount of driving is up again as well.

Been down this road before

We’ve seen this situation before when the energy crisis of a generation ago gave way to a resumption of consumption after oil prices tumbled in 1986.

The adjoining graph compares the average fuel economy of new cars and light trucks to the nominal (“dollars of the day”) and real (inflated to 2015 dollars) price of gasoline since 1970. As the graph shows, fuel economy ratchets up as fuel prices rise. Conversely, low and stable fuel prices can cause fuel economy to backslide, which occurred from the late 1980s until a decade ago. 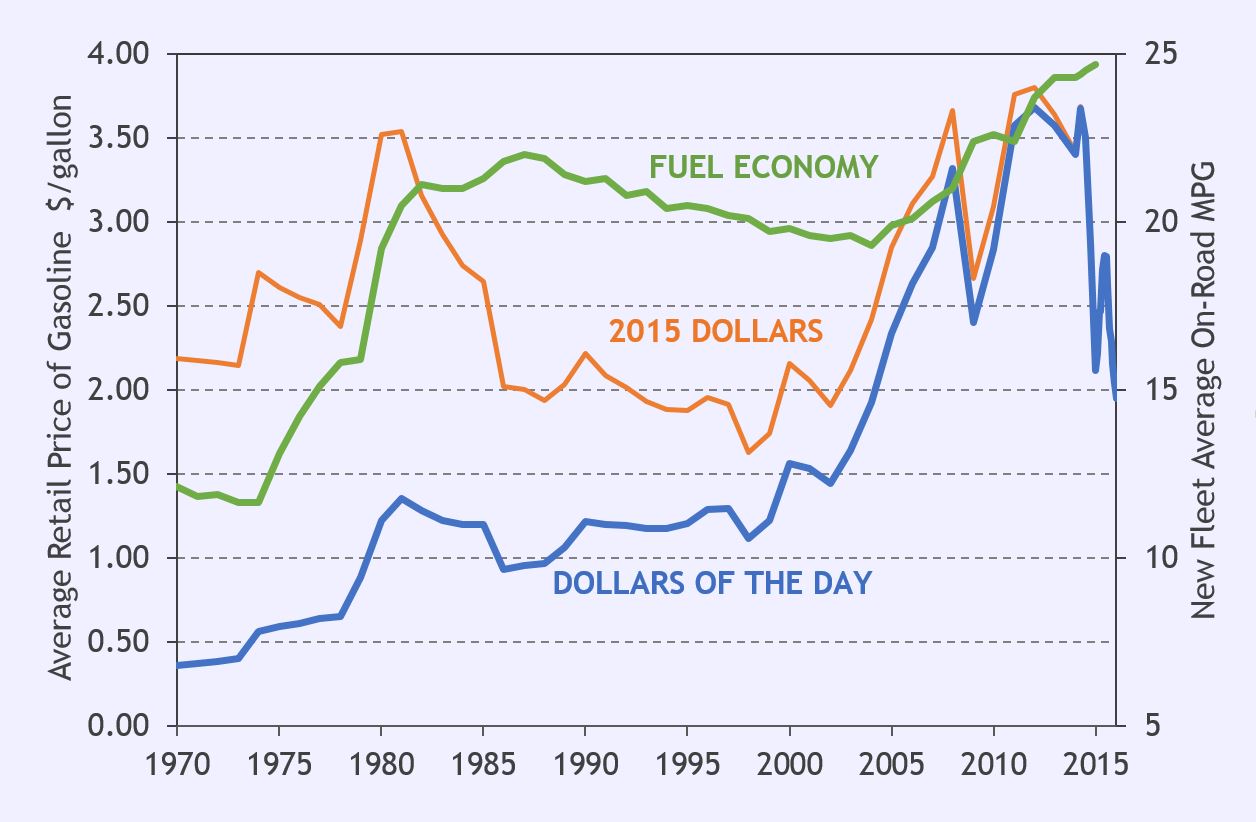 During the 1990s, overall vehicle efficiency eroded as consumer tastes and automaker sales strategies fostered a shift to light trucks (vans, SUVs and pickups), which are regulated more leniently than the cars (sedans, coupes and station wagons) they displaced.

A similar shift is again under way now, reflecting the tension between consumer buying habits and the need to cut carbon.

The relation between technology and efficiency, meanwhile, is more subtle than it might seem to observers outside the industry.

The graph seems to suggest that technological progress for better fuel efficiency happened in spurts triggered by periods of rising fuel price.

In fact, as measured by engineering metrics, the rate of technology change has been remarkably steady throughout this whole time period from the 1970s to date, as documented in a paper I coauthored a decade ago and confirmed more recently by colleagues from MIT. That is to say, automakers are continually improving the engineering of vehicles whether or not the improvements are used to raise fuel economy.

In other words, regardless of the fuel price situation, there is always a latent potential to improve efficiency as vehicles are routinely redesigned and new models are introduced. But the extent to which the potential is realized depends on the priority given to higher fuel economy relative to other features customers value and automakers can readily sell.

This means that modest changes in how much consumers prioritize fuel efficiency can significantly affect CO₂ emissions, for either better or worse. If millions of consumers choose a larger or smaller vehicle, or select a higher or lower horsepower engine, it will have a far greater impact than a small niche of eco-minded consumers who purchase battery-electric or hydrogen vehicles.

Plugging in versus pumping up

In an interview about recent auto market trends, U.S. Secretary of Energy Ernest Moniz conceded that electric vehicle (EV) sales were well behind the Administration’s goal of putting a million plug-in cars on the road by last year. Moniz seemed unconcerned about the shift back to SUVs and instead emphasized the importance of a “long-term view.”

How do slowing sales of EVs, due at least in part to cheap gasoline, affect emissions?

Plug-in electric vehicles are cleaner, but because volumes are relatively low, their impact on emissions reductions is much lower than any gains in the giant gasoline-engine market. It is instructive to compare the effect of mainstream market shifts to the sales of EVs such as the Nissan Leaf (a battery-only car) or Chevy Volt (a plug-in hybrid with a small gasoline engine to extend its range). The EV market got a boost in 2008, which saw the launch of the high-profile Tesla Roadster along with spiking oil prices.

Bolstered by tax credits and other generous subsidies, plug-in car sales grew rapidly and there are now over two dozen models available that charge from the electric grid for some or all of their energy. EV sales reached just over 122,000 by 2014, but have since fallen in the face of lower fuel prices, dropping to 116,000 in 2015 even as overall auto sales hit a new high.

EVs directly emit no CO₂ when running on battery power alone. Accounting for power plant emissions but recognizing that most EV sales have occurred in California and other states with cleaner-than-average electric grids, the typical electric car emits only about one-fourth of the CO₂ of a similarly sized gasoline car.

Based on that assumption and sales data, I estimate that the new EVs sold in 2015 cut CO₂ emissions by roughly 0.26 million metric tons per year.

On the other hand, the market share of vehicles that EPA classifies as light trucks for regulatory purposes rose from 33 percent to 40 percent over the past six years. That seven-point shift from relatively efficient cars to less efficient light trucks implies a CO₂ emissions increase of 1.76 million metric tons per year, more than six times the emissions reduction from EVs.

In other words, waning interest in fuel economy across the mainstream market slows climate progress much more than lagging sales of electric cars.

Are we promoting the right thing?

Unfortunately, efforts to promote more fuel-efficient vehicles across the entire market are not nearly as robust as the social marketing, to say nothing of monetary incentives, directed at the electric and other alternative fuel niches.

A 2013 study published by the National Academy of Sciences (for which I was a committee member) concluded that even for several decades ahead, the most substantial and lowest-cost ways to cut automobile CO₂ emissions will still be ongoing improvements of gasoline vehicles. The study also found that even with good progress in battery technology, it will not be feasible to electrify most SUVs and other light trucks, which emit a disproportionate amount of CO₂. Trying to run larger vehicles from a battery results in a vicious cycle of heavier weight and higher costs that would render the resulting vehicle both impractical and exorbitantly expensive.

Automakers are regulated by a combination of Corporate Average Fuel Economy (CAFE) standards and greenhouse gas (GHG) emissions standards, which, relative to the 2015 level, target a further 40 percent cut in the new fleet-average CO₂ emissions rate of both cars and light trucks by 2025. A National Academy study published last year found that ample technology is available to meet the 2025 target.

As these regulations come up for review next year, the greater challenge will be weak consumer interest in efficiency, which makes it more profitable for automakers to offer still higher horsepower, larger vehicles and other features that trade off against fuel economy.

The question, then, is whether ways can be found to bolster consumer interest in fuel economy for environmental rather than economic reasons, so that progress can be maintained even when fuel prices are low.

Indeed, the misalignment between consumer interest and the need for ongoing efficiency gains may only grow in the years ahead. Periods of high oil prices are likely to be transient for the foreseeable future if not indefinitely. This situation will require new approaches by policymakers, automakers and environmental advocates, as well as creative social science research.

Successfully confronting the social challenge of encouraging consumers to prioritize fuel efficiency – across the broad market of gasoline-powered personal vehicles – will open the door to greater progress on the car part of the climate challenge than can be achieved through technology alone.