Why Trees Are An Ideal Source Of Renewable Power

One of the more controversial renewable energy resources is woody biomass, such as trees. It shouldn’t be, because biomass can be a highly sustainable resource, if it is properly managed.

I lived in Hawaii for five years, where I worked for a company that managed forests (among other things). I was sometimes asked to give talks at the local high school about energy and sustainability. During one talk, a student said “I heard you were going to cut down all the trees.”

At that moment, I realized that her view of forestry was much the same as my own view of forestry while growing up in Weyerhaeuser country in Oklahoma. Back then I viewed foresters as people who cut down trees, and I associated them with clearcutting.

My views have changed a lot since then, because I have a better understanding of what foresters do. Foresters manage forests. With a managed forest, sometimes that means you harvest the trees like you would harvest any other crop. But managing a forest also entails replacing what you cut down.

Trees are different. During the first 10 years or so of their lives, they generate biomass at the rate of 7-10 bone-dry tons per acre per year. You may see some other biomass sources that claim yields that high, but those were almost certainly achieved with fertilizer and plenty of water.

But there is an even more compelling reason to utilize trees. Unlike most of the short-rotation crops that are sometimes discussed as feedstock for fuel production, trees can actually improve the quality and health of the soil.

What happens is that trees can bring up nutrients from the subsoil and concentrate them in the leaves and bark. This ends up falling back to the soil and adding to the organic material in the soil. Depending on the type of tree you use, managed forests can provide fuel while improving soil quality.

Of course, a key question is the carbon footprint of using trees for fuel. Trees that are combusted for power release carbon dioxide that was recently sequestered by the tree.

In reality, there are additional factors that impact the carbon balance of wood-to-energy schemes. Tree roots, for example, sequester additional carbon below the soil. In some cases, those roots can last for decades, tying up carbon beyond what was in the usable part of the tree.

On the other side of the equation are any energy inputs it took to grow, transport, and convert the tree into a usable form, like pellets. However, a life cycle analysis (LCA) can sort out the various inputs and outputs and calculate a carbon footprint.

How Trees Stack Up

Fortunately, this has been done. Enviva Inc. is a publicly traded Maryland-based company, and the world’s largest producer of sustainable wood pellets. These pellets are primarily used to displace coal in European coal-fired power plants.

In 2019, one of Enviva’s largest shareholders asked independent research firm Boundless Impact Research and Analytics to review the sustainability and carbon impact of wood pellet energy. Boundless used current peer-reviewed literature on the greenhouse gas (GHG) impacts of wood pellets to create an LCA of GHG emissions from the wood pellet supply chain. They compared the carbon footprint of wood pellets to other fuels like coal and natural gas.

The report is available here, but there were a number of important findings. Notably, the report highlighted that wood-based bioenergy can complement intermittent resources like wind and solar power with firm energy. This is often done today with fast-cycling natural gas power plants, but wood pellets can achieve this at a fraction of the carbon footprint. 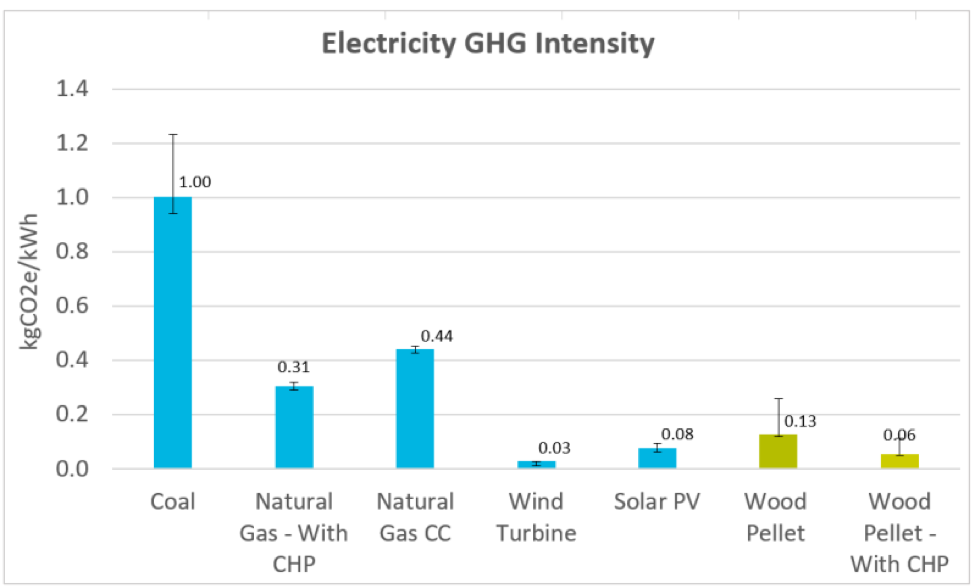 But electricity produced from sustainable wood pellets had a carbon intensity of only 0.13 kgCO2e/kWh – 87% lower than coal and 70% lower than natural gas for the full life cycle. When used in a combined heat and power (CHP) application, the carbon footprint for wood pellets dropped to 0.06 kgCO2e/kWh.

These factors were a major driver behind the European Commission’s 2020 climate and energy plan. Because it recognized that bioenergy could be sustainable and help Europe meet its carbon emissions targets, this plan helped create a booming wood pellet trade by companies like Enviva into Europe.

So, trees can be an ideal source of renewable energy if they are properly managed. Besides providing fuel and reducing carbon emissions, they can perform an important function of recycling nutrients from the subsoil to the topsoil. The trees that are cut down can be replanted. This is distinctly different from – and should not be confused with – using trees from rainforests or old growth forests.

Dear Mr Rapier, There is a tectonic barrier to ipso facto supporting biomass. In a world of close to 8 bln, of massive burning for power, per capita power use bears no relationship to the ratio of those of advanced nations in 1950 - emissions are still rising, despite the massive uptake of other energy - then not fitting the source into the jig saw the world of power is, when not even the pieces to be used have reached a threshold status, is the flaw in your point, which seems to be confined to concerns over the healthy treatment of the tree population.  Stay safe, keep well, warmest regards, Graeme T.

You missed a critical reason why biomass makes a great renewable energy source, it's the N2O and CH4 generated from older trees and rotting biomass. Convert the biomass into energy, and though you would generate CO2, you bypass the N2O and CH4.

Trees don't just sequester CO2, they emit CH4 (28X worse than CO2) and N2O (296X worse than CO2) during their growth and during decomposition. It's an illusion that the total global warming gas effect is reduced by just letting trees grow. Numerous studies show the truer emissions. https://www.nature.com/articles/srep23410

Putting trees off limits from harvesting does the OPPOSITE of reducing global warming. Harvesting, before trees start releasing most of the N20 and CH4, makes the most common sense. Here are some references. "After water vapor and carbon dioxide, methane is the most important greenhouse gas. In fact, molecule for molecule, it is a much more potent planet-warmer than CO2. Human sources – most prominently rotting landfills... – have raised atmospheric concentrations by around 250 percent. They are reckoned to be responsible for around a fifth of global warming. But there are many natural sources, too, including microbial activity in wetlands, termites, the guts of ruminants, and, it now turns out, most of the world’s trees."