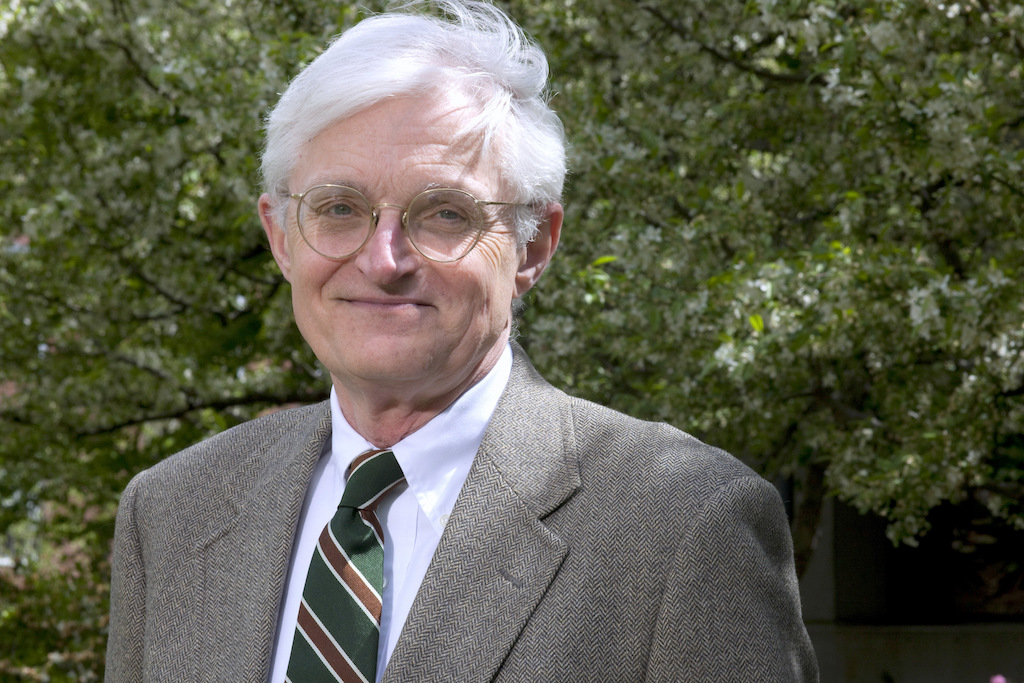 By Joseph Lassiter, with permission.

In June 2016, I gave a TED Talk called We Need Nuclear Power to Solve Climate Change. The talk discussed the world’s realistic options for reducing fossil CO2 emissions soon enough to contain climate change’s more severe effects. To my surprise, that talk has now been viewed more than 1.1 million times.

I have learned a lot from the many, many conversations that have emerged around the talk. Some of these conversations have made me hopeful, but most have made me realize how far we must go to meet society’s urgent need for both more energy and a cleaner environment. Solving either of these problems without solving the other may be a costly outcome, but it is not an informed choice. The world must have much better, low-cost, zero-carbon emission alternatives to meet the world’s urgent need for on-demand, around-the-clock power. And those alternatives need to be available now.

While I am all for renewables, I believe every effort should be made to make nuclear power one of the world’s low-cost alternatives for meeting the urgent demand for power while winning the race with fossil fuels—especially in Asia, where the demand for energy is so pressing and the resulting fossil fuel CO2 emissions are forecast to grow for the foreseeable future, according to the United States Energy Information Association. 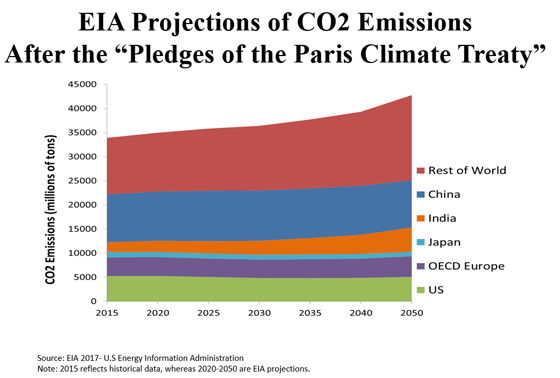 Fossil fuels are winning the race to fill urgent demand for power, especially in Asia. Chart courtesy Joseph Lassiter.I have high hopes for the promising technology category known as “new nuclear,” which offers the potential to dramatically reduce costs and rapidly ramp up installations when compared to today’s nuclear power plants. But the success of new nuclear—and perhaps the future of the planet—requires big, immediate investments from the private sector.

If new nuclear designs are subject to rigorous casualty testing and national licensing, there is no reason to think of nuclear power any differently than we think of other technologies and their use in civil society, such as civil aircraft and aviation or industrial/petro chemical plants and their operations. We finance these industries with private capital, set national and local regulations, encourage competition and discourage cartels in order to lower prices and increase quality (i.e., driving safety up and environmental impact down).

No government official draws up the roadmap for development of these other civil technologies, beyond truly basic research. We let harsh capital markets choose the winners, not government officials—no matter how well-intentioned. No politician seeks public financing for a specific competitor without threat of voter reaction. In short, competition does what it is supposed to do.

We don’t see much competition in military equipment markets, where all too often the result is ballooning costs and stunning program delays. Maybe it has to be that way in the military, but there is no reason it has to be that way in nuclear power, as long as we change rules to allow a new competitive market-based mindset. If we don’t change from the yesterday’s “military equipment” mindset, no new nuclear technology will be competitive with fossil fuels in time. If we change this mindset, we will have the opportunity of making an informed choice about using nuclear technology to meet the energy and climate challenges of the future.

Over the past decade, a number of new ventures have proposed truly novel nuclear designs and have persuaded private investors to fund their path to market. These ventures have drawn up detailed plans to get their designs off the drawing boards, rigorously tested for safety, and ramped up for installation in the countries that want a low-cost, zero fossil carbon alternative for meeting the demand for 24x7x365 power. The ventures that I am watching closely are TerraPower in China, Terrestrial Energy, Moltex Energy and ARC Nuclear in Canada, X-energy, Kairos Power and Oklo in the United States, and ThorCon Power in Indonesia.

Of these, the new nuclear ventures that I find myself rooting for the hardest—and where I have personally invested—are directly taking on the task of beating coal in Asia right now. Asia is where the race with fossil fuels must be won.

TerraPower, whose lead investor is Microsoft founder Bill Gates, and ThorCon Power, whose lead investor is Acadian Asset Management founder Gary Bergstrom, have publically committed to goals on cost (< $0.07/kwh), availability (full-scale demonstration by 2025) and deployment rates (ramping installations toward the 100 GWe/year of new capacity that the world is anticipated to need by 2030, according to the EIA) that are ambitious enough to actually make a difference to the world’s carbon emissions. To appreciate the pace required to beat fossil fuels in Asia, you should look at the updates recently announced by ThorCon Power in Indonesia.

I don’t know which ventures will be the winners and losers in new nuclear’s race with fossil fuels. I do know that action-oriented private investors are fueling this race today. Governments that really need power have begun to follow the lead of these private investors by offering matching funds, setting up demonstration reactor test sites, and facilitating commercial power purchase agreements.

But private investors—not the world’s taxpayers—need to provide the capital, face the risks, and reap the rewards of proving that new nuclear power can be straight-up cost-competitive with fossil fuels without endless public subsidy. If new nuclear’s promise can be proven, one of the world’s greatest commercial opportunities will have been created. Our politicians need to recognize the advantages of “privatizing” nuclear power development as well as letting markets address the uncertainty about when—or even if—fossil carbon emissions will be rationally priced.

So, the race is starting, but to keep up the pace needed to win the race with fossil fuels, new nuclear’s entrepreneurs require ongoing private investment and popular political support.

To you investors out there: Don’t sit on the sidelines. Don’t leave the future up to somebody else. Take a hard look. Pick the ventures you find compelling. Ask how you can help them succeed. Write big checks. The time to invest is now, not when it is too late to win the race with fossil fuels! If you act quickly, the returns can be staggering for all of us. If you act slowly, we all lose.

Hmm, why should private investors invest in something where the return of investment is doubtful, because cost and project duratins are unsure? Coal already stats loosing in the market in Asia, the completion of new coal power stations is shrinkung fast in India and China, and plans for new coal power plants are abandoned in large scales. The times are changing.

With their coming low prices, wind & solar are far more capable to beat fossil off the market. Stronger they already do that in some areas in the world. With their continued price decreases those areas will expand covering nearly the whole world after 2030.

Even when the costs of nuclear shrink towards the stated 7cent/KWh, new nuclear won’t be competitive in 2030 as by then the costs of wind, solar and some storage will be <3cent/KWh.

Investing in new nuclear is a waste as with the same money wind & solar can be expanded 3 times faster and producing 3 times more renewable electricity.

The developments in China demonstrate the future.
While there were no construction starts for new nuclear in the past two years (except a demo project) and nuclear will miss its 2020 expansion target greatly,
production by wind surpassed that of nuclear greatly, and
production by solar already met its quadrupled 2020 target and will surpass nuclear in 2021-2023.

I agree with the commenter that times have changing: Nowadays, the rhetoric of wind and solar is having to meet the reality of on-demand electricity supply.

1) 1-3 GW of fossil fuel power (coal and LNG-fired CCGTs) get installed every week somewhere around the world ..so far we have not seen many promised coal-fired plant retirements associated with the new commissioning, unless local pollution politics demands it.. Fleet capacity factors have simply drifted down, even in China.

2) As the world’s experience in decarbonizaton with solar and wind has increased, it has proven quite difficult to get capacity factors to rise and carbon intensity to fall as rapidly as hoped.

3) French carbon intensity in power generation is something like 66 gCO2/kWh.

4) Meanwhile Germany carbon intensity has flat lined at around 485 gCO2/kWh despite $200B investment in renewable capacity FITs and, through natural gas imports, the Russians still have their geopolitical foot in Germany’s back

5) After making a $200B investment that only a very wealthy, very committed and very technically competent country could make, I wonder what would have happened if Germany just built $200B in NPPs.

5) Your wild high guess wrongly suggests that it’s extremely expensive.
All German govt’s promised that the costs would stay insignificant. And they kept their promise!
So while in first years after the start population support for the Energiewende was ~55% (2003), it gradually increased towards the ~90% now.

Dutch govt just contracted with Vattenfall to construct, operate and decommission after 30yrs, a wind farm of >700MW at a stretch of the N.Sea without any subsidy (it should operate in 2022). Our govt declared that they will ask money for the next offshore concession which we will tender next year (similar as with oil and gas concessions).

3) Your French carbon emission figure is way too low.
Even nuclear alone emits already more! Also shown by other review studies such as by Lenzen. Note that since then the costs of nuclear doubled, so emissions increased also substantial.
Btw. For France important part of the carbon emissions are not counted as e.g. uranium mining, etc. occurs in Africa (Niger, etc).

Sources for France and Germany carbon intensity mentioned in the above coment are here: https://www.sciencedirect.com/science/article/pii/S1361920916307933

Dutch govt just contracted with Vattenfall to construct, operate and decommission after 30yrs, a wind farm of >700MW at a stretch of the N.Sea without any subsidy (it should operate in 2022).

Reality check: the Dutch generated 80% of their electrity with fossil fuels in 2016

The proportion of coal in the Netherlands power generation dropped to 32 percent. In the period between 2011 and 2015, coal’s share increased from 18 percent to 36 percent. The share of natural gas increased to 46 percent.