Why Peter Shumlin will save Vermont Yankee

Vermont Governor-elect Peter Shumlin (right) must have woken up in a cold sweat in the middle of the night over the future of the Vermont Yankee nuclear reactor. 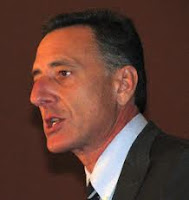 In troubled sleep, the newly elected top state official might have seen the size of the electric bill Vermonters would be paying for replacement fossil power to keep their homes and businesses warm during the state’s long and frigid winters. Like Scrooge in Dickens’ ‘Christmas Tale,” Shumlin might have seen the ghost of future utility bills haunting his political legacy.

Also, he might have seen major employers, like IBM with 6,000 workers, leaving the state and heading for places like Vietnam to make computer chips. The reason is that IBM, and other major employers, won’t be able to compete globally with the loss of $0.06/KwHr electricity and its replacement at double or more of that cost. He will realize the shockingly high price price of replacement power, and its consequences, would be blamed on him.

Also, a closed reactor will become a political and visual eyesore for the rest of his term of office and much longer. The spent fuel isn’t going anywhere and decommissioning could take a decade or longer to complete.

Shumlin’s political opponents will have a field day with both issues.

Right after waking up, Shumlin might have immediately made a ‘wake up call’ to his transition team and ordered them to get him a tour of the plant to begin the process of making peace with the future of the reactor. It appears that’s exactly what happened

Vermont Governor Elect Peter Shumlin visited the Vermont Yankee nuclear power plant this week. He got a tour of the facility and during the visit emphasized the need for Entergy, the utility that owns and operates the reactor, to restart pumping and treating groundwater for radioactive tritium. OK, that’s all well and good even though the tritium isn’t a public health threat to anyone off-site.

The visit raises the significant question of whether Shumlin is softening his tough stance that the plant should not be relicensed by the NRC for another 20 years. On the surface, it appears the answer is no because in an interview with a local TV station, he repeated his call for it to be “retired” in 2012. That’s when the current license runs out.

There are political reasons why Shumlin might change his mind.

The first is that closing the plant will subject Vermont rate payers to having to buy replacement, fossil-based power at rates as high as $0.15/KwHr. This is two-and-a-half times the rate they pay now for electricity from Vermont Yankee, which supplies about one third of the electricity used in Vermont. That’s a huge hit on voter pocketbooks and its effects will be felt across the state.

The second reason is that closing the plant in 2012 insures that it will become a highly visible political eyesore for Shumlin. It will take two years to move the plant from being actively operated to generate electricity to be ready to begin D&D. It will take another decade to decommission the plant. The spent fuel from the plant will remain at the site for up to 60 years.

He can call for “immediate” decommissioning, but it won’t matter or make a difference. There is nothing the governor can do to change that schedule since the NRC is in charge of this process. The agency will follow its own regulations which lay out a process for safely permanently shutting down a nuclear reactor.

Shumlin’s political opponents won’t hesitate to tag him with the responsibility for heart-stopping increases in the cost of electricity and that he’s turned an economic asset which supports 700 jobs into a high security spent fuel respository that supports a dozen jobs.

They will also tag him with the loss of thousands of other jobs in a small state as its biggest employers exit in search of cheap electricity.

A first-term recall election isn’t outside of the realm of political feasibility if things get really bad with brownouts on top of higher electric bills. All this will happen on his watch if he succeeds in closing the plant in 2012. That’s just two years from now into a four-year term.

How much power does Shumlin really have?

The decision to close the reactor isn’t Vermont’s to make. The NRC issues the license, not the state legislature. Entergy spokesman Larry Smith said as much following Shumlin’s tour of the plant.

“We are moving forward with our plans at the federal level to get a new license from the Nuclear Regulatory Commission and to seek approval from the Vermont Legislature and a certificate of public good from the Public Service Board,” Smith said.

That outcome might be based on some changes at Vermont Yankee that even an anti-nuclear arch druid like Shumlin might find to be an attractive alternative to sky high electricity rates and ignominiously losing his job over them.

According to WCAX TYV, a new owner at the plant and a new, low-price power agreement might stop lawmakers from pulling the plug. Entergy has confirmed it is talking with other utilities about selling the reactor and transferring its license. A deal would be contingent on settling issues with the Vermont legislature.

A politically savvy source in Vermont told this blog in November Shumlin “gets it” that political reality will require him to make a deal over the future of Vermont Yankee. The only question now is how he gets there and what the deal looks like to voters in terms of its impact on their checkbooks.

Several people have sent comments suggesting the if the current or future owner(s) of Vermont Yankee made a substantial contribution to the Vermont Clean Energy Development Fund, on order of several $millions, that would appease Gov-elect Shumlin.

This sounds at first like a bribe. In in Germany Chancellor Angela Merkel imposed a 50% profits tax on the nation’s 17 operating nuclear reactors to generate about $2.3 billion annually for renewable technologies.

This is a proposal for piracy operating under the delusion that solar energy makes any sense in Vermont, which has the same lousy winters as Germany in terms of days of sunshine.

I guess we should all live in caves?  This is nonsense based on some romantic notion of going back to the land. Agriculture represents just 3% of economic activity in the state.  And Vermont Yankee does not contaminate your tomatoes or those of anyone else.

Wouldn’t the same concerns also apply to the fabrication and transportation of wind turbine towers, nacelles and blades, or large-scale solar installations?  They are as much the products of a high-energy civilization as the components of a nuclear power plant are, and they can’t exactly be hauled by oxcart.  It also sounds like you imagine that one day soon, all the oil in the world will simply stop flowing.  I don’t know any serious adherents of the Peak Oil view who think that will happen.

I agree, anonymous. In the many months I’ve tried to participate on TEC, I’ve never heard a solution offered.

Dan, if the nuclear plant is wearing out, then fix it. Pretty simple. Don’t resort to the same name calling we hear from deniers.

Geoff, you need to learn the basic physics concept of the harmonic oscillator. A spring is approximated to have a restoring force proportional to displacement from some minima. The calculus solution simply provides a sine wave oscillation over that parabolic curve. So we are stuck in an oil oscillation. The economy improves, oil prices rise and we are pulled back. The economy falters, and people like you tell us how much oil we have and how cheap it is. Over and over, back and forth.

As for lowly agriculture, I agree with Robert Rapier’s idea that the midwest should keep ethanol. And keep the food and export cash, too. The rest of you don’t produce much we can’t get elsewhere. And we have a new Ag. Commissioner in Minnesota. I’m hopeful new biofuels will see a new emphasis. Maybe we can export that, too.