Gerard Reid is founding partner of Alexa Capital in London. He has over two decades’ experience in equity research and fund management in the energy area. He is also a monthly columnist for the...

The tremendous advances being made in lithium battery technology are being underestimated by many people, writes financial energy specialist Gerard Reid. Competitive EVs are just a few years away. They will be followed by radical improvements that will have huge implications for air and ship transport as well. Courtesy Energy and Carbon blog.

I constantly hear from people that batteries are just not good enough; that they are too expensive, that they cannot hold enough energy, that they take too long to charge. In a nutshell, that they can never replace oil to power the automobile or be used alongside solar panels to power our everyday home needs.

The interesting thing is that I agree with all these criticisms. However, I am also clear that these challenges will be solved in the coming years thanks to the usage of new chemistries and materials as well as intense competition between battery manufacturers. I am also convinced that better batteries will lead to the electrification of not just cars but also trucks, busses and increasingly air and sea transport.

At the same time, we will use these batteries in our homes, businesses and grids as part of decentralized energy systems. And all these batteries will be most likely based around the element lithium. 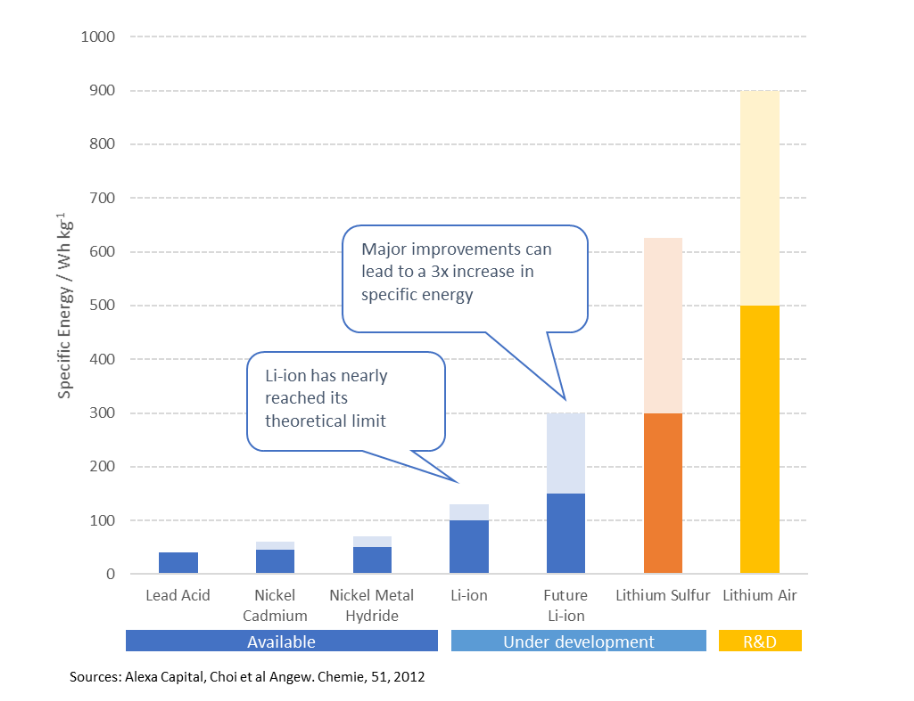 Lithium is quite unique as a material in that it is very light with the lowest reduction potential of  any chemical element which allows batteries based on lithium to have unbeatable performance. The other advantage is that there is lots of lithium out there, some 400 years of output according to the US Geological Survey.

The most popular type of lithium batttery is the lithium-ion battery which because of its unmatchable combination of higher energy and power density has become the rechargeable battery of choice for power tools, mobile phones, laptops and increasingly electrical vehicles (EVs). That all said, there are many different types of lithium-ion battery.

And I don’t mean just different manufacturers such as Panasonic, LG Chem, CATL and Samsung. There are five major types of lithium-ion battery chemistry: LFP (lithium iron phosphate), NMC (nickel manganese cobalt), NCA (nickel cobalt aluminum), LMO (lithium manganese oxide) and LCO (lithium cobalt oxide), all of which have differing strengths and weaknesses, and all of which are used in different applications.

NMC, for instance, is generally regarded as the chemistry with the most potential for use in the EV given its high performance, safety and low cost. And in the short term there is significant potential to reduce the cost and improve the performance of NMC batteries.

Currently, the standard NMC lithium-ion battery is called a 333 meaning it uses 3 parts nickel, 3 manganese and 3 cobalt. Going forward, we will see 811 NMC batteries which will use more nickel which increases performance and less cobalt which decreases cost.  However, none of these lithium-ion chemistries are going to provide the energy and power density required to power an airplane, so the search is on for better materials.

One of the most interesting possibilities is to replace the commonly used graphite anode in the lithium-ion battery with cheaper and theoretically 10x more energy dense silicon. Note, I said theoretical as the issue with silicon is that it degrades quickly which means its lifespan is not long.

The good news is that are many firms such as Nexeon and Wacker Chemie working on resolving this issue, and in fact it is widely believed that Tesla and Panasonic are already sprinkling silicon on the anode side of their new Model 3 battery.  Other technical innovations could involve the replacement of one of the battery’s key components in the battery, the electrolyte which is currently a liquid, with a solid electrolyte which would be safer while also improving energy density. However, these changes will all take time.

Moving from the test laboratory to production takes many years. Materials need to be developed, then tested, again and again to ensure that they are safe and have the longevity and other characteristics that customers require. In addition, production processes need to be put in place to ensure that those batteries can be produced cost effectively and at high qualities. Toyota, for instance, has been working for many years on so called solid-state batteries and they are not expecting to bring this technology to the market till 2022!

The good news though is that lithium-ion batteries costs are likely to fall another 50% by 2020 to $100/kWh while at the same time energy density should increase by 20% which will help bring the range of the average electric vehicle (EV) towards 500km.

At the same time, this should be enough to ensure cost parity with the internal combustion engine (ICE) car which will in turn give the market for EVs a huge boost. And with growing competition particularly between America, Europe, China and Japan driving innovation at breathtaking speeds, it may not be that long before many of the breakthroughs mentioned above come to market.

This competition is also likely to push radical new technologies such as lithium-sulphur and lithium-air to the market much quicker than what most people currently expect. Such technologies theoretically can deliver energy densities greater than gasoline can which would have huge implications for not only road travel but also air and ship transport. Now that would make things very interesting!

Gerard Reid is founding partner of Alexa Capital in London. Her has over two decades of experience in equity research and fund management in the energy area. He is also a monthly columnist for the German energy industry publication BIZZ energy today and has been lecturer at the university in Berlin for the last decade.

This article was first published on Energy and Carbon, a blog hosted by Gerard Reid and energy journalist and advisor Gerard Wynn. It is republished here with permission.

I agree that the cost of battery storage will continue to fall, and that new batteries will have higher power densities — translating to faster charging — and at least slightly better energy densities. I also agree that lithium chemistries will be at the core of virtually all portable batteries.

I disagree that energy density of rechargeable storage batteries will ever be high enough for long distance air travel. Even the most optimistic forecasts I’ve seen for lithium-sulfur and lithium-air don’t project energy densities close to liquid hydrocarbons. For medium distance air travel, it’s quite possible that electric aircraft powered by cold compressed hydrogen will prove feasible, but that remains to be seen.

An important point that this article does not address is that the storage market is far from a “one size fits all” ideal. Potential applications span an enormous range of capacity and cost requirements. For example:

With today’s lithium-ion technology, storage already pays off for peak clipping and supply firming. The limited amount and high value of the power they’re called on to supply, combined with the comparatively rapid cycling, mean that $250 per kWh of storage capacity is no barrier to feasibility. Yet even at $100 per kWh, the price would be too high for 24-hour buffering in a 100% RE scenario. The amount of storage required for that is so large that, absent a stiff carbon tax, $40 or less per kWh capacity would be needed to compete with dispatched generation. And for 7 day buffering to bridge extended periods of adverse weather, the feasibility cutoff is more like $6 per kWh.

There’s a chance that new types of flow batteries could provide storage cheap enough to address the 24-hour buffering market. That would be very good new for renewables. However we’re not there yet. If and when we do get there, the batteries will probably not be lithium-based.

…better batteries will lead to the electrification of not just cars but also trucks, busses and increasingly air and sea transport.

As important as batteries will obviously be for cars, we should not be so complacent as to think they will also help with air transport. The few electric airplanes built to date have mostly been converted gliders (i.e. planes so energy efficient that they can normally be powered by rising air currents).

The reason we won’t see commercial battery powered planes is because the energy density of batteries is far too low, at today’s 100 WH/kg. Even the optimistic future value of 900 Wh/kg cited for hypothetical lithium air batteries is far from the 5200 Wh/kg (LHV) that is available today using ammonia fuel (which is 43% of normal jet fuel). Batteries will always have a disadvantage over liquid fuels because batteries must have a large amount of materials that provide structure support, conduction paths, and separation of layers; fuel tanks are light weight. Batteries have the additional disadvantage that they have the same weight when depleted as when full (unlike a fuel tank). Aviation is an especially bad economic fit for batteries, since aircrafts use preventive maintenance, so the batteries would have to be replaced long before any failures are expected to occur, yielding a very short service life.

Ammonia is a carbon-free liquid fuel (NH3) which can be made from electricity, water, and air. It can be used in certain types of fuel cells, as well as piston and turbine engines. Unlike hydrogen, ammonia is easily stored, so it can be made when electricity is cheap, even if that means storing it for months at a time (unlike batteries, which would have to be charged in between flights, which would reduce the flights per day, thus hurting aircraft economics). Ammonia’s superior energy density would allow much longer flights than batteries (potentially up to cross-country), which would yield a greater potential market share; plus longer flight reserves would be practical, yielding greater safety.

The advantages of ammonia fuel extend to sea transport as well. Here is an article about it.

With today’s lithium-ion technology, storage already pays off for peak clipping and supply firming. The limited amount and high value of the power they’re called on to supply, combined with the comparatively rapid cycling, mean that $250 per kWh of storage capacity is no barrier to feasibility. Yet even at $100 per kWh, the price would be too high for 24-hour buffering in a 100% RE scenario.

Tiny now – but should grow to almost 1GW over the next year.