As a scientist and an unabashed nerd, I love data. Particularly, I love it when ready access to data reveals things that are surprising in the face of conventional wisdom. 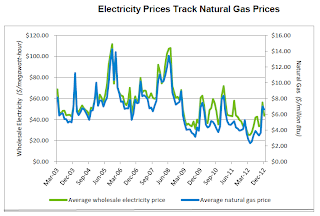 An interesting case comes up with this year’s colder winter in New England. (Thankfully, I’m located in damp, icy East Tennessee, where even the threat of ice and snow manages to bring civilization to a grinding halt.) In particular, Meredith Angwin noted an interesting press release by ISO-NE (the grid operator for the northeastern United States), ostensibly pointing to record-low wholesale electricity prices, but containing something more interesting buried beneath – a slow but quite noticeable creep of wholesale natural gas prices upward to the range of $6/MMBtu (1 MMBTu = 1 million British Thermal Units).
At first glance, this seemed a bit surprising to me, given that while spot prices for natural gas have nudged a bit upward, they’re still hovering well under the $4/MMBTu mark; in other words, they don’t seem to be going anywhere fast. What really began to catch my eye however was the cyclic behavior of gas prices in the chart from ISO-NE, something which doesn’t show up in spot prices from Henry Hub (which generally sets the market spot price for natural gas in the U.S.) 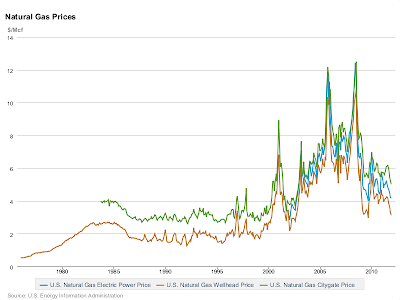 Looking to verify the trend, I dug a little further around EIA’s website. While unfortunately their data on “citygate” prices are a few months behind, the regular periodicity in the citygate price was likewise not there – instead, taken as an average across the U.S., spot, wholesale, and electricity costs derived from natural gas tend to have a strong correlation. Yet here we see above in the data from ISO-NE that prices clearly are deviating substantially from spot prices – what gives? 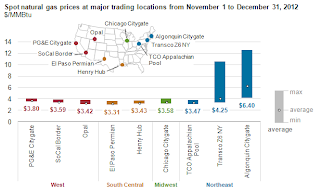 It turns out in fact that the culprit is in distribution. A look around EIA’s website brought me to this interesting report, which notes that supply bottlenecks in U.S. northeast for natural gas are expected to produce significant variances in energy prices from the rest of the U.S., and in particular from Henry Hub prices.

In essence, despite a relatively abundant supply of natural gas at the wellhead due to the proliferation of wells seeking to exploit unconventional resources, one thing the laws of physics haven’t changed for is the capacity of distribution infrastructure – in other words, pipeline capacity. Natural gas doesn’t really care where its end destination is – be it for electricity or home heating. Which means a cold winter can easily drive up demand and stress pipeline capacities – precisely what is occurring, according to the EIA report: utilization rates at the Algonquin compressor station have averaged around 86% for the months of November through December 2012. 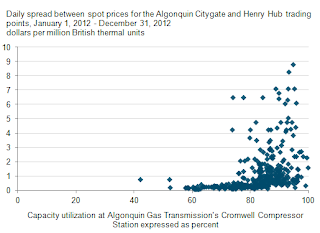 Basic economics can predict what happens next. Because natural gas is generally shipped across pipelines as a compressed gas, due to frictional losses across the pipeline, it must be repressurized at terminals across the pipeline network. The higher demand for gas goes, the closer to maximum capacity these terminals reach. And, as EIA data helpfully shows, the closer utilization reaches to 100%, the larger prices begin to “spread” from spot prices at Henry Hub.

In other words, while the commodity price of gas may indeed be cheap, the wholesale cost to utilities can be an entirely regional phenomenon. This is especially true in the blustery cold of New England winter, where demand is especially cyclic. 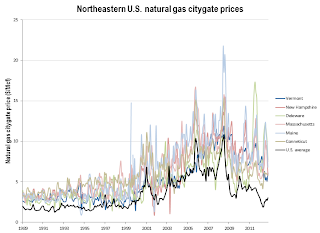 I compiled together citygate prices for natural gas across the Northeast and compared them to U.S. average citygate prices, and the effect is quite clear – states in the Northeast pay on average an appreciable premium on wholesale prices over the U.S. average wholesale, precisely due to these types of bottlenecks, particularly during times of peak demand (i.e., cold winters). Obviously, pipeline capacity has been steadily increasing in response to demand for gas, however the real issue will inevitably be cyclical “spikes” due to competing uses of gas as a heating source.

Why go to all of this trouble to look at trends in gas consumption (especially when I’m not an energy economist by trade)? Namely because it upends some recent “conventional wisdom” about energy; namely, gas prices are still a regional phenomenon.  While there are some places where supply is not as constrained by distribution capacity (or driven by cyclic consumption) and it thus makes perfect sense to look at natural gas a short-term replacement electricity source (particularly for coal), the Northeast is a shining example where this is definitely not the case. Which in turn makes efforts to shut down stable and relatively low-cost (not to mention carbon-free) baseload sources like Vermont Yankee (and Indian Point) all the more insane – despite the claims of proponents to this end, the balance of electricity from these plants would not be made up from renewables but rather almost certainly come from natural gas. To which again, low spot prices for natural gas are in fact a remarkably poor indicator – especially if one considers what adding an additional consumption driver would look like in terms of utilization “bottlenecks” during times of peak demand (i.e., winter).

I still remain unconvinced of the argument that wholesale natural gas prices are set to explode (and so stand by my bet with Rod Adams) – namely because of the fact that an abundance of known, recoverable supplies makes economics of the raw commodity relatively self-correcting. (In other words, as gas prices go up, so too will the number of wells, pushing prices back down to an equilibrium). However, revolutions in the recovery of gas from novel geology hasn’t changed the fundamental physics of pipelines – which in turn may be the real constraint to natural gas growth as an electricity source, at least on a regional scale.