When ideology wins over science, we all lose

Europe is fully committed to addressing the climate crisis, targeting a 55% reduction in carbon emissions by 2030 (from 2020 levels) and then becoming the world’s first carbon neutral continent by 2050.  Today, almost half of its low carbon electricity comes from nuclear power as Europe has the world’s largest operating nuclear fleet with more than 100 operating units in 13 countries.

Nuclear power brings many benefits to the people of Europe providing reliable clean economic electricity, while supporting about 1 million high-quality jobs.  But Europe is also home to a vibrant anti-nuclear movement, that has varying levels of support in the governments of its many nations.  This opposition tends to be strongly ideological in nature to the extent that for some, phasing out nuclear and its large role in providing clean electricity has become more important than their commitment to reduce carbon emissions.

The result is that some countries in Europe are implementing policies to phase out existing nuclear plants.  France has shut down its two oldest units at Fessenheim (its regulator was clear they could safely operate for another decade).  Sweden has shut down units when they could have operated longer even though they are committed to maintaining a nuclear fleet.  Belgium has just recommitted to its nuclear phase out by 2025 and is replacing these nuclear units with gas generation, thus increasing their carbon emissions.  Germany has shut down much of its fleet and is phasing out the rest even though it has been replacing much of this energy with coal generation.  A recent report suggests that its objective to eventually phase out coal means it will end up with more gas.

This is hard to understand.  Only those ideologically opposed to nuclear can find this approach of removing operating low carbon nuclear before its time and increasing carbon emissions with fossil fuels sensible.  Clearly, they fear nuclear power more than they fear climate change.  When new gas and coal plants are built to replace retiring nuclear, fossil use is being institutionalized for decades.  No new plant is built to operate for just a few short years.  The International Energy Agency (IEA) in its most recent Projected Cost of Electricity report has added a new category of generation – life extended nuclear – and finds it to be the least cost of any new generation option.  For governments that believe future energy needs can be met with renewables alone, it would make most sense to eliminate fossil fuel first to keep emissions coming down and then remove operating nuclear when a low carbon replacement is available.  Rather than supporting a renewable future, supporting new fossil generation is tacit acceptance that renewables can’t do it all.

Those who are against nuclear and don’t accept its low carbon credentials, have worked hard to keep nuclear out of the European Taxonomy, the classification system of activities deemed beneficial to the climate to be eligible to attract various forms of green financing.  As the taxonomy was being created, an assessment of nuclear by the technical expert group (TEG) (the group tasked with reviewing activities to determine their adherence to taxonomy principles) determined that nuclear power does produce very low carbon electricity.  This was not sufficient to convince detractors of the merits of nuclear.  For these groups the TEG raised questions about whether or not nuclear meets the other criteria for acceptance into the taxonomy, the Do No Significant Harm principle.  This was based on the premise that nuclear waste may do significant harm to the environment.  It was agreed that further study of this issue would be undertaken by an expert group (known as the JRC).  In March 2021 the JRC issued its report and was unequivocal in its conclusion – “there is no science-based evidence that nuclear energy does more harm to human health or to the environment than other electricity production technologies already included in the EU Taxonomy as activities supporting climate change mitigation “.

Many did not like this conclusion as no science-based argument can deter them from their righteous path.  Countries like Germany have decided to phase out nuclear power and would like to see others do the same.  The Energy minister of Luxembourg stated that the EU JRC nuclear report is biased, unscientific and complains over lack of transparency, calling the EU JRC a “pro-nuclear, industry organisation”.  Of course, why task an expert group with studying an issue if you are unwilling to accept its conclusions unless it confirms your current beliefs.  Ultimately it is because when you are a believer, and something does not support your point of view, it must be wrong.

It is good to know that as of now, it looks like science is winning and the EU taxonomy will include nuclear, but in a separate delegated act to come out later this year.  However, there will be many who fight to see this does not happen.  If one argument fails, there will always be a new one to take its place.   If science is demonstrating that nuclear power is indeed safe and that waste can be safely managed, the argument moves on to cost (no one is suggesting that a project proceed that does not meet economic criteria).  And if that doesn’t work, the current argument is that new nuclear just takes too long to make a difference and thus, deflects from the real solutions to climate change.

As stated by Bill Gates in his new book, nuclear power is “the only carbon-free energy source that can reliably deliver power day and night, through every season, almost anywhere on earth, that has been proven to work on a large scale”.   Accepting the science that nuclear power is a safe reliable low carbon option does not require any jurisdiction to build one if they don’t want to or feel they have other better options.  However, those that support it will be helping the environment.  And for those that oppose, please don’t shut down safely operating plants early and replace them with higher carbon options, especially new fossil plants.   The objective is to reduce carbon emissions, not increase them.

After all, you asked the scientific community to give its opinion on nuclear power and it has stated its result as clearly as it can – “there is no science-based evidence that nuclear energy does more harm to human health or to the environment than other electricity production technologies already included in the EU Taxonomy as activities supporting climate change mitigation “

But Europe is also home to a vibrant anti-nuclear movement, that has varying levels of support in the governments of its many nations.  This opposition tends to be strongly ideological in nature to the extent that for some, phasing out nuclear and its large role in providing clean electricity has become more important than their commitment to reduce carbon emissions.

In instances like these, it seems always valuable to try to find out as best as possible where the opposition is coming from to best inform the approach. Do you think the opposition is of fear? Misunderstanding? Incentives otherwise? How can they best be engaged directly to address real concerns while still moving towards the ultimately needed solutions?

Please let me point out that while energy production in Europe is changing, it is very hard to reach the conclusion that nuclear is being replaced by gas.

"Over the past decade (2009-2019), the trend in primary energy production was generally negative for solid fossil fuels, oil, natural gas, and nuclear energy. The production of natural gas saw the sharpest decline (-49.4 %), followed by oil and petroleum products and solid fossil fuels (with a drop of 34.6 % and 33.2 %, respectively). The production of renewable energies followed a clear positive trend over the same period (except in 2011), with a 48.3 % increase, similarly to waste (non-renewable), which saw a 36 % increase." 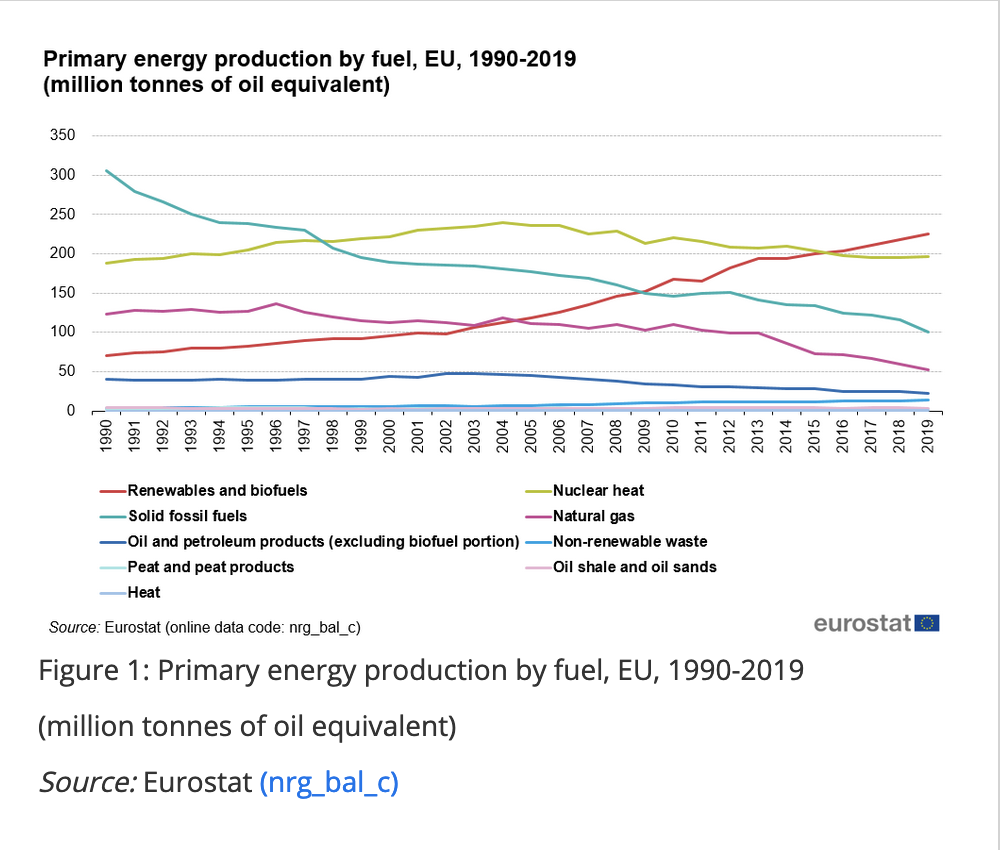 It is a myth (I wonder who started it?) that nuclear is being replaced by gas.  So far, nuclear, coal, gas and oil are all getting replaced by renewables.

So, the premise of this sentence is not valid.

"Only those ideologically opposed to nuclear can find this approach of removing operating low carbon nuclear before its time and increasing carbon emissions with fossil fuels sensible."

And make no mistake: Greenhouse gas emissions in the EU will continue to fall, not least because of the costs of emissions from the ETS: 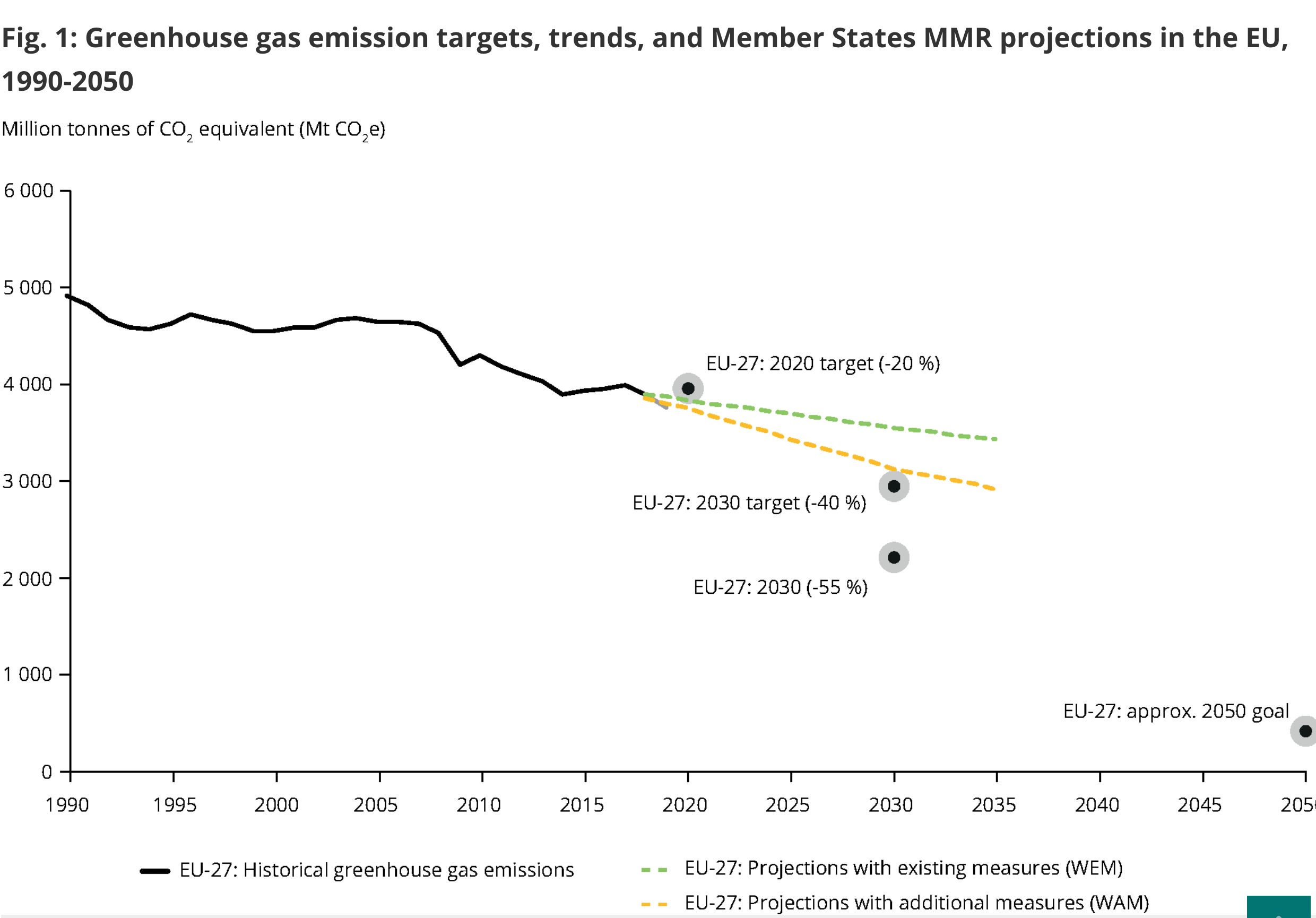 You are quite welcome to excoriate the gas industry if you wish. Heaven knows they deserve it.  Or you can blame the ideologues. I guess we all know that Europeans are silly that way.  But you are barking up the wrong tree(s).

Mark, energy substitution is a zero-sum game.  For every MWh of renewable energy that is added to the grid, only one MWh of other generation can be removed.  And every time a MWh of nuclear generation is removed instead of a MWh of fossil fuel generation, that's a wasted opportunity to reduce emissions (unless one doesn't think reducing emissions is a high priority).