Peter Lang is a retired geologist and engineer with 32 years’ experience on a wide range of energy projects throughout the world, including managing energy R&D and providing policy advice for...

If not for disruption by the anti-nuclear power protest movement the world could have had cheap, reliable, secure, sustainable comparatively safe electricity supply by now (Lang, 2017). The benefits for the global economy and human wellbeing could have been substantial: clean, safe, reliable power supply, 4.2 to 9.5 million deaths and 69 to 174 Gt CO2 emissions avoided, and nuclear providing up to 66% of the world’s power at around 10% of its current cost.

From 1954 to 1967 the cost of nuclear power plants was decreasing by around 25% per doubling of global nuclear power capacity (based on construction start dates). Then progress was disrupted. Thereafter, costs increased rapidly, by 22% to 94% per capacity doubling (except in South Korea). 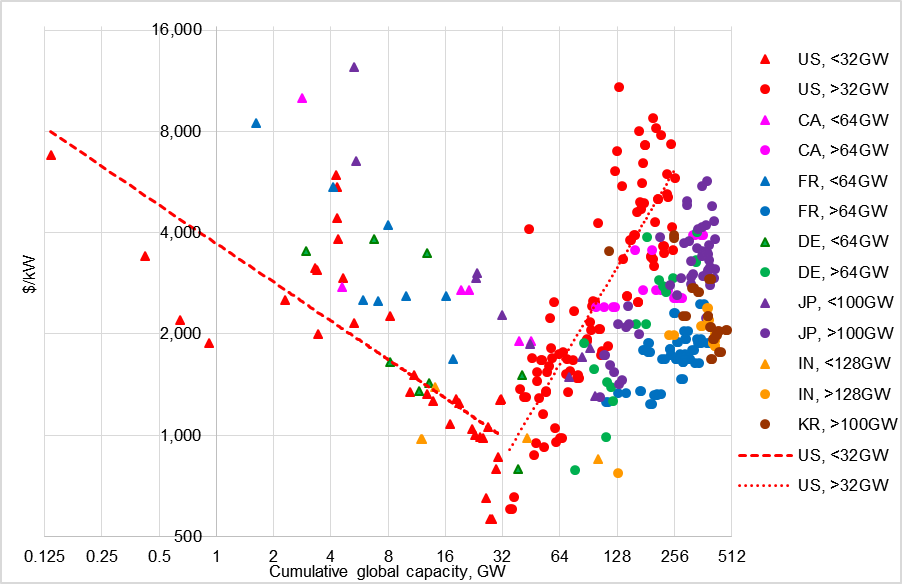 If the pre-1967 rates had continued the cost of nuclear power could now be around 10% of what it is (see Table 1, and Appendix B Note XII, and V).

In 1976, about 9 years after the start of the escalating costs, the global deployment rate of construction starts stalled (red bars in figure below). 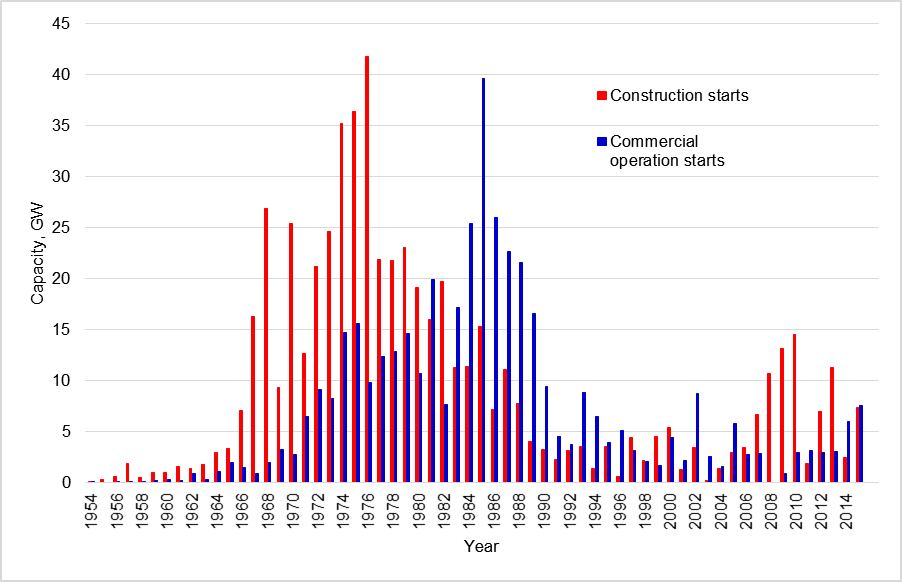 It's time for the developed countries to lead the world to get serious about nuclear power.  Some of nuclear power’s advantages are, it:

Other economic benefits and policy implications are presented in Sections 3.5 and 3.6.

A likely-root cause of the disruption, and the cost escalations and stalled deployment rate since about 1967 was, and still is, the activities of the anti-nuclear power protest movement (Appendix B, Note IX ).

To achieve the substantial benefits available by transitioning to nuclear power requires a recognition of the disruption and its consequences, identification of its causes, and amelioration of the impediments that are slowing progress.

Tony Irwin, 2017. The Contribution of Nuclear to a Reliable, Affordable and Low Emissions Energy Future for Australia. SMR Nuclear Technology, Submission to the Australian Energy Security Board. http://www.smrnuclear.com.au/wp-content/uploads/2017/11/SMRNT-ESB-Submission-Nov-2017v1.pdf

Thanks for the insights Peter. Do you think this is a story more of what could've been, or is nuclear in the coming years salvageable as a signficant source of clean energy? Is the fear too far entrenched, the timing too late?

Thank you for your questions. I’d prefer to not answer them on this thread at this stage because they are not in the scope of the paper that the post is about. The paper is a counterfactual analysis of empirical data over the period 1951 to 2015. Your questions require speculating about the future. Discussing the issues might divert discussion from the subject of this post. I feel the answers to your questions would be better done in a separate post.