What are the Risks Related to Solar Power Investment?

An earlier article offered some qualitative discussions on the risks involved in several mainstream energy options. Following the previous article on onshore wind, the next four articles will present a quantitative analysis of these risks for utility-scale solar PV, nuclear, natural gas and coal. The analysis will be presented for a typical developed world scenario. Developing world technology cost levels are very different and will be covered in a future article.

All the most influential assumptions will be clearly explained and their impact on the results will be quantified. This will give the reader the opportunity to clearly see the quantified impact of the risk under the assumptions they think are the most appropriate.

Results will be presented in the form of a discounted cash flow analysis for only 1 kW utility solar PV over a one year construction period followed by an operating period that lasts for as long as the plant is profitable or up to a maximum of 40 years. The investment is made in the first year, followed by the annual receipt of revenues from electricity sales and payment of operating and maintenance (O&M) costs.

Capital costs are taken as $1800/kW. This was found to be a good global average when adjusting for purchasing power parity (see previous article). O&M costs are taken as 1% of the capital cost per year and these costs are assumed to increase linearly by 1% per year. Plant output is assumed to fall by 2% in the first year and linearly by 0.8% per year afterwards.  Inverter replacement every 15 years is included at a cost of $100/kW (hardware and installation).

After the initial $1800 capital investment, the annual cash flows from electricity sales at an average wholesale price of $60/MWh and a capacity factor of 18% are shown below. The linear decline in plant performance is clearly visible, as well as the linear increase in O&M (although O&M costs are relatively small). Inverter replacement costs are also notable. Note that the 18% capacity factor is selected to be optimistic next to the global average that has hovered around 15% for the past 4 years according to BP data. 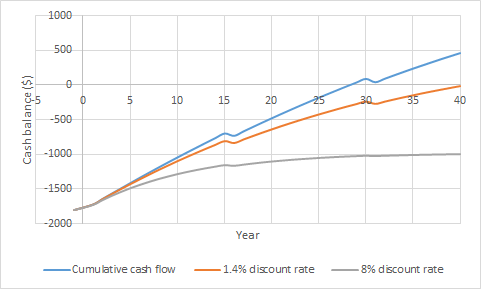 Subsequently, the effects of the value declines and cost increases related to intermittency (discussed in the previous article) are included. Firstly, the added cost of grid connection is included as an up-front cost. It is assumed that the average distance between the solar farm and the consumer is 100 km, yielding an added capital cost of $200/kW at a transmission cost of $2/kW/km.

Thirdly, the value decline of solar power is modelled according to the following market value factor. At market shares higher than 15%, the linear trend is extrapolated. It should be mentioned that this trend is representative for Europe, China and Japan (representing 74% of current installed capacity) where solar capacity factors are quite low. Markets like the US South-West, Australia and the Middle East will see less pronounced value declines resulting from higher capacity factors and a better match with seasonal demand.

Wind and solar value factors (a value factor of 1 is for a generator with a constant output) as a function of their respective market shares (source).

The following annual cash flows are generated when these assumptions are applied to a plant constructed when the solar market share is 2% (current global average) and increasing by 1% per year (up to a maximum of 40%). The more rapid decline in revenue (caused by the value decline) and the increased balancing costs are clearly visible.

As shown in the cumulative cash flow analysis below, not even half of the initial investment can now be recovered, even under a 0% discount rate. The plant starts making a loss at the time of the first inverter replacement at year 15 as declining revenues fall below increasing costs. 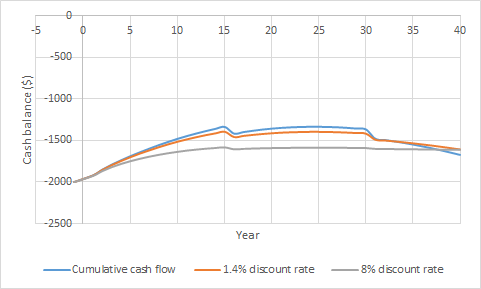 Effect of the discount rate

The graph shows that the required electricity price almost quadruples as the discount rate is increased from 0% to 15%. Inclusion of the value decline, balancing costs and grid costs increases the required electricity price by about $60/MWh at 0% discount rate with a moderate increasing trend towards higher discount rates. This impact is double that of wind power because of solar's more pronounced intermittency and high correlation with other solar generators.

Next, the influence of the risk of accountability for value declines and cost increases caused by intermittency will be quantified. This quantification is done by determining the discount rate giving zero return on investment when the average electricity price is set to $60/MWh. The annualized return on investment is then quantified as the discount rate minus 2% to account for margin erosion from technological improvements of new plants that come online during the plant lifetime as well as financial/legislative costs (paying the bankers and lawyers involved in setting up financing for the plant).

The magnitude of the drop in investment returns is strongly influenced by the rate of solar power expansion over the lifetime of the plant (grey bars). More solar on the grid will reduce the value and increase the balancing costs of all solar generators. An increase in the rate of solar expansion from 0.5% to 1% per year lowers the investment return by 7%, while a further increase in expansion rate to 1.5% per year cuts another 5% off the annualized return.

The effect of added grid expansion costs (yellow bars) is smaller. Increasing the required grid connection from 100 km to 500 km (thus increasing the added up-front cost from $200/kW to $1000/kW) only decreases the annualized investment return by a little over 2%.

Finally, the effect of balancing costs is shown by the green bars. Every increase of $0.2/MWh per % of wind market share decreases the investment return by a little over 2.5%.

This article has quantified the large negative effects of solar intermittency on project economics. The potential that these costs will eventually be fairly attributed to solar generators presents an important risk for solar farm investors.

Even when these intermittency effects are completely ignored, the global average solar farm does not give any return on investment without direct subsidization. As always, however, I have to stress that there are locations where solar is much more attractive. For example, the US South-West can achieve very impressive capacity factors up to 30% thanks to an excellent solar resource and high inverter loading ratios (which also increases capital costs to about $2200). Under these assumptions, the annualized investment return amounts to 2.2% (with no accountability for intermittency effects). Such high capacity factors will also significantly reduce the value decline.

When intermittency costs are correctly accounted for, the investment returns fall drastically - substantially more than for wind power. The annualized return on investment drops from -0.6% to -13.5% when intermittency costs and value declines are accounted for under the base-case assumptions. This very large decline can be moderated by battery storage systems because of solar's regular daily production cycle. A future article will explore this potential mitigating effect.

The most influential factor in the analysis is the rate of solar power expansion. Higher expansion rates lead to larger investment losses. Interestingly, this dynamic actually reduces the investment risk because the steady increases in solar market share that cause this risk will not take place if value declines and integration costs are fairly assigned to solar generators.

This reinforces the earlier notion that continued solar power expansion will require perpetual subsidies. If solar power is to have the impact envisioned by green advocates, the large investment losses caused by their value declines and integration costs will need to be borne by other sectors of the economy for decades to come.