We may never learn the truth about the Texas blackout

The reasons for the grid collapse are now a matter of intense debate. In the absence of detailed data the debate is mostly over general statistics, which do not establish causality.

A gas shortage caused it.

The gas shortage was caused by electrification of the pipelines.

Unpredictable need for electricity caused it.

It was an Act of God.

(Okay I have not heard that one yet. Wait for the liability issues.)

My personal conjecture, just to join the speculation crowd, is that a big frequency drop caused a mini-outage-cascade around 1:55 am Monday morning, automatically tripping off at least four big gas fired plants. Re cascades, big blackouts can be triggered by a frequency or voltage drop that causes one big generator to automatically trip off. This shock causes others to then auto trip in a cascade. Similar to stock market crashes causes by cascading automatic sell orders.

This instability may well have been caused by the wind turbines that were running, not the frozen ones. I have already written a good bit about how wind can destabilize the grid and the Texas wind power varied greatly, by something like 5,000 MW over time.

Other plants were then tripped, either automatically or manually to avoid a complete blackout, even a big nuke. About 13,000 MW shut down very quickly, followed slowly by more. The ERCOT CEO says they narrowly avoided complete failure, which is very hard to recover from (called a black start).

Why they did not plan for a power need at least as big as they got in 2018 is also a mystery. Global warming syndrome?

Normally a massive outage like this is explained by the engineers after an exhaustive investigation. After all, they have second-by-second or better records of most of it. This is the only way to determine precisely what happened, sequentially and causally.

But these are not normal times. The problem is that these local energy issues involve one of the largest political and financial issues of our time, namely the use of renewables and the supposed threat of climate change.

On the financial side renewables are big business. More to the point, the utilities are making huge amounts of money building wind and solar facilities. The more they spend the more they make, as long as the regulators approve and they are pushing for renewables. For example, Xcel led the way several years ago and now they have proposed $8 billion in new capacity for Colorado.

I am sure that with all this revenue coming in the utility engineers have long been told by their management to keep quiet about the perils of intermittency. I see hints of it hidden away in the back pages of long reports, but that is about all. The engineers know that intermittent renewables are destabilizing.

On the political side renewables are one of Biden’s top priorities, as he calls for a quick end to fossil fuel use. He has also ordered all Federal agencies to push his climate agenda. His climate czar Mary Nichols even rushed out a video saying that wind power was not the cause of the Texas grid collapse.

This is important because the definitive investigation of the Texas catastrophe is by the North American Electric Reliability Corporation (NERC) which is a federal entity under the direction of the Federal Energy Regulatory Commission. Under the Biden/Nichols influence NERC may well greenwash the results of the study.

In short, given that both the utilities and the Feds love wind power, we may well get a bogus result. If they say wind had nothing to do with it, that is almost certainly a deliberate deception. A lie.

Will NERC lie to hide the adverse impact of wind power in the Texas blackout? Time will tell. Stay tuned.

David - the best explanation I've seen comes from Texas transmission consultant Gene Preston, and surprisingly it has little to do with weather. It's been a long time coming.

ERCOT started shedding load at 2:34 AM on Feb. 15 to avert a total failure. 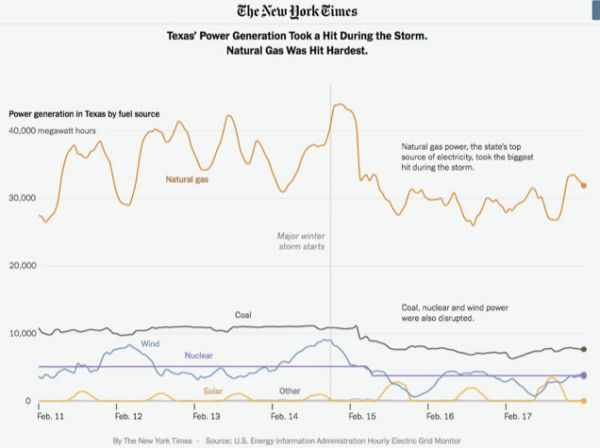 David   you mentioned every possible cause of the Texas black out except the one that is universally accepted as the cause - Failure to adequately freeze protect the power plants.  Your post is ideological and not science driven.

John, though "failure to adequate freeze protect the power plants" might be univesally accepted among ideologically-driven advocates, that's one of many problems introduced by intermittent, unreliable renewable electricity.

Here's a more fundamental one, presented by a Texas grid expert:

Though the presentation is somewhat technical, it might be boiled down to: "inability/unwillingness of Texans to pay astronomical electricity rates to subsidize a meager, non-dispatchable supply of power."