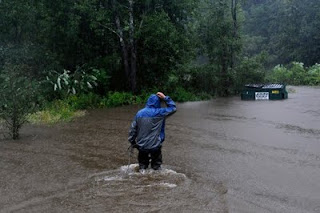 Every major weather event raises the same debate over the same unanswerable question: was it caused by climate change?

And every time, some prominent name or public figure, fed up with media coverage or with the persistence of skepticism about science or the lack of action, throws statistics out the window and says yes. Or says something like “Irene’s got a middle name, and it’s Global Warming”, as 350.org founder Bill McKibben wrote in the Daily Beast. That in turn draws legitimate pushback, further polarizes the public discussion about climate change, and makes some long-time participants of the debate want to smash their head against a wall.

The good news is that this cycle has been going on for long enough that people have finally began to reword the question. In Climate Central, Michael Lemonick tried “Is climate change making this storm worse than it would have been otherwise?”. That is a slightly better than the staple question, but still demands more certainty than can really be provided by the evidence.

The New York Times asked the subtly different, but far more sensible question: “Are hurricanes getting worse because of human-induced climate change?”. By shifting from the particular storm to the sequence of storms over time, it becomes a question we can actually answer with data and statistics. As the article by Justin Gillis finds, scientists including NOAA’s Tom Knutson, who I worked with on a related subject, are divided on the interpretation of past data on hurricane intensity.

Hurricane Irene was a reminder of one of factor that should draw more attention in the climate change and hurricanes discussion: rain. The worst damage from Irene came from the heavy rains and floods in Vermont and surrounding areas (the above photo is from CBC News). You can see the data yourself on the USGS real-time streamflow page for the state, a fantastic resource for everyone from regional planners to recreational paddlers (my old haunt the Millstone River in New Jersey reached almost triple the flood stage on Sunday) which may be subject to budget cuts.

If I had to place money on which feature of tropical cyclones or hurricanes would increase the most because of climate change, I’d bet on rainfall, ahead of other metrics like intensity (wind speed) or surge height. Warmer water means more evaporation; warmer air can hold more water.

That doesn’t mean the flooding in Vermont was caused by human-induced climate change. But it might mean that we can get more agreement on the answer to the New York Times question.