The title says it all. Virtue signaling in the climate change and sustainability space has become an endless cacophony of tiresome, disingenuous, and irrelevant polemics. Whether it's a Hollywood elitist or Greta Thunberg as shown above. It is a rampant disease and infestation masquerading as intellectual benevolence and compassion. Leonardo DiCaprio's own green example is questionable according to Forbes. Nevertheless, he felt sufficiently self-righteous and compelled to lecture the United Nations on climate change with an egregious dose of Hollywood inner party virtue signaling. Here's an important point, Mr. DiCaprio.

What is really scary is that some people that are beset with ganglion virtue signaling syndrome THINK that they can be scientists and engineers.

As a result, climate change and the role and functionality of sustainability have become muddied and obfuscated particularly concerning the implementation of problem fixes and broad strategic thinking. This has, and will continue to lead to, calamitous outcomes for societal functionality.

Today, we are relentlessly are bombarded that we must do "something" about climate change. Lobbying groups such as the Citizens Climate Lobby (CCL) boldly proclaim the problem and profess to offer solutions. Sort of. The reality is that CCL inexplicably only proposes one solution which is to price carbon. As Abraham Maslow famously said, “If the only tool you have is a hammer, you tend to see every problem as a nail.”. Arguably, the CCL, despite all its advertised good intentions concerning the need for action to ameliorate climate change, has made critical and crippling blunders with their core messaging and their obsequious and tiresome obsession with virtue signaling.

There is a huge difference between proposing authentic, viable strategies and compulsively practicing virtue signaling. 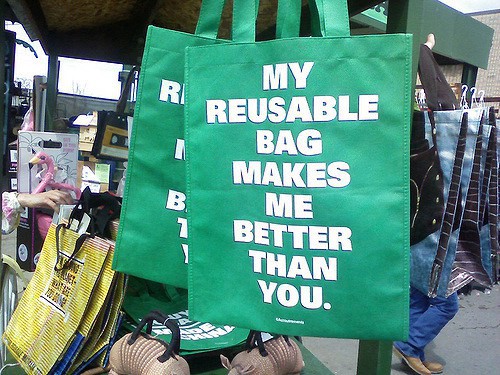 The Climate Change Lobby represented by organizations such as Citizens Climate Lobby (CCL) have become the 21st Century’s version of what Big Energy was before the onset of the era of the environmental movement as climate change advertising has become big business. The environmental movement started in earnest on the first Earth Day on April 22, 1970. An article in Forbes in 2020 bemoans the confusion that both businesses and their customers experience with climate change and sustainability messaging. Arguably, the lobby is doing more damage to the cause of both rectifying climate change and sustainability with their scientifically and technically shallow discourse.

For example, a mouthpiece of the climate change lobby, Climate Social, blithely and blindly praises the Green New Deal and gives kudos to United Nations in their July 11, 2022 messaging in “Trends in Small Business – Sustainability.”

“From the youth climate strikes, to the Green New Deal, to the preparations for the United Nations’ Climate Summit in September, there is no debating that “Climate Action” has made its way into all sectors and industries — including large and small businesses alike.”

In summary, the Green New Deal which is materially contained in the US House Resolution 109 from the first session of the 116th Congress is more of a potpourri of social agendas that are ensconced within a contrived national sustainability initiative. The authors of this proposed bill ignore several key sustainability maxims such as resource footprint, resource efficiency, and land use.

Astoundingly, the authors of this bill call for all US energy production to be replaced by solar and wind. Just meeting America’s current electricity needs with wind energy would require a territory more than two times the size of the state of California.

In summary, lauding the Green New Deal as a way forward is flawed judgment at the very best and bordering on professional negligence at worst..

The UN has bestowed the title of "UN Champion of the Earth" to Costa Rica because of its prodigious utilization of hydroelectric, solar, and wind for energy production. However, these technologies all have large land area requirements. At Costa Rica's current relatively low per capita energy footprints (about 10% lower than China's), the country's energy mix requires about 6.3% of its land area energy production facilities have resulted in the displacement of indigenous people and other problems.

If the Costa Rica's energy footprint were that of the US and it uses the same energy mix, Costa Rica would have to commit over 26% of its land area for energy supply.

Using renewable sources is important, but not acknowledging the aggregate sustainability metrics in specific situations is misleading. Disconcertingly, the UN appears obsessed with virtue signaling in not conveying a balanced and realistic sustainability perspective for this situation. The UN's "Champion of the Earth" is a sustainability pariah based on the underlying metrics.

Virtue signaling in the climate change and sustainability space has become an endless cacophony of tiresome, disingenuous, and irrelevant polemics. Because of virtue signaling, people are compelled to do almost anything to address climate change even it ultimately proves to be counter-productive.