Great to see UAE's Masdar sharing their renewable expertise with countries around the region. Renewables are booming in developing countries.

According to Uzbekistan’s Energy Ministry, Masdar is expected to invest up to $300 million in these projects with a financial close scheduled for December 2021 and construction anticipated to start in the first quarter of 2022.

These projects are part of a wider scheme between the Government of Uzbekistan and the IFC to develop up to 900 MW of solar energy through public-private partnerships.

These plants also contribute to the Government’s plan to develop 8 GW of solar and wind capacity by 2030. Once implemented, they will develop Uzbekistan’s huge solar potential, help reduce annual greenhouse gas emissions by about 500,000 tonnes of CO2 equivalent, and generate an additional 1,100 million kWh of electricity.

In the coming month, the Uzbekistan government is planning to launch a Request for Prequalification for up to 500 MW of PV power plants to be tendered out in three different regions, the Energy Ministrybsaid, adding this third round of IFC tendered solar projects will also include a battery storage component for one of the sites.

"Renewables are booming in developing countries."

Your attempt to characterize two 220MW solar plants as indicative of a "booming" industry, in a country with 18% capacity factor and a population of 33 million, is amusing at best.

It reminds me of the time Greenpeace showed up in an Indian village with plastic solar panels that would offer each customer a whopping 15 watts of intermittent power. Though Greenpeace offered to install them for free, most villagers declined. Instead, the village bought a diesel generator and built a crude grid so they could have minimal but reliable electricity on demand.

The belief that "15 watts should be good enough for the poor natives" would be cute if it didn't have racist overtones.

Your attempt to characterize two 220MW solar plants as indicative of a "booming" industry, in a country with 18% capacity factor and a population of 33 million, is amusing at best.

I understand Bob... it's sometimes tough to see how one or two small projects fit into a trend. Especially when these projects get built so quickly.

Construction on these projects will start and end in 2022. Then onto the next round...

In the coming month, the Uzbekistan government is planning to launch a Request for Prequalification for up to 500 MW of PV power plants to be tendered out in three different regions,

Before you know it you have 8GW of clean power..

It must be particularly hard for folks who focus on nuclear where projects take 10 years to complete. Very limited number of projects/countries to keep an eye on. Pretty simple.

Plus a lot of these solar/wind projects in developing countries get very little publicity.

For instance - this other Masdar project in Armenia was also just recently announced.

The project was described by Masdar CEO Mohamed Jameel Al Ramahi as “Armenia’s biggest utility scale solar project,” and by David Papazian, his peer at the Armenian state body, as “by far the largest single foreign investment in green energy in the region, and the second largest foreign direct investment in the history of modern Armenia.”

Thanks for the feedback Bob. I think I'll try to start putting more of these links from other countries up so that folks can see how widespread the boom actually is.

"I understand Bob... it's sometimes tough to see how one or two small projects fit into a trend."

You mean failing to meet expectations? That trend is easy to see - it's so remarkably consistent!

Post what you will, but folks don't really care if the editors at PV Magazine have joyously announced renewables have doubled from nothing to next-to-nothing; that there's a little more intermittent, unpredictable capacity somewhere than there was last year. They know it sells magazines, and there's a sucker born every minute.

That trend is easy to see - it's so remarkably consistent!

I have to admit - you are spot on - it really is remarkably consistent.

Below is WW generation by fuel chart. You know the source.

I'm gonna with 355 TWh in additional renewables generation for 2021. What about you? 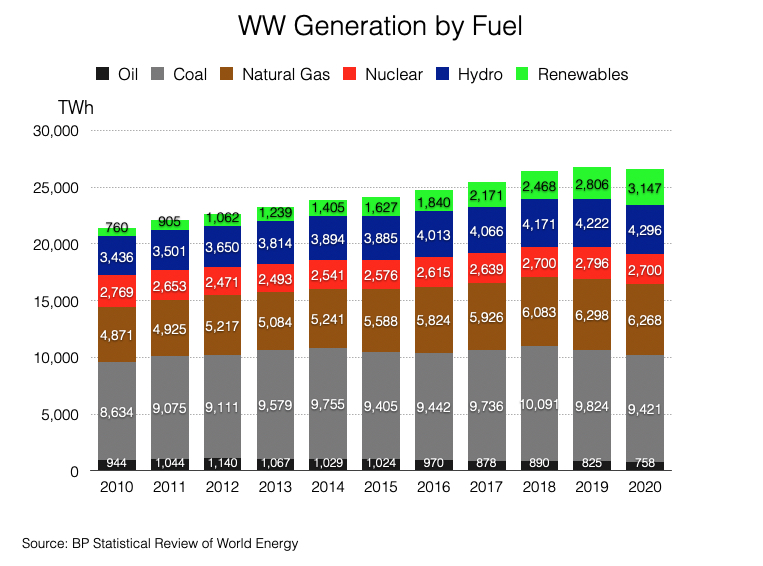 Thelma and Louise: Are Utilities Driving Energy Production Off a Cliff?
Global Low-Carbon Energy Technology Investment Surges Past $1 Trillion for the First Time
Embracing the Future: How Utilities Can Leverage Distributed Energy Resources for Success
Is it feasible? Is it legal? Sunnova micro utility plan explained as CPUC mulls decision