Economists are suckers for a good paradox. Few things are more intellectually appealing to the practicing economist than a result which runs counter to his or her immediate intuition. Indeed, some of the most enduring ideas in history of economic thought have surprising implications at the heart of their allure; from the paradox of thrift to Ricardo’s law of comparative advantage.[*] For their part, the specialized fields of energy and environmental economics are not immune to the charms of counter-intuitive theories either. This includes textbook favourites like the green paradox and the rebound effect.

Beyond the intellectual appeal, it is clearly sensible to be mindful of such factors when designing policy. However, our inherent affinity for paradoxes is also problematic in that it can cause people to overstate their role in real world situations. To illustrate using the aforementioned rebound effect, Nature recently published a comprehensive literature survey on the subject by Gillingham et al. (2013). The authors show that the rebound effect’s significance is much overplayed, being typically only in the region of 10% (with an upper bound of about 30%). Hardly a compelling objection to improved efficiency standards then.

I would suggest that understanding the appeal and potential pitfalls of counter-intuitive ideas provides a useful framework for thinking about natural gas and the environment. In my upcoming series of posts I’ll aim to explore this issue in more depth by touching on such factors as fugitive methane emissions, cost-effectiveness and barriers to entry, water pollution and so forth.  However, for today’s post I’ll focus on a specific (paradoxical) effect that the U.S. gas glut appears to be having on European emissions.

There is widespread agreement that shale gas played a major role in bringing U.S. carbon emissions to a historic twenty-year low in 2012. This should not come as a surprise given that gas-fired power plants emit about half the CO2 per MWh compared to their coal-based cousins. However, some commentators have warned about surging U.S. coal exports, as cheap gas forces American coal companies to seek foreign shores. The obvious concern from a climate perspective is that the global emissions will not be substantially altered as a result; the reduction in U.S. coal consumption at home will simply be offset by increased burning of U.S coal abroad. European emission trends certainly appear poised to be adversely affected.

Empirical support for this idea can be found in the International Energy Agency (I.E.A.’s) Medium-Term Coal Market Report 2012, which indicates that U.S. coal exports to Europe rose by 29% last year. Rather than being an entirely new development, it could be suggested that this is actually part of a wider secular trend. As depicted in Fig. 1, U.S. coal exports have been on the rise since the early-mid 2000s, following a steady decline over the previous decade or so. We can also see that Europe is primary driver of this trend. Of course this is still consistent with the shale gas story, with the boom brought on by hydraulic fracturing (“fracking”) now ongoing for roughly the same period. 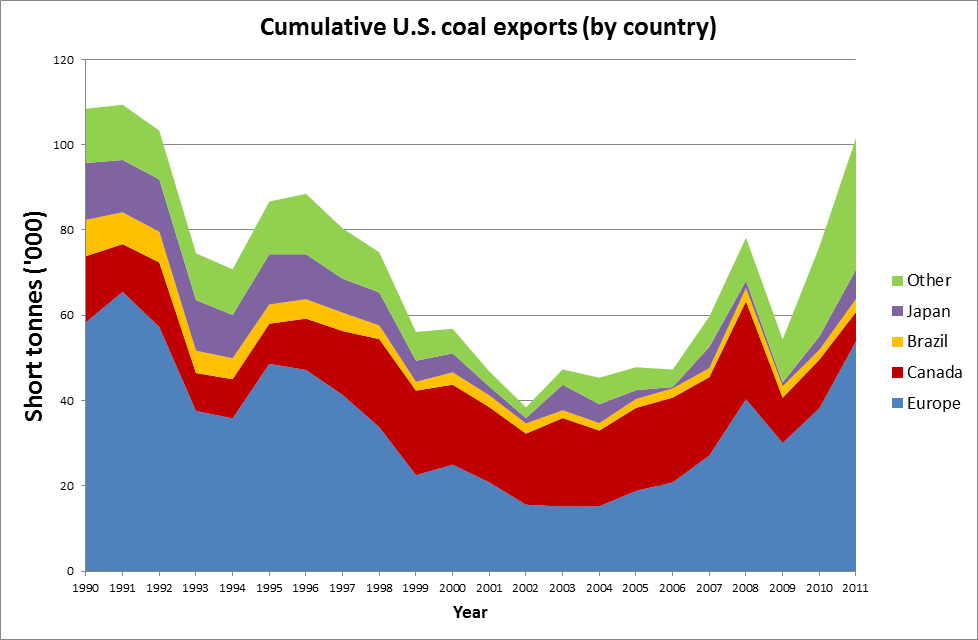 The varying degrees to which the coal and natural gas markets are globally integrated plays a key reinforcing role in all of this. Coal is widely traded across international waters with seaborne cargo accounting for a full 90% of all coal trading volumes (IEA, ibid.). In contrast, gas – particularly of the non-LNG variety – is much harder to store and transport over long distances. This has resulted in regionalized gas markets that have fairly distinct boundaries. The shale glut in the U.S. has only served to underscore this regionalization by precipitating a divergence in international gas prices (Fig. 2). 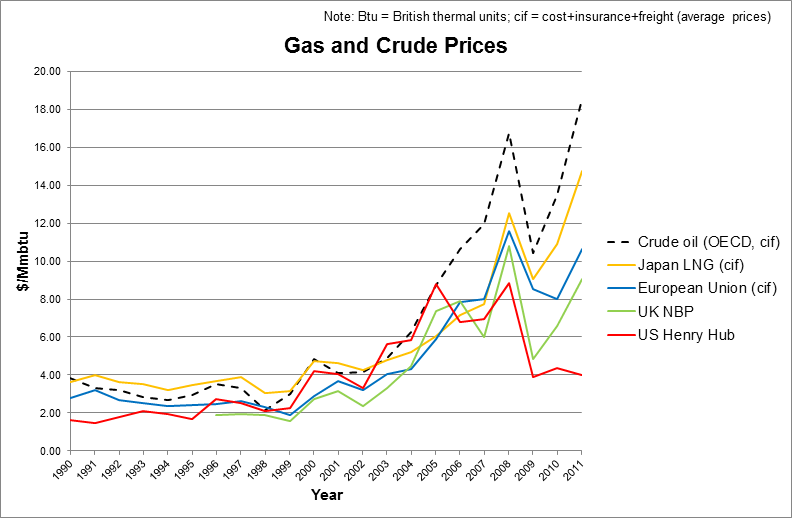 Will this undermine European, or even global, climate goals?

The short answer to this question is “no”. While the recent trends in European imports of U.S. coal may have grabbed the headlines, it is important to realize that this is largely a short-term phenomenon. The IEA itself forecasts that the coal-for-gas reversion in Europe will probably peak this year, and that the continent’s coal demand will steadily drop afterwards due to “increasing renewable generation and decommissioning of old coal plants”. My own feeling is that the much-maligned EU ETS acts as a natural break on this sort of thing anyway, since any sustained increase in coal imports should see a resurgence in the carbon price.[**] Indeed, as I have written elsewhere, cheap U.S. shale gas may ultimately help to make unilateral climate action by Europe more meaningful. In essence, we should think of the EU ETS as placing a tariff on incoming dirty energy. To the extent that rising U.S. coal exports are a form of carbon leakage then, European climate policy will be able to “capture” these leaks through its cap-and-trade system.

The take home message is that the perverse impact of U.S. shale gas on European emissions is likely to be short-lived. Again, it is important to be mindful of the paradoxical effects that stand to impact our energy and climate policies, but not overstate their significance.

[*]A famous tale has it that Paul Samuelson, whom many consider to be the pre-eminent economist of the latter 20th century, was once challenged by the mathematician Stanislaw Ulam to name “one proposition in all of the social sciences which is both true and non-trivial”. Samuelson ultimately responded with the theory of comparative advantage: “That it is logically true need not be argued before a mathematician; that it is not trivial is attested by the thousands of important and intelligent men who have never been able to grasp the doctrine for themselves or to believe it after it was explained to them.”

[**] The price of EU ETS trading permits has plummeted together with actual emissions in the wake of Europe’s economic woes (in conjunction with an overallocation of initial permits).

Has the lower price of coal in the USA not resulted in some mines closing or reducing output?

As European short-term demand for coal starts to drop the demand for US coal could shift towards Asia. Japan and China are the top coal importing countries in the world. In 2011, Japanese imports of US coal increased by 2.6 million metric tons. However, last year China overtook Japan as the world's largest coal importer and US exports to China is predicted to increase to 12 million tons. Even though this figure is small compared to the amount of coal that China imports from Australia and Indonesia, the US will definitly find a market for coal in Asia.

Yes, you are correct. The most prominent case in 2012 that I am aware of was the decision by Alpha Natural Resources to close eight mines. (Cutting 1,200 jobs in the process.)

The IEA Medium-term Coal Market Report that I refer to above also foresees difficult times ahead for U.S. coal producers -- particularly in the Appalachia region -- due to the increased competition from shale gas and conditions of (global) structural oversupply. "Given sustained weak coal demand over the outlook period, parts of the coal industry in the United States will have to be restructured and consolidated in the coming years." (p. 74)


It is not a big negative to export your excess coal. The world needs energy if the USA doesnt export it that will just mean more $$$ and more jobs for countries like indonesia who are happy to meet demand. Im sure conditions and wages are better in the states so its worth keeping your coal industry and jobs alive by allowing exports IMO

Thanks Manzoor. I certainly agree that some U.S. coal will find its way to Asia, but I also think that there are institutional limits on how far this can go. E.g. I read of an interesting new report from IHS CERA recently, which projects that "Chinese will peak by the end of the decade and enter a prolonged period of decline, thanks to a combination of moderating demand and increased domestic production". Also, as you rightly mention, it will be hard for U.S. collieries to make substantial incursions into the Chinese market because of the proximity of Australian suppliers.

It will certainly be interesting to follow what happens with Japan's coal imports (and consumption generally) over the next few years. I don't think it makes too much sense to use 2011 figures as a benchmark for inferring long-term trends given the dramatic influence of the Great East Japan Earthquake and ensuing tsunami... not too mention the crippled Fukushima nuclear plant. (Though these events will certainly shape the development of future energy policy.)

One interesting development of late is the big push to open up new export terminals on the Pacific Northwest, which would significantly expand the export capacity in this region. (E.g. Take a look at the Gateway Pacific Terminal.) As I understand it, most of these are currently under review by government authorities.