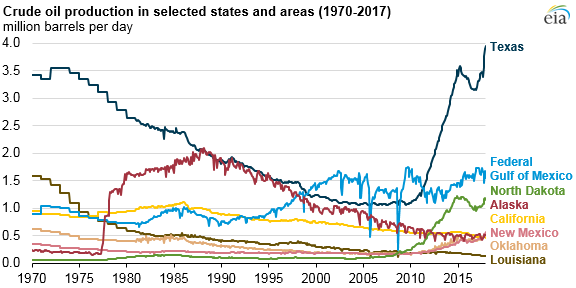 Although much has changed since 1970, Texas continues to produce more crude oil than any other state or region of the United States. Texas has held the top position in nearly every year since 1970, with the exceptions of 1988, when Alaska produced more crude oil than Texas, and from 1999 through 2011, when production from the Federal Gulf of Mexico was higher.

Texas crude oil production averaged 3.5 million b/d in 2017 and reached a record high monthly level of 3.95 million b/d in December 2017. Texas’s 2017 annual production increase of nearly 300,000 b/d—driven by significant growth within the Permian region—was more than all other states and the Federal Gulf of Mexico combined.

Growth in the Permian region, which spans parts of Texas and New Mexico, also contributed to a 74,000 b/d production increase in New Mexico, the state with the second-largest growth in 2017. New Mexico surpassed California and Alaska to become the third-largest crude oil-producing state in the second half of 2017, although it produced less than those states on an annual average basis.

Production levels in Colorado, Oklahoma, and North Dakota each grew by more than 30,000 b/d from 2016 to 2017, while Alaskan production increased only slightly. California’s production declined 34,000 b/d, the state’s third consecutive annual decline.