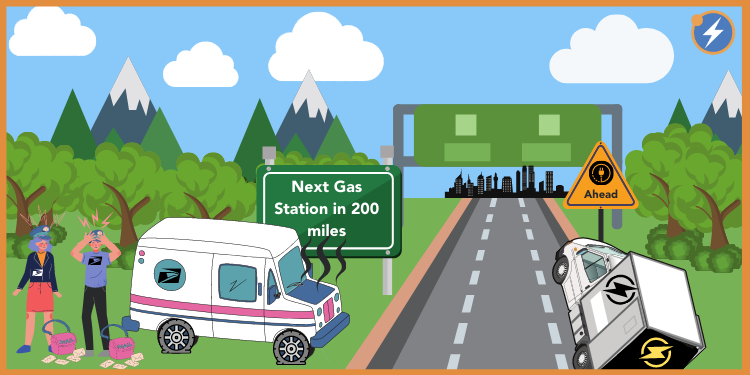 So the United States Postal Service went shopping for what it called its “next generation” of delivery vehicles. But the USPS doesn’t go shopping like the rest of us, especially because, when it talks about “next generation,” the Postal Service means vehicles that it expects to be in service for decades. And especially when it’s doing so at a time when the entire auto industry is making a transition from internal combustion engines to electric drive trains, with automakers declaring an all-EV future and major fleet operators placing orders for all-electric trucks and delivery vans by the hundred thousands. So what can you call it when the USPS places an order for its next-generation vehicles based mostly on last-generation vehicle technology? We call it a missed delivery.

In the 1980s, the United States Postal Service put out a request for a new and long-lasting vehicle to replace its fleet of Jeep DJs. Ultimately, the contract was awarded in 1987 to the Grumman Aerospace Corp. which, along with General Motors, produced the Grumman Long Life Vehicle (LLV), specifically for use by the USPS. The LLV, which is equipped with a tight turning radius and made from corrosion-resistant aluminum, is accurately named. These vehicles were expected to be in service for 24 years, but almost 70% of the LLVs on urban and rural routes today have been delivering letters and packages to Americans for between 25 and 32 years.

Over these decades of service, the LLVs have racked up quite a maintenance bill for the USPS. In 2019 alone, the USPS spent $706.2 million in maintenance costs for 141,057 LLVs. Given the increasing cost of keeping the aging fleet around, the Postal Service released a Request for Information (RFI) for its Next Generation Delivery Vehicle (NGDV) in 2015, kicking off an almost six-year process.

After soliciting comments, the USPS selected six companies to receive NGDV Prototype Contracts: AM General, Karsan, Mahindra, Oshkosh, Utilimaster, and a joint-venture bid involving Workhorse and VT Hackney. These companies all produced prototypes for the USPS to put to the test before issuing a final contract. The lineup featured hybrid and new technologies, including vehicles with alternative fuel capabilities.

Fast forward to 2021, and President Biden announced that the U.S. government would replace the entire federal fleet of cars, trucks, and SUVs with electric vehicles (EVs) manufactured in the United States, as part of a broader commitment to ensure the competitiveness of the U.S. auto industry in the coming electric transportation age.

While the USPS is an independent agency, giving President Biden limited authority over its decisions, one might have expected that the Postal Service would choose an all-electric model for its NGDV. After all, commercial EV startup Workhorse, which had ended its partnership with VT Hackney, was still in the bidding with its fully electric vehicle.

But on February 23, the USPS awarded a $6 billion, 10-year contract to Oshkosh, WI based Oshkosh Defense to manufacture a new generation fleet of up to 165,000 U.S.-built postal delivery vehicles.

The chassis of the new vehicles are designed to be flexible, meaning that they can work with both electric batteries or standard engines, so they could be retrofitted later. But Louis DeJoy, the current Postmaster General of the United States, made it clear that the USPS currently plans for only 10% of its new truck fleet to be electric. As a result, the USPS next-generation vehicles, which won’t start hitting the road until 2023, will start their likely very long lives with technology that is on the way out. And instead of giving the cash-strapped Postal Service the benefits of the lower fuel and maintenance costs associated with EVs, the USPS will be shelling out at the gas pump, performing oil changes, and replacing the myriad parts that break down in internal combustion engines, for decades.

Given that the USPS operates the largest vehicle fleet in the U.S., with more than 200,000 vehicles, this is a tremendous missed opportunity, not only for the USPS, but for demonstrating the value of fleet electrification with postal vehicles making the rounds  in every community across the country.

With or without the Postal Service, fleets have a big role to play in the electrification of transportation in the United States. While public attention gravitates toward light-duty passenger vehicles, fleet vehicles will have what a recent report from the Rocky Mountain Institute deemed an "outsized influence on the successful electrification of the entire transportation sector." These vehicles – which provide reduced spending on fuel and maintenance, overall emissions reductions, and operational advantages, including reduced noise pollution – drive scale.

Already, we have seen announcements from big name U.S. operations, including Amazon, UPS, FedEx, and Walmart, detailing their plans to electrify in the coming years. Likewise, schools are hoping to get in on the action by electrifying their school bus fleets. Just one day after the USPS announcement, Maryland's Montgomery County Public Schools (MCPS) board approved a 1,400 electric school bus fleet contract, the largest in the nation by a municipality. MCPS awarded the 16-year contract to Mass.-based Highland Electric Transportation, which will deliver, own, and charge the fleet. MCPS, located outside of Washington, D.C., serves over 200 public schools with more than 1,400 school buses, making it one of the Top 10 largest school bus fleets in the country.

These commitments demonstrate that the technology, and the interest, in fleet electrification are here now – and any fleet operator that is not taking steps to electrify is falling behind. It’s too bad that the USPS has gotten itself stuck in the slow lane.

Download AEE’s fact sheet on medium- and heavy-duty electric vehicles by clicking below.