U.S. Coal Exports Have Increased Over the Past Six Months 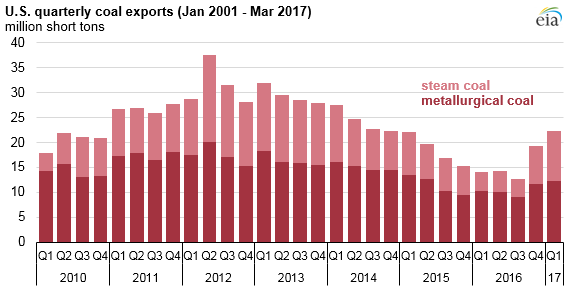 Baltimore, Maryland, is the other significant coal export location on the Atlantic Coast, and two facilities in Baltimore have the capacity to export 29 MMst annually: CNX Marine Terminal (15 MMst annually) and CSX terminal (14 MMst). A port expansion at the former Sparrows Point steel plant, by Tradepoint Atlantic, calls for possible coal export facilities, but the size has not yet been specified.

Coal export facilities in the New Orleans area have the capacity to export nearly 60 MMst annually, but planned increases that would more than double the area’s coal export capacity have been canceled, stalled, or gone unpermitted. The Mobile, Alabama, McDuffie coal terminal, which has a capacity of 30 MMst, mainly ships metallurgical coal, and it is also the nation’s largest coal import facility. Smaller export facilities in Texas on the Gulf of Mexico include port facilities in Houston, Galveston, Corpus Christi, and Texas City.

While most U.S. coal is exported from Atlantic Coast and Gulf of Mexico ports, smaller amounts of coal exports also originate from ports on the Great Lakes and in California. However, planned coal export projects elsewhere in the United States have stalled. A new export facility has been proposed for Oakland, California, but its construction is being challenged by local government.

Several large-scale coal export projects have been proposed in the Pacific Northwest. The Millennium Bulk Terminal is a planned export facility located in Longview, Washington, with plans to develop export facilities in two stages: initially to a capacity of 28 MMst and ultimately to 49 MMst. The state’s Department of Ecology recently completed a final environmental review of the project, and the U.S. Corps of Army Engineers will release its own final environmental review later this year.

Other coal export projects in the Pacific Northwest have stalled. Developers of a proposed export facility in Morrow, Oregon, decided to cancel the project, which could have handled exports of up to 7 MMst per year. Another project in Cherry Point, Washington—the Gateway Pacific Terminal—had proposed a coal export facility capable of exporting up to 48 MMst annually, but on February 7, the applicant withdrew all permit applications for the project.

More information on coal exports, as well as other coal-related data from EIA’s surveys, can be found in the interactive coal data browser.