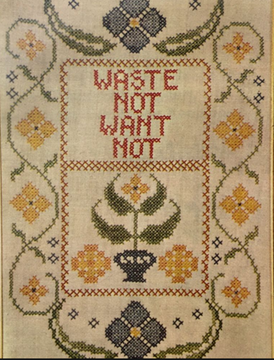 The folks at my alma mater, the University of Calgary,  describe waste heat as the unused heat given to the surrounding environment (in the form of thermal energy) by a heat engine in a thermodynamic process in which it converts heat to useful work.

Mark G. Flanner in the paper Integrating anthropogenic heat flux with global climate models points out that nearly all energy used for human purposes is dissipated as heat within Earth's land-atmosphere system and that the energy released from all non‐renewable sources is a climate forcing.

The following observed changes in the climate system by the IPCC shows how the accumulation of energy in the Earth’s climate system is escalating at an exponential rate. 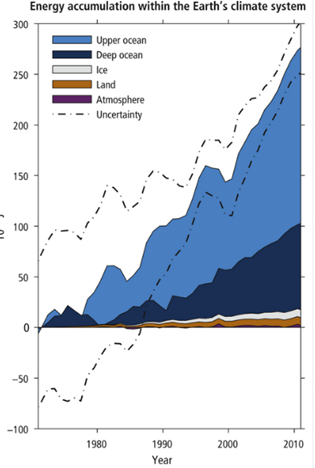 The following table shows how this escalation occurs with waste heat.

By accumulating waste heat within the Earth's land–atmosphere system at a rate of only 1 percent it takes only 468 years to start accumulating as much heat in the system as we are currently producing and in the last year the yearly increase is greater than the heat we started with.

Perhaps this is also in part the answer to the question posed by Bob Webster on these pages a few days ago. “What evidence exists that recent atmospheric CO2 growth is substantially being caused by CO2 emissions from fossil fuel combustion that justifies ignoring all independent studies by chemical engineers (and others) that indicate the atmospheric residence time for such emissions is between 4 and 6 years (at most)?”

Notwithstanding the second and third order effects reasoned by this writer to increase CO2  residence times in the atmosphere to as great as thousands of years, simply adding greenhouse gas for 7.5 years (splitting the difference between 0 and 15 years) you get a compounding forcing effect per the following.

The year 2014 is considered the base year for CO2 emissions at 35.9 gigatonnes.

If emissions were linear we would see only a 9.84 gigatonne increase a year.

Although Mr. Webster questions the cause/effect of carbon dioxide emissions, the Vostok ice core record for carbon dioxide concentration and temperature change correlation demonstrated by the following skepticalscience graphic shows the correlation, which it is not a perfect overlay.

Gavin Schmidt of NASA shows why the correlation of CO2 and Temperature are not precise here with the following table. 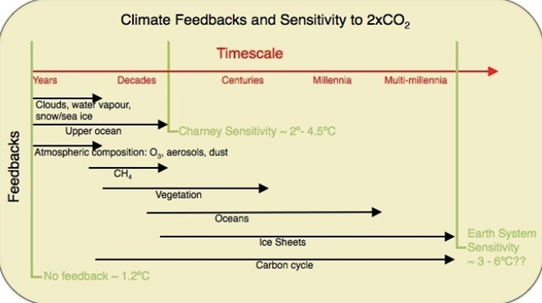 The “Charney” sensitivity is the medium-term response of the system to emissions and what most of us focus on, but the long-term implications can last from millions of years. For example, through a series of chemical reactions and tectonic activity, carbon takes between 100-200 million years to move between rocks, soil, ocean, and atmosphere in the slow carbon cycle.

The University of Calgary suggests we can harness waste heat which is music to a grandson of an Alberta rancher who ran 14,000 head of horses on his ranch at the outbreak of the First World War and to that end they offer cogeneration, waste to electricity and greenhouses per the following schematic. 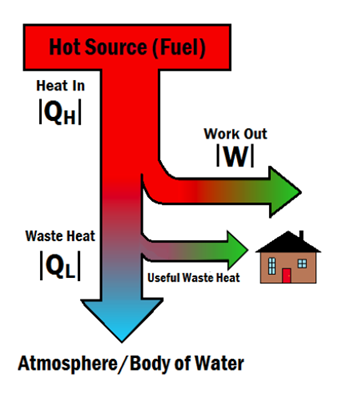 It avoids, however, the long-term implications of burning fossil fuels and overlooks the potential of using the heat of warming itself as an energy source.

The Kelvin–Planck form of the 2nd law of thermodynamics says it is impossible to take heat from a hot reservoir and convert it into work without, at the same time, transferring an amount of heat from hot to cold reservoir and it is such a transfer that takes place, uniquely, with ocean thermal energy conversion.

The practical implications of which are offered below.

What I have referred to as Thermodynamic Geoengineering, can produce twice as much energy as fossil fuels. Thirteen times longer than the fossil fuel era, while reducing sea level rise, storm intensity and can be adapted to neutralize ocean acidity and can sequester CO2 emissions in the ocean floor for as long as it takes for those emissions to be subducted and then be belched out in volcanoes hundreds of millions of years from now.

In other words, at the extreme end of the carbon cycle.

As the saying goes, if you use a commodity or resource carefully and without extravagance, you will never be in need.

Burn through that resource as quickly you can, as we have been doing, the outcome will be disastrous.

What I have referred to as Thermodynamic Geoengineering, can produce twice as much energy as fossil fuels. Thirteen times longer than the fossil fuel era, while reducing sea level rise, storm intensity and can be adapted to neutralize ocean acidity and can sequester CO2 emissions in the ocean floor for as long as it takes for those emissions to be subducted and then be belched out in volcanoes hundreds of millions of years from now.

Great read, Jim, and thanks for sharing. I was wondering if you could share a link or two to example projects using this type of thermodynamic geoengineering? I'd love to read some use cases and look at what these successes look like.

Matt, Thermodynamic geoengineering: a fourth way. was a proposal to the MIT Climate CoLab contest of 2015 under the Geoengineering Workspace  for initiatives, policies, and technologies that can counteract the effects of rising greenhouse gases, whether or not emissions are reduced.

The paper Negative-CO2-emissions ocean thermal energy conversion written by Dr. Greg Rau of the University of California, Santa Cruz, Institute of Marine Sciences and I shows how thermodynamic geoengineering avoids emissions and how each gigawatt power generated removes 13 gigawatts of heat from the ocean's surface, produces 130,000 tonnes of hydrogen and sequesters 5,000,000 tonnes of CO2 each year.

In the Climate Feedback graphic above the ocean and carbon cycles are two of the most persistent CO2 feedbacks as CO2 and H2O combine to produce  carbonic acid that dissolves rock over many millenia to produce hydrogen, oxygen and a carbonate or bicarbonate that neutralize ocean acidity and sequesters the CO2 as part of a solid.

NEOTEC speeds up natural weathering to a matter of hours.

The successes todate have only been at lab scale.

To scale this solution requires the kind of money that is currently going instead into fossil fuel subsidies.

Thanks for your interest and the opportunity to try to spread the word.

Jim, isn't there a project of some intermediate scale which would help take OTEC to the next level?

It seems the R&D "valley of death" between lab-scale experiments and a multi-$billion prototype will continue to be an obstacle to commercial deployment.

Bob you are right. The valley of death of is a huge obstacle.

Have tried numerous efforts to create a critical mass necessary for the R&D necessary for a 10 MW prototype but even Lockhhed Martin couldn't pull it off.

Apparently the imminence of a real valley of death will be the only thing that will move the needle.

Thanks as always for your input.