Britain has chosen to secure electricity supplies through a scheme which pays power plants to be available several years in advance, but falling prices suggest this capacity market is overkill and poor value for money, with ample alternative approaches, writes energy finance consultant Gerard Wynn. Courtesy Energy and Carbon blog.

The Institute for Energy Economics and Financial Analysis (IEEFA) recently published a review of how nine countries and regions with exceptionally high levels of wind and solar power have coped with the variability of these power sources.

Britain has opted for a capacity market, in combination with other approaches, to cope with an expected increase in variability in electricity supply, as the country switches to the wind and sun.

The UK’s adoption of a capacity market may be overkill, putting vast sums of public money at risk

But it turns out that countries with far higher levels of so-called variable renewables are doing without capacity markets at all, finding that other measures are sufficient, such as investing in transmission capacity, reforming power markets and requiring renewable energy technologies themselves to play a bigger role in meeting power demand.

The UK’s adoption of a capacity market may be overkill, putting vast sums of public money at risk.

The same utilities that are benefiting were big fans of the scheme when it was mooted in 2013. For example, SSE in 2013 warned that the UK was entering a “critical period”, including the risk of blackouts. Centrica also warned in 2013 of blackouts, in 2017/18, and said that it would not build another gas power plant without a capacity market in place.

As it happens, the capacity market – whose auctions have now been running for several years – has still not motivated a single large new power plant, but has allocated some £3.8 billion to power plant operators, including the same utilities, under auctions that are held 1 year and 4 years ahead of delivery, called T-1 and T-4 respectively.

Prices in the two most recent T-1 and T-4 auctions in early 2018 both saw price reductions, suggesting that the UK electricity system is coping well to date – see chart below. One would expect rising prices if the electricity system was short of capacity and needed a rollout of new generation. 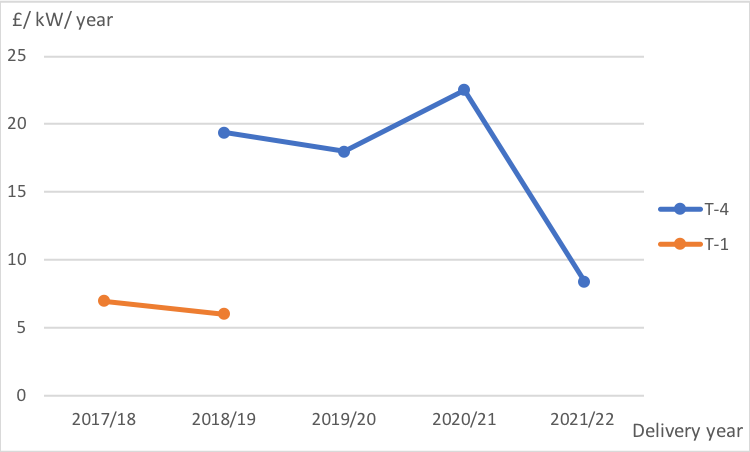 There are various possible explanations for these falling capacity market prices, including support in the early years of the scheme which motivated the construction of a new wave of very small generators; the prospective buildout of sub-sea interconnection into Europe; rising running times of gas power plants as coal power shuts down; and reforms to so-called cash-out markets to reward power plants that can respond quickly to supply shortfalls.

To its credit, Britain’s energy ministry did foresee the latter, saying before it introduced its capacity market: “In theory, as cash-out is fully reformed and the market has confidence to invest on the basis of scarcity rents the capacity price should tend towards zero under a capacity market.”

Such cash-out reform is a no-brainer, as an efficient market approach to incentivising flexible generation.

It isn’t too late to dial back the scheme, to focus on supporting emerging, enabling technologies such as battery storage

Given that the UK is both building out interconnection and reforming cash-out (which involves lifting caps on penalties and rewards for balancing real-time demand and supply), it may be that its capacity market is redundant.

Given the vast sums already spent, this is an important issue. It isn’t too late to dial back the scheme, to focus on supporting emerging, enabling technologies such as battery storage, and dropping support for existing gas, coal and nuclear, as IEEFA recommended last year.

Or it could even be phased out altogether.

IEEFA’s report reviewed nine case study power markets worldwide with very high levels of wind and solar power, at 14% to 53% of total generation. Only one of these, Spain, had a long-standing, comprehensive capacity market.

The report noted nine alternative actions that local and national grid operators and policymakers in these countries had taken to ease the transition to renewable power.

Gerard Wynn is independent energy finance consultant. This article first appeared on his blog Energy and Carbon and is republished here with permission.