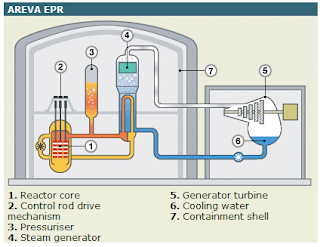 The deals are focused on the first new build at Hinkley Point in the UK.  EDF has referenced the 1600 MW Areva EPR reactor design for that site.

The UK government said in a statement the deal will create 1500 new jobs. The statement went on to point out the agreement advances greenhouse gas emission reduction goals.

The British prime minister, David Cameron, who is in Paris to meet the French president, Nicolas Sarkozy, to seal the deal, said the agreements were “just the beginning” of investment the government says could be worth £60 billion and create 30,000 jobs.

The government said the joint declaration to be signed today will signal “our shared commitment to the future of civil nuclear power, setting out a shared long term vision of safe, secure, sustainable and affordable energy, that supports growth and helps to deliver our emission reductions targets”.

The two governments will work together with the International Atomic Energy Agency (IAEA) “to strengthen international capability to react to nuclear emergencies and establish a joint framework for cooperation and exchanging good practice on civil nuclear security”.

The announcement comes just eight months after the Fukushima nuclear reactor crisis. It demonstrates the commitment of the two nations to use nuclear energy to address their needs for electricity.  The UK government has identified eight sites for new reactors. (see table below)

NucNet reports that highlights of the deal include;

• A £100 million contract with a construction consortium to prepare the Hinkley Point nuclear site in Somerset for construction of two European Pressurised Water Reactors (EPRs).

• A £15 million training campus at Bridgewater in Somerset to train the next generation of nuclear workers.

• A deal with Rolls Royce for key components that could be worth potentially up to £400 million.  Rolls Royce plans to build a purpose-built factory in Rotherham, northern England, which is also the site of the Nuclear Advanced Manufacturing Research Centre, which helps firms become certified nuclear suppliers.

A Rolls Royce spokesman said the hope is that the factory will become “some sort of springboard” for nuclear export orders in future.

A key isue facing EDF and the other firms planning to build nuclear power plants in the UK is that they are merchants.  They cannot recover construction costs until the plants enter revenue service.

A nuclear energy expert with experience in the UK told this blog the current UK government was elected with a strong pledge to not subsidize new nuclear.

In summary the expert said the UK government has developed a set of incentives as a part of a wider Electricity Market Reform.  In August 2011, the basic principles  of the reforms were approved, with carbon floor prices, low-carbon, base load generation, etc.

But the second important stage, setting carbon prices, has not taken place. The government now says it will release that information in May 2012.

The delay adds a factor of uncertainty to the futue of the UK new build.  Natural gas prices will rise over time so that may be less of a factor by the time the reactors come online by the end of this decade.

Scope of the UK new build

In November 2011 EDF Energy applied for consent from the UK’s Infrastructure Planning Commission to build and operate two new nuclear reactor units at Hinkley Point.  The France-based utility plans to construct the two EPRs to the west of its existing Hinkley Point B nuclear plant, where there are two units in commercial operation.