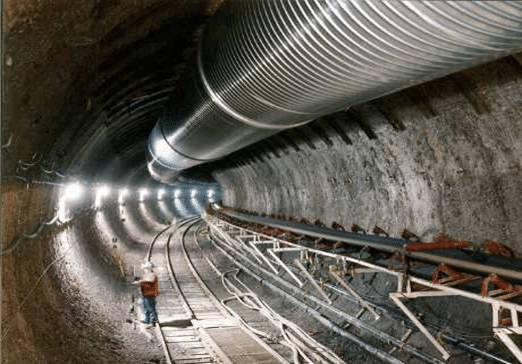 The first few words of the first bullet in the Department of Energy’s (DOE) section of the Trump Administration’s Budget Blueprint seem purposely chose to instigate maximum conflict.

This phrase, describing a spending item that represents just 0.4% of a $28 Billion DOE budget, opens up a new chapter in an argument that is as certain to cause political controversy without hope of resolution as either abortion or immigration.

In case you’ve stumbled on this post without a background on what Yucca Mountain is and why it is such an unresolvable issue, here is a brief recount of a story that would be as long as Homer’s Odyssey if told in full.

In 1976-77, Presidents Ford and Carter issued a series of Executive Orders that resulted in unilaterally closing down the nuclear industry’s long term plan of recycling used nuclear fuel. With their actions, those Presidents accepted federal responsibility for providing a place where utilities that held possession of used fuel materials could acceptably place those materials.

By outlawing recycling, the federal government asserted that the companies that had purchased the fuel did not actually own it because they were not allowed to view it as valuable or reusable.

By about 1978-79, the DOE had identified nine potential sites for a permanent geological repository. Yucca Mountain, a tuft ridge that was part of the federally owned Nevada Test Site was just one of those choices. Many scientists, including Dr. Allison Macfarlane, a geologist who served as Chairman of the Nuclear Regulatory Commission, and Dr. Jim Conca, a geochemist, former Yucca Mountain investigator and a fellow contributor to Forbes.com, believe that most of those candidate sites are better suited for a geological repository – from a geochemical point of view – than Yucca Mountain.

Politicians have a long history of failing to make decisions based on science. In 1987, Congress passed a bill that narrowed the list of candidate sites to one, identifying Yucca Mountain as the chosen site of the first geological repository.

That bill was pushed hard by two of the most powerful Democrats in Congress – Jim Wright Jr. (D-TX), serving as speaker of the House, and Tom Foley (D-WA), House majority leader. Both political leaders had candidate sites in their states. Neither was willing to take the political risk and potential heat of having the site that science and engineering selected as the best for the job.

In the 30 years since the bill selecting Yucca Mountain was passed, it has colloquially referred to as the “Scew Nevada Bill.” Nevada’s congressional delegation was too small and weak to resist. The issue was so important to certain power brokers in the state that it became the foundation on which Senator Harry Reid established and strengthened his power base. By continuing to send the same guy to Washington every six years, Nevada was capitalizing on the Senate seniority system.

Eventually, Reid became Senate majority leader, served a key role in electing President Obama, and was able to turn in a “you owe me chit” to get the project halted. During the 20+ years that it took Reid to move to the position of majority leader, Yucca Mountain became one of the most intensely studied geological formations in the entire universe.

More than $9 billion was spent from a fund created by a tenth of a cent fee assessed on every nuclear kilowatt hour generated. A substantial cadre of scientists, project managers and engineering support staff grew roots in the Las Vegas area and looked forward to lifelong continued employment in a project with no apparent end date.

After the project was halted through a coordinated effort between Senator Reid, President Obama, Steven Chu and Greg Jaczko, the ashes that remained from the decades worth of effort were spread out as far as possible. The information systems were decommissioned, the power was turned off, the office was eliminated, and the people were reassigned.

There were few political figures who were more polarizing than Harry Reid, so there is a large contingency of people who seem excited about doing whatever they can to disfigure any positive legacy that he might have had. They are willing to fight for Yucca Mountain just because it will be sure to anger the now retired Senator and his supporters.

Some segments of the nuclear industry have never gotten over the project’s demise. There are many different motives there. Nukes tend to be people that respect authority and follow rules. They point to the 1987 act in which Congress designated Yucca Mountain. Since it is the “law of the land,” they believe it would be best to follow it and get on with the job.

Others are more personally interested in Yucca. They liked living in the Las Vegas area, perhaps still own a house there, and would like to return.

Corporate leaders in segments of the industry also look forward to the tens to hundreds of billions of dollars that remain to be spent [collected] in order to complete the repository and move fuel material from its current locations in 30 different states to a location that is about as far from every reactor site as possible while still being inside the continental US.

There are many transportation links to build, numerous tunnels to dig, countless hours of lawyering to bill, and thousands of transportation casks to build. There are even some fancy titanium drip shields to fabricate.

According to a recent article in the Nevada Independent, there are also many political leaders and power brokers in Nevada who are gearing up for massive resistance using every tool in their considerable arsenal. Some nukes have have convinced themselves that the only people who are really affected by the project are those who live in Nye County. The rest of the state’s leaders don’t agree.

The Independent, which has promised to continue updating the article has collected statements from 16 leaders so far. The only one who supports the project is the Nye County Commission Chairman, Dan Schinhofen. No matter what the rule of law says, where there is such widespread opposition and so many legal issues needing resolution, the project is destined to be delayed to death. It’s been 30 years already and the opponents never dispersed their documentary weapons.

What Are The Alternatives To Using Yucca Mountain?

Without the prospect of near term competition from the federal government, two private entities – each with suitable sites for surface storage of used fuel containers – have made significant steps forward in the process of obtaining NRC licenses to accept and store used fuel. One potential site in Andrews County, TX has been under a licensing review for 11 months, the other site in Lea County, NM is scheduled to submit a license application for review to the NRC this month.

Many object to the notion of simply keeping used fuel in engineered containers at or near the earth’s surface, but that mode of storage is safe, affordable, accessible, and approved for a century or more by the NRC. There is no reason to seek a final solution now; there are numerous nuclear innovators at work who have indicated that they classify used nuclear fuel as a future resource that should be stockpiled, not buried.

What Is The Nuclear Industry’s Official Position?

The Nuclear Energy Institute has released a public statement from Maria Korsnick, its president and CEO, in response to the Trump Budget Blueprint.

The nuclear energy industry is encouraged by the news that the preliminary budget for the U.S. Department of Energy (DOE) includes funding to both re-start licensing activities for the Yucca Mountain nuclear waste repository and initiate a robust interim storage program. We’re committed to working with Congress and the administration to put the used fuel management program back on its feet. Until the government is meeting its legal obligation to accept the fuel, the industry will continue to safely and securely store it at our facilities.

What About The Rest Of The DOE Budget?

There is little or no good news in the draft budget blueprint that provides support advancing nuclear energy development. The nuclear weapons management complex and the clean-up programs seem to fare well, but there is no follow-on for the expired SMR program, ARPA-E is eliminated instead of expanded to cover nuclear, the Title 17 Innovative Technology Loan Guarantee Program is eliminated, and there are reductions in basic nuclear research conducted under the auspices of the Office of Science.

Ms. Korsnick made the following statement after being guardedly optimistic about the way nuclear waste is addressed.

On the other hand, the budget blueprint has energy innovators nervous. As the administration and Congress establish funding levels they need to remember that DOE programs historically have supported public-private partnerships to bring nuclear technologies to market because of the benefits the nation enjoys from a strong domestic nuclear energy industry. Reducing the nuclear energy research budget now would send a signal around the world that the U.S. government is ceding leadership to competitors like Russia and China, at exactly the wrong time.

It is time for a new generation of advanced nuclear reactors to meet growing global demand in a clean, reliable way. Time is running out for America to reclaim international leadership in nuclear energy and to create hundreds of thousands more jobs, all while reinforcing our nation’s electricity and manufacturing infrastructures. Capitalizing on this opportunity requires broad action from the executive branch on a number of fronts, including unquestioned support for the Title 17 Innovative Technology Loan Guarantee Program that supports construction on new reactors in Georgia, appointing a full complement of commissioners to the U.S. Nuclear Regulatory Commission and the Federal Energy Regulatory Commission, while moving decisively to address flawed electricity markets around the nation that fail to fairly value America’s fleet of nuclear reactors and the benefits they deliver.

A version of the above was first published on Forbes.com and is republished here with permission.