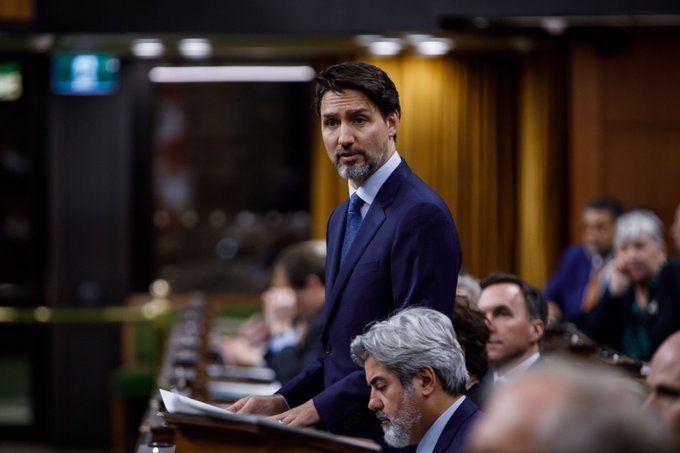 The Trudeau government is expected to release its long-awaited climate accountability legislation as soon as this week, complete with a formal commitment to net-zero emissions by 2050 and legally binding five-year targets along the way. But CBC says it won’t include the enforcement mechanism that climate policy analysts consider essential to make the plan work.

“Canada has set multiple emissions reduction targets in past decades and has never met a single one,” the national broadcaster notes. “It’s also on track to miss its current target by 77 megatonnes, according to the latest federal data from 2018.”

In March 2018, preliminary analysis by the Pembina Institute and San Francisco-based Energy Innovation put the shortfall at 161 megatonnes.

“Achieving our goals will certainly be challenging and will require leadership from every region of the country,” Environment and Climate Minister Jonathan Wilkinson told a Commons committee meeting last week.

The forthcoming legislation “is the first step in what sources tell CBC News will be a series of federal measures, rolling out over the coming weeks, meant to ensure that Canada lives up to its commitments at the UN climate conference in Paris five years ago,” CBC says. It was approved by the federal cabinet last month.

“Many environmentalists and climate policy experts in Canada look at legislation as a way to force current and future governments to make good on their climate promises—as long as the targets are set in law and are accompanied by carbon budgets that show how and when each jurisdiction would cut emissions.”

Ottawa is also expected to release a fiscal update this fall that will lay out the government’s plans for a post-pandemic recovery. “Sources say federal stimulus spending will intersect with the Trudeau government’s environmental agenda and could focus on transit, housing, and energy-efficient retrofits,” CBC reports. “Funding for those measures could come in the form of one-time or multi-year packages, but would not necessarily amount to permanent annual spending increases.”

While any permanent funding would be reserved for what CBC calls “centrepiece commitments” like child care and pharmacare, Ottawa is signalling that it will spend what it has to to get the country out of the emergency phase of the pandemic. “The risks of fiscal inaction outweigh the risks of fiscal action,” said Finance Minister Chrystia Freeland, in a recent speech to the Toronto Global Forum. “Doing too little is more dangerous, and potentially more costly, than doing too much.”

While the government’s climate plan was slowed down by the pandemic, to the frustration and consternation of many observers, the delay left time for another important piece of the puzzle to fall into place. With President-elect Joe Biden and Vice-President-elect Kamala Harris just 65 days from taking office in the United States, Toronto Star economics columnist Heather Scoffield says it’s time to deliver on Canada’s new climate strategy.

“If there were ever a time for the federal government to be extra ambitious on climate change, it’s right now—not just for the sake of global warming, but for the sake of our own economy, too,” she writes. “With Joe Biden heading to the White House armed not just with good intentions on climate change but some intense planning as well, Canada has an opportunity to take these policy pieces and surge ahead—or risk being leapfrogged in the global competition to corner the burgeoning clean energy market.”

The analysis echoes concerns from within the climate community, as Biden’s win combines with recent low-carbon action in China, other parts of Asia, and the European Union to bring a 1.5°C limit on average global warming within striking distance.

“If we’re caught flat-footed by a Biden victory, we may watch as entire sectors of our growing clean energy and cleantech sectors pack up and move to greener pastures in the U.S.,” Environmental Defence Executive Director Tim Gray warned in an August blog post. “Or they may just wither as they fail to secure the government support needed to commercialize innovations. This would be a nightmare for southern Ontario and B.C., in particular, where the cleantech industry has been thriving. Alberta has also identified this sector as an area of future growth.”