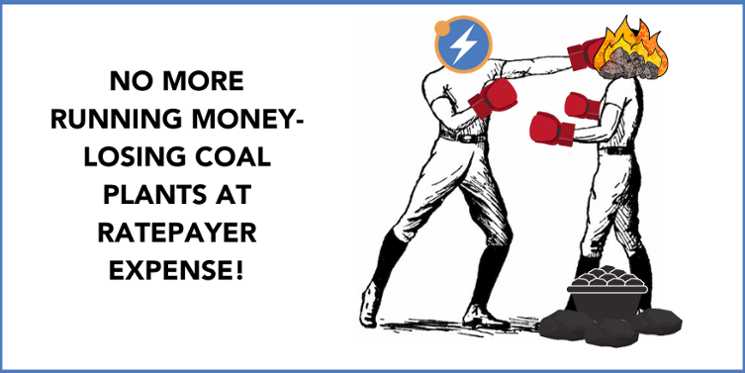 Over the past several months, our Indiana team has been intervening in a proceeding before the Indiana Utility Regulatory Commission (IURC) to examine Duke Energy Indiana’s coal self-commitment practices. Self-commitment refers to a process by which a utility instructs the regional market within which it operates – in this case, the Midcontinent Independent System Operator (MISO) – to dispatch the utility’s own resource unit regardless of whether or not it is the cheapest available at the time. Many vertically integrated utilities have been using this mechanism to run their expensive coal plants more frequently than economics would otherwise dictate. They do this because it is not their shareholders who suffer financial losses, but rather their captive ratepayers: When the cost to operate these units exceeds the market clearing price, utilities pass along the difference to customers, in part through fuel adjustment clause proceedings. AEE is working to curb this self-serving utility practice.

Throughout the fall of 2019, the time period covered by the IURC proceeding, this is exactly what Duke did with its Edwardsport, Cayuga, and Gibson coal-fired units. Analysis conducted by Berkeley Research Group (BRG) for AEE demonstrated that, in three months alone, Duke’s commitment practices cost ratepayers over $20 million more than if Duke had selected the least-cost option at all times. What’s more, Duke’s own Daily Profit and Loss Analyses predicted millions of dollars in losses – and Duke chose to run the units anyway. For rationale, it cited the “unique operating characteristics” of each plant and undocumented in-person daily decisions that consider “a number of factors.”

This is unacceptable. At the very least, Duke should be transparent and consistent in its decision-making to fully justify its unit commitment practices. We also know that if the utility were motivated, it could operate its units differently. Merchant coal plants offer a useful comparison. They are independently owned and obey all of the same physical and economic constraints as utility-owned plants, but have a much lower level of uneconomic dispatch. This is because their investors shoulder financial losses from uneconomic operation, instead of ratepayers.

Indiana law requires that utilities make “every reasonable effort to acquire fuel for its own generation or to purchase power so as to provide electricity to its customers at the lowest fuel cost reasonably possible.” Duke has violated this standard by routinely and knowingly self-committing its coal generation units at a financial loss.

In our rapidly evolving energy landscape, what formerly worked for Duke can no longer be assumed to be best practice. BRG’s modelling showed that Duke could save its ratepayers between $105.3 million and $423.7 million by 2025 if it transitioned its resource portfolio to one that includes greater levels of demand response, renewable energy generation, and energy storage. This finding is in line with what two other Indiana utilities, NIPSCO and Vectren, have found in their most recent Integrated Resource Plans (IRPs). Duke has just begun its 2021 IRP process, making this the perfect time for Duke to plan for a significant, near-term shift toward advanced energy resources instead of sticking its customers with the bill for running outmoded power plants.

In the current proceeding, our proposed order and brief call for a number of specific remedies for Duke’s self-commitment practices:

These seasonal shutdowns are becoming increasingly common for coal plants that remain in operation today, including those that participate in the MISO market and in circumstances substantially similar to that of Duke and its coal fleet. In late 2019, Xcel Energy filed a plan (approved in July, 2020) with the Minnesota Public Utilities Commission to begin seasonally and economically dispatching its Allen S. King and Sherco Unit 2 coal plants into the MISO market. Xcel estimates that it will save between $8.5 million and $28.5 million annually on fuel costs alone, $18.4 million in total operation and maintenance costs, and over $27 million in capital costs. In fact, in its 2020 Review of the Commitment and Dispatch of Coal Generators in MISO, the MISO Independent Market Monitor suggested seasonal outages would likely be beneficial for a number of MISO utilities to consider.

Today, we are at a pivotal moment in the energy transition. Expensive, older coal assets were simply not designed to respond in real time to market price and demand signals, and are increasingly out of step with a newer, more dynamic system. The practice of allowing coal plants to operate at an economic loss and recovering those costs—even occasionally—raises electricity costs for Indiana ratepayers and deprives Hoosiers of the benefits of readily available lower-cost, highly reliable advanced energy resources. We hope the Commission agrees.