Seems like someone forgot to tell California that cap and trade was dying an untimely death.

California and US flag image via Shutterstock

The state’s third carbon allowance auction was held last week, and businesses snapped up all available 2013 permits, setting a record price level in the process. In addition to the 2013 permits, over three-quarters of advance allowances for 2016 were sold to businesses.

With just over six months left until California links up to Quebec’s cap and trade market through the Western Climate Initiative, the system’s growing strength is apparent and stands as yet another example of how the EU Emissions Trading System’s collapse isn’t the end of cap and trade.

Permits Selling Out, For Record Prices

The May 16 auction was California’s third, and sold more than 14.5 million allowances for $14 per ton. Permit prices have continued their brisk rise, increasing from $10.09 in the first auction held November 2012 to $13.62 in the second auction held in February 2013. Every auction held to date has sold out of all current allowances offered.

Following the auction, California allowances were trading up at $14.50 on the IntercontinentalExchange secondary market.

Roughly 50 million allowances have now been sold through the auctions, raising $256 million for clean energy investments in California, and $556 million for the state’s largest utilities to protect ratepayers from energy bill price hikes.

However, California’s market revenue has become controversial in recent weeks, perhaps a victim of its own success. Governor Jerry Brown has proposed borrowing $500 million from current and future cap and trade revenue to help balance the state’s general fund budget. By law, allowance auction revenue is supposed to be directed toward either reducing emissions or increasing clean energy investments with a specific 25% carve-out for disadvantaged communities. 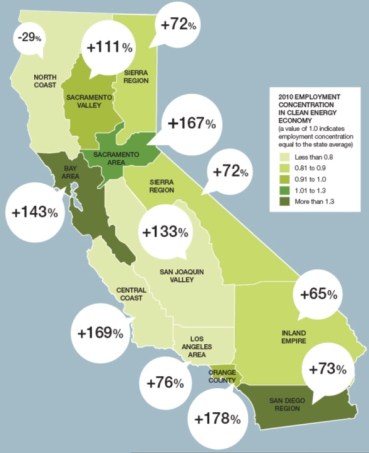 The California Air Resources Board, which manages the system, is considering how it directs revenue in its draft investment plan, and data indicates it would be wise to continue steering revenue toward the clean economy.

A recent report from the Environmental Defense Fund found investments in the state’s clean energy sector added jobs 178% faster than other economic sectors since 1995. In addition, California’s green jobs were more resilient than the economy as a whole, either growing or remaining stable during periods of overall job losses.

And Here Come The International Linkages

But while cap and trade has been a boon for California, its success may be about to spread. After a short delay, the system is set to link with Quebec’s cap and trade market on New Year’s Day 2014, a step that could help build the growing global carbon market.

In a recent interview, Quebec’s environment minister not only indicated the linkage would create new demand and keep allowance prices high, but also hinted the system had learned from Europe’s mistakes and would eventually link with new carbon markets outside of North America.

Critics continue to lament EU price failures as evidence of cap and trade’s impending doom, but I just don’t see it. At what point will the growth of carbon trading in California, the US Northeast’s Regional Greenhouse Gas Initiative, South Korea, China, and even countries as remote as Kazakhstan turn the tide of opinion?

California’s Third Cap And Trade Auction Sells Out, At Record Price was originally published on: CleanTechnica. To read more from CleanTechnica, join over 30,000 others and subscribe to our free RSS feed, follow us on Facebook (also free!), follow us on Twitter, or just visit our homepage (yep, free).

Unfortunately CA State Government raiding of carbon allowance funds was very predictable.  Re. my past post on the subject.  Possibly linking CA carbon allowances to world market is also problematic.  Re. my past post on this subject.  The problem with existing cap-n-trade programs is that they are based on Government emission allowance certificates that do not directly represent the actual cost to reduce existing carbon emissions.  The EU carbon credits sell for less than $10/MT and CA’s recent $14/MT.  Actual average and fully amortized costs to reduce actual current carbon emissions are on the order of $50-$100/MT.  Re. my past post on this subject.  The impact of $10-$14/MT carbon credits is basically a small increase in fossil fuel energy costs (i.e. more of a consumption tax) and related consumer goods and services.  If Governments were truly serious about reducing their current carbon emissions they need to directly base their programs on actions that actually replace fossil fuels energy and associated carbon emissions with lower (and unfortunately more expensive) or zero carbon alternatives.

Those that appear to have benefited the most from the recent CA carbon allowance auction are the Traders and Hedge Funds.  Buying carbon allowances at $14.00 yesterday and trading/selling them for $14.50 today is an amazing short-term profit margin (3.6%) for a couple days work.

Lewis, thanks for the feedback.